Hermann Wellenreuther (ed.): The Revolution of the People. Thoughts and Documents on the Revolutionary Process in North America, 1774-1776, Göttingen: Universitätsverlag Göttingen 2006 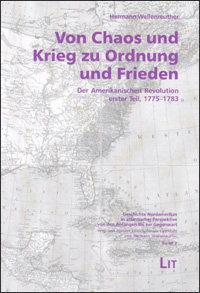 This is the third of four volumes that Hermann Wellenreuther is contributing to the series Geschichte Nordamerikas in atlantischer Perspektive. It is an ambitious undertaking and Wellenreuther's commitment as the sole author covering the early 17th century to the end of the 18th century is formidable in its breadth and admirable in its achievement. This tour de force of early American history writing can be seen as the crowning legacy of a historian whose publications explore historical issues of early modern Germany, Britain, and America. It is also an indication of the end of the era for big history books.

Contrary to the preceding two volumes, Der Amerikanischen Revolution erster Teil deals with only a short period of time and yet it is equal in length. This difference between time covered and book length speaks to the importance of the American Revolution up to 1783, when the United States was formally recognized as a sovereign nation (the second part, 1783-1788, Volume 4 in the series, focuses on the American Constitution). Despite the short time span, the task of presenting the story and significance of the American is a daunting one because of the prodigious number of publications that trace the historiography of this transformative event in all of its complexity.

Wellenreuther began conceptualizing this book by building on the history his teacher, Erich Angermann, to whom it is dedicated, had prepared. It became clear, however, that Angermann's work could not simply be updated but required rethinking. Wellenreuther's recasting draws attention to the centrality of the Continental Association and especially the Committees of Inspection and Observation to the revolutionary process. The revolutionary movement, much more than its ideology, was urban as well as rural in scope in which large numbers of ordinary men participated. This is the book's main thesis (for a non-German reading audience Hermann Wellenreuther, The Revolution of the People: Thoughts and Documents on the Revolutionary Process in North America 1774-1776. Göttingen: Niedersächsische Staats- und Universitätsbibliothek 2006, captures much of his thinking about the revolutionary process in English).

The content of the book therefore unfolds from a discussion of the revolutionary process in locales throughout the colonies and how it shaped disaffection from established authority, fomented revolutionary ideas, and paved the way for dismantling the monarchy in North America and for making new constitutions (Chapter 1).

The course of the "War for Independence" is the focus of the second chapter, which portraits the military conflict as a multi-faceted struggle, including clashes along ideological lines between Tories and Whigs, terrorist violence in the backcountry of the several colonies, and hostilities between colonists and Indians centered on the use and ownership of western land.

The effects of war on communities are discussed in chapter three, ranging from the dislocation, devastation, and deprivation people suffered to debates about how to rebuild and redefine local life on the basis of republican, or civic, virtue. How these discussions, foremost among them the states' newfound claims to sovereignty, played out "nationally" in the Continental Congress is the topic of chapter four. It is followed by an analysis of the constitution-making process in all of the original states - an American achievement of extraordinary dimension that rests on the innovative concept of the sovereignty of the people (Chapter 5). The concluding chapter provides a truly Atlantic perspective in that it details how the new United States was beginning to articulate a foreign policy in relation to the constellation of power among European states and imperial interests.

The significant spread of the revolutionary process as fueled by constitution making in each state is the major topic that is embedded in the chronological narrative and determines the interpretative framework. How well the audience will follow the story and accept Wellenreuther's explanation depends on the interest and degree and scope of specialized knowledge of the reader. The nature of the discussion about the perspective of the American Revolution offered here is likely influenced by the significant differences in the ways professional historians are trained, employed, and rewarded in Germany and the United States. Participation in the debate is less a question of language, German and English, but more a reflection of the unequal size and characteristics of the groups in those two countries with interest or expertise in the period.

The organization and production of the book, including its apparatus (illustrations; maps; graphs and tables; footnotes; appendices; bibliographies; and index), require the reader to pay close attention. The foreword and epilogue do not replace the need for a comprehensive introduction that would have provided the contextual framework for the book and created transitions to the preceding and succeeding volumes, assuming that the monograph is meant to stand by itself and not only as part of the series. An extensive introduction could have discussed the historiography of the American Revolution more fully than the references to it in the text and footnotes; it could have made a case for the comparatively short treatment of religion, women, and African Americans; it could have explained the rationale and methodologies for the graphs and tables (often poorly presented and in several instances awkwardly split between text and appendices); and it could have addressed the thinking behind the bibliographic selections. The discrepancy between evidence of truly impressive knowledge of the period's primary and secondary literature makes obvious holes in the reading lists the more baffling - not simply a sign of disregarding studies published during the final stages of writing. The reproduction of the historical maps (and illustrations) is better than in the earlier volumes but the lack of modern, easy-to-read maps of North America and Europe is regrettable. The index is adequate, albeit a bit awkward to use because of differences between German and English terms.

Von Chaos und Krieg zu Ordnung und Frieden is a book in the tradition of a Handbuch that offers German advanced graduate students a valuable introduction to the archival and interpretive richness of the revolutionary period. Historians in Germany developing lectures about American history will find it a useful guide and reference. For specialists in the field the reading is likely to entail pleasure at the distinctive perspective this distinguished historian provides as well as frustration about the highly selective point of view with which he conceived and crafted the narrative. Ultimately, this book - by itself and as part of the series - will stand as a monument to a time when print publications disseminated scholarship and advanced the field as opposed to internet-based web pages as the preferred medium for digitized records, analyses, interpretation, and discussion in the foreseeable future.