Margaretta M. Lovell: Art in a Season of Revolution 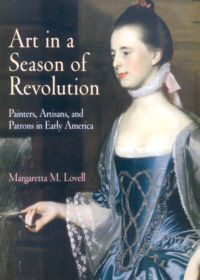 The broadness of this book's title suggests that it might be a comprehensive survey of late eighteenth-century American art. Instead, the study examines a relatively select number of objects in depth, primarily painted portraits that are already widely recognized as significant, but also some prints and furniture, all chosen for their ability to reveal important aspects of the evolving New England art world in the period just before the American Revolution. Lovell explores a tremendous variety of contexts through these objects, from intricate familial, social, and economic relationships of the artists and their subjects, to the origin, trade, and consumption of materials that are either pictured in or physically comprise the objects themselves. An amalgam of essays that Lovell published from 1987 to 2000, plus two new chapters, the book presents a dense and sometimes fascinating view of artistic production and consumption in Colonial America.

Lovell makes clear from the beginning that her interest lies in how these objects functioned "as actors in the theater of social values". She strives to give "equal play to the lives of the makers and to the lives of the objects they made", and explains that she is studying "the interdependent social and economic webs linking local and distant populations of workers, theorists, suppliers, and patrons throughout the mercantile Atlantic". Drawing upon a wide variety of sources, from genealogical records, maps, and period letters to more recent histories of fashion and visual theory, she ultimately crafts a nuanced probing into both the aesthetic qualities of her chosen subjects and their larger, deeper, implications, especially in regard to the art world in which they functioned. Ultimately the "Season of Revolution" phrase in the book's title is slightly misleading since issues of family and hierarchy emerge as more compelling overarching themes and avenues of inquiry in the book than do the unprecedented political events in the late eighteenth-century American colonies.

Even as Lovell's chapter titles and their ostensible topics emphasize thematic issues rather than the work of particular artists, all but one of the book's seven chapters still focus on well-known portraits by the most prominent artists of the era - Benjamin West, John Singleton Copley, and Charles Willson Peale, most notably. No study of American art of the Revolutionary period would be complete without works by these artists, and Lovell's research does make a number of original contributions to the existing discourse about them. At the same time, however, including more work by more less-well known painters would provide welcome diversity and freshness. Styles and types of imagery that do not fit Lovell's larger thesis, such as folk art whose rules of composition "differ from those common in the urban centers of Boston, Philadelphia and London" are summarily dismissed even though their ties to family relationships are no less intriguing than in the works she examines. This elision undermines Lovell's larger claims of unraveling the webs of interplay among patrons, artists, workers, etc.

Lovell's seventh chapter does depart from the predictable canon with a case study on the building and marketing of cabinet furniture in the important center of Newport, Rhode Island, but this discussion feels significantly disconnected from the earlier chapters since it deals with an entirely different medium than the rest of the book even though it continues the overarching themes of patronage, familial relationships of makers, and the aesthetics of the objects themselves. An additional chapter devoted to some entirely different medium might have solved this disconnect and made the study an even more encompassing inquiry into the artistic complexities of the period.

Art in a Season of Revolution ultimately focuses on how objects signify meaning in a myriad of ways, both theoretical and otherwise, but Lovell does ground her discussions and her investigations on close readings of the visual imagery. Integration of object and ideas is fundamental to her method, and the interrelationships of idea and image, which she consistently emphasizes, substantially solidify the efficacy of her conclusions. She finds significance in several instances in "pictures within pictures" - either drawings or paintings which are included within the pictorial imagery she examines and these are used as tantalizing clues that lead us on revealing journeys through the paintings' histories, their origins, and ultimately to new insights about their role in the larger scheme of the painting itself, the importance of that work in its own time, and in our own.

Some of Lovell's discoveries are groundbreaking, fundamentally altering long-held assumptions about the works they address. In the case of several portraits by John Singleton Copley that depict different women in identical poses and gowns, for example, Lovell convincingly demonstrates that the striking visual similarities in these paintings were hardly the simple result of the painter's use of stock models and costumes, nor were their analogies the result of expedient short cuts that relied on the sitters' ignorance of the other, nearly identical images for acceptance. Instead Lovell offers painstaking evidence ranging from aesthetic theories and practices of the time and familial relationships of the sitters to the intricacies of dressmaking in the period, that demonstrates not only that the sitters knew each other well, but also that they were fully aware and even desirous that their portraits would resemble one another. The visual analogies ultimately were a conscious emulation designed to strengthen bonds among those portrayed and reinforce social and class hierarchies in a very visible way. Lovell's argument is not only convincing, but even startling and revolutionary since it fundamentally alters many of our long-held understandings about images and how they were regarded in late eighteenth-century America. The portraits indeed "marked and negotiated critical relations in communities". This demonstration of visual imagery's power to effect culture, something she does a number of times throughout the book, is one of Lovell's most significant contributions.

Although Lovell often brings more detail to her explications than many other art historical studies that emphasize similar contexts (and sometimes more than is necessary to make her points), neither her methodology nor ultimately her larger conclusions are especially unique, despite her frequent claim to be departing from what she calls the "diachronic, developmental ameliorative armature" that characterizes "most" art history and its emphasis on "authentication, connoisseurship, biography, and descriptive formalism". While these sorts of approaches might have prevailed when the earliest of Lovell's chapters was published in the late 1980s, the past two decades have brought significant changes to scholarly discourse, and such aspersions not only slight those real achievements, but also distract from those in Art in a Season of Revolution since they are often inaccurate and unnecessarily contentious. Another criticism of the text is that at the same time as Lovell's research is exhaustive and at times fascinating, her presentation is unfortunately burdened by a writing style that can be wordy and even pedantic, with frequent reiterations of what chapters will do, are doing, or have done. Less emphasis on continually explaining the book's organization and how various points relate to others would liberate readers to become immersed in the art itself and Lovell's many excellent observations and discoveries, rather than weighing down with a persistent and sometimes tediously intrusive authorial voice.

Art in a Season of Revolution is not likely to appeal casual students of art history, but despite its challenges will take its place on the essential shelf of any serious scholar of American art since it delves so deeply into some of the field's most important fundamental works with insight and diligence.