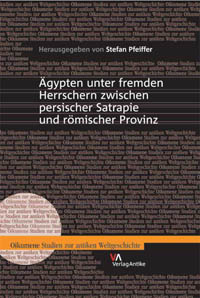 For most of the almost two century long history of Egyptology, the so-called "Late Period" and Greco-Rome Egypt have been viewed as periods of decline - the "Long Dying" in the characterization of one Egyptologist [1] - in which Egyptian culture stagnated during more than a millennium of foreign rule, broken only by a short-lived Renaissance during the 26th dynasty. Not surprisingly, scholarship on this period was also limited. Recently, however, there has been renewed interest in the "Late Period" which has also led to a more positive evaluation of Egyptian culture during this period. "Ägypten unter fremden Herrschen zwischen persischer Satrapie und römischer Provinz" is a valuable addition to this scholarship.

The eight papers in the volume were originally delivered on May 17, 2005 at the University of Trier as part of a project on the general theme of "Origin and Development of a Multicultural Society in Greco-Roman Egypt." Most of the new scholarship has dealt with the socio-economic and cultural history of Late Period Egypt. The particular contribution of the excellent papers in this volume is that they treat the defining characteristic of Late Period Egypt: its experience as conquered territory from the Persian conquest in the late sixth century BC to the end of antiquity.

The book opens with two articles dealing with Egypt under Persian rule, which are welcome additions to the sparse scholarship on Persian Egypt. In "Initiatoren und Träger der Aufstände im persischen Ägypten", Marc Rompeter surveys the history of revolts in Egypt from the reign of Darius I to that of Darius II, analyzing the unsuccessful revolts of 522 BC, 486-484 BC, and 463-454 BC, and the successful revolt of Amyrtaios in 404 BC, which re-established Egyptian independence. While the limitations of the sources allow only detailed analysis of the so-called "Inaros revolt" of 463-454 BC, the author's careful study significantly clarifies our understanding of the nature of these revolts, establishing 1. that except for that of Amyrtaios, all were confined to Lower Egypt, 2. that none were responses to famine or manifestations of Egyptian "national" feeling, and 3. that the impetus for, at least, the "Inaros revolt" came from outside Egypt, specifically from Athens which sought to use Egypt as a second front in its ongoing struggle with Persia and the ambitions of Libyan dynasts such as Inaros, whose relationship, however, to the Persian government of Egypt remains to be explained.

Hilmar Klinkot examines in "Xerxes in Ägypten: Gedanken zum negativen Perserbild in der Satrapenstele", the negative image of Xerxes in the Satrap Stele. In so doing, he convincingly resolves the problem in understanding the narrative of events in the Satrap Stele resulting from the gap of over a century between Xerxes' alleged seizure of sacred land at Buto and its return in the 330s BC by Chababash by demonstrating that the Satrap Stele's reference to Xerxes is not historical but an example of a topos portraying Persian kings as temple robbers. Less convincing, however, is his claim that the topos is solely of Greek origin, traceable to Herodotus, since it is already present in the Elephantine Papyri, suggesting that the Greek tradition may also have Egyptian roots.

The final two historical papers deal with the status of Alexander the Great and the Seleucid king Antiochus IV in Egypt. In "Alexander der Grosse: Pharao und Priester", Donata Schäfer explores an important but little studied problem: the relationship of Alexander and the Egyptian priesthood. Although Alexander probably was not crowned king during his brief stay in Egypt, Schäfer argues that analysis of the surviving examples of temple structures built or restored - particularly at Thebes - during Alexander's reign indicate that Egyptian priests viewed him as a legitimate Pharao, who fulfilled the king's primary duty of preserving Egypt from chaos. Specifically, the iconographic and textual programs of constructions built in Alexander's name at Karnak and Luxor temples reflect a traditional "kult-theologisches Konzept" emphasizing Alexander's legitimacy as Pharao and associating him with great rulers of the Egyptian past, particularly those of the New Kingdom.

In contrast to Alexander, the status of Antiochus IV as Pharao has been the subject of considerable scholarly controversy. Although Porphyry as quoted by St. Jerome explicitly claimed that Antiochus was crowned king while in Egypt, most scholars believe that a formal coronation is precluded by the evidence of Polybius. In "Antiochus IV. Epiphanes: Basileus und Pharao Ägyptens? Porphyrios und die polybianische Überlieferung" - a paper that is a model of source analsysis - Andreas Blasius convincingly argues that the situation is more complicated, demonstrating that, while too fragmentary to positively exclude the possibility of a coronation, the fragments of the Polybian tradition clearly indicate that Polybius agreed with Porphyry: 1. that Antiochus' claim that he intervened in Egypt to protect the rights of Ptolemy VI was fraudulent, 2. that he intended from the beginning to seize control of Egypt, and 3. that he acted as king while in Egypt.

The last four articles in the volume deal with relations between Greeks and Egyptians in Greco-Roman Egypt, the sort of questions that rarely allow for clear-cut answers. In "'Für das Leben des Königs': Kultische Loyalitätsformeln im hellenistischen Vergleich", for example, Domagoi Gladic establishes through a meticulous analysis of Greek and Demotic dedicatory inscriptions that the absence of an Egyptian equivalent for the Greek phrase "for the life of King X" in Demotic inscriptions is probably better explained by resistance to innovation in a traditional Egyptian epigraphic form than by a reluctance to explicitly declare loyalty to a Ptolemaic ruler, a conclusion that is reinforced by comparison with contemporary Babylonian dedicatory texts, which, following Mesopotamian tradition, indicate that dedications were made "for the life of" the Seleucid king.

More ambiguous is the situation described by Daniel von Recklinghausen in "Anspruch und Wirklichkeit: Ptolemäische Beschreibungen der Stadt Theben." Thus, the author argues that, while Ptolemaic temple texts, following a tradition dating back to the New Kingdom, routinely describe Thebes as the first and most important city in Egypt, it is not possible to conclude that the discrepancy between the Theban priesthood's view of Thebes and the city's actual status in Ptolemaic Egypt was a significant factor in their decision to support the revolt of the native kings Herwennefer and Ankhwennefer in the late third century BC, since the priests also collaborated with the Ptolemies, when it was to their advantage.

Even more surprising, Stefan Pfeiffer highlights in "Zur Einquartierung von Soldaten des ptolemäischen Heeres: Rechtsgrundlagen, Konflikte und Lösungsstrategien" the ambiguities in what would seem to be the clearest example of Macedonian oppression, the forced quartering of soldiers on Egyptian households, illustrating how both Egyptians and soldiers exploited royal regulations and the government's desire to avoid ethnic conflict to subvert the system, the former even using the dynastic cult to resist quartering and the latter to convert what was officially royal property into private property.

The volume concludes with Heinz Heinen's fine study, "Ägypten im römischen Reich: Beobachtungen zum Thema Akkulturation und Identität." Drawing on epigraphic and onomastic evidence, Heinen convincingly argues that the Roman conquest of Egypt in 30 BC did not represent as sharp a rupture in Egyptian cultural history as the Christianization of Egypt in late antiquity did, since Augustus and his successors continued the Ptolemaic policy of representing themselves as Pharao while Egyptians used Greek forms and names to fashion identities in accordance with Egyptian tradition.

All scholars interested in the Late Period will be interested in "Ägypten unter fremden Herrschern zwischen persischer Satrapie und römischer Provinz". Moreover, since the bulk of scholarship on Persian and Greco-Roman Egypt is based on classical sources, the authors' use of Egyptian evidence is particularly welcome.