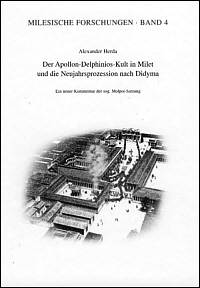 Ever since its first publication a little more than a hundred years ago by Ulrich von Wilamowitz-Moellendorff ("Satzungen einer milesischen Sängergilde," Sitzungsberichte der Preussischen Akademie der Wissenschaften 1904, 619-640), the Milesian inscription known by such titles as the "Molpoi Decree" has deservedly attracted much scholarly attention. As a result, much that needed explanation has been explained; but other aspects of the inscription have defied, and likely will keep defying, wholly conclusive explanations. Many significant scholars of Greek religion have discussed the text over time; specific points, such as the identity and form of the so-called gylloi, have become the center of specialized scholarly debates. This massive tome of more than 500 pages attempts to treat all aspects of this venerable document. The author and his work are doubtless up to the challenge but, in the face of such a large volume, some skeptical reader might not be able to resist asking a daunting question in the back of his or her mind: Does a 45-line inscription, significant as it is, justify a study over 500 pages long? In all fairness to the author and his scholarly achievement, it seems that such a question must be set aside when discussing the present volume.

In addition to a preface, list of abbreviations, prologue (IX-XIV), and an introduction (1-7), the work consists of 10 parts. Part I (9-14) presents the text of the inscription with an apparatus and a German translation. Part II (15-20) contains a valuable discussion of the dating of this multi-layered composite text. Part III (21-30) tackles the question of the circumstances surrounding the finding of the inscription and its original disposition. Part IV (31-424), the bulk of the book, contains an extremely detailed continuous systematic commentary on the text, covering practically any minor or major subject encountered in it, and it also features four excurses (the Delphic paian competitions, 112-115; the sacrificial meal, 150-152; a comparison between the Milesian basileus and the Athenian archon basileus, 234-237; and the title delphinios, 272-277). The sheer bulk of this exhaustive commentary precludes detailed discussion of it here. I note that Herda's discussion of the gylloi (especially 249-259) is very convincing. Part V (425-442) conveniently summarizes points regarding the history of the text and its contents. I note that table 1 (426), which lays out the dating of the parts of the inscription according to A. Rehm and to the author, is particularly enlightening. Part VI (443-445) is a line-by-line systematic overview of the text. Part VII (447-461) deals with the respective relations between Apollo Delphinios and Apollo Didymeus, Miletus and Didyma; it also enumerates desiderata for further research. Part VIII (463-471) features three useful tables treating sacrificial vocabulary. Part IX (473-509) contains four indices: two source indices, literary and epigraphic, a general index (with an added index of modern authors), and an index of Greek words (where the reader is occasionally referred back to the general index). The work concludes with plates (part X, 511-543) including excellent detailed photographs of the inscription.

Real criticism - should it be allowed - concerns form rather than substance. Experience may have taught some of us that publishing a given work with a given publisher and/or in a given series is likely to entail acceptance of editorial policies - rather idiosyncratic at times - with which one may personally be at odds and which do not always benefit the final product. Without detracting from the author's achievement, I note in this specific case the substitution of a general list of abbreviations for a general bibliography. One could ignore this feature but, as we deal here first and foremost with an edition of an epigraphic text, it would have been desirable that a complete lemma, listing not only editions (9) but also discussions of the text (with inclusive page numbers) - one of the backbones of epigraphic publications - be included. The author may well not be responsible for this, but the inclusion of such standard list of discussions would have made the work much more user-friendly. In addition I note that, as is common in epigraphic publications, it would have been desirable to have at least a concise description of the stone with measurements right before the text (in all fairness to the author, his discussion of this subject in part III should not have preclude the inclusion of such a feature). A personal pet peeve of the present reader is the occasional use of "f." and "ff." instead of inclusive page numbers, but this matter is also a personal, editorial, or (dare one say) cultural choice. Again, these three items of criticism do not undermine the author's accomplishment and I note again that the fault here may not even be his

We have left as yet unanswered the question of whether a 45-line inscription, important as it is, merits a more than 500 page book. Opinions may vary. But even those to whom the answer might not necessarily be in the affirmative must lay aside differences of opinion and recognize the author's achievement in treating thoroughly this significant and difficult text. Herda has provided the interested public with a well-balanced and useful work and must be congratulated for doing so. His book will doubtless prove useful not only to those interested in this specific inscription, but also to anyone interested in Milesian history and to scholars of Greek religion in general.