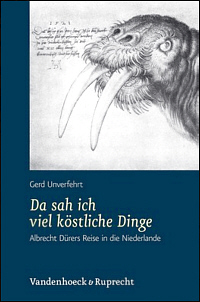 Artists' diaries compel precisely when they turn away from art, when they document the quotidian, the mundane, the surprisingly human. Pontormo's tells us how many fried eggs he ate for supper; Warhol's what television programs he watched before bed, and Albrecht Dürer's - the subject of Gerd Unverfehrt's exacting new study - how much (for example) he paid an apothecary when his stomach hurt. Albrecht Dürer's diary of his travel through the Netherlands in 1520/1521 is one of the best-known primary sources in the history of Northern European art, but has long frustrated scholars seeking theoretical disquisitions or high-flown analyses of paintings. Instead the Netherlandish Tagebuch is essentially a list of expenses Dürer incurred, "a ledger", as one early translator put it. [1] This patchy record of sums, sites, and conversations, however, is also unusually rich in reflections on Lutheranism, prices, local customs, and above all people (during his travels Dürer was also filling a silverpoint sketchbook with portraits and nature studies, which survives today in Berlin). Unverfehrt's superb work is less a new edition of the diary (it was first published in 1779) than a line-by-line reference supplement to Dürer's enigmatic journeys.

On Thursday, 12 July, 1520, Dürer left Nuremberg for Aachen. Then a mature artist (49) at the height of his powers, Dürer's ostensible purpose was to renew his pension with the Hapsburg emperor, Charles V. Accompanied by his wife Agnes and maid Susanna, however, Dürer stayed in the Low Countries for a year - drawing, painting, collecting, socializing, (occasionally) gambling, bartering, and selling artworks, mostly woodcuts and engravings by himself. He dined with dignitaries in Brussels and Mechelen, gifted copies of the Melancholia and the Adam and Eve, guardedly praised paintings by Hugo van de Goes, Hans Memling, and marvelled at Jan van Eyck's Adoration in Ghent. He received a tiny Joachim Patinir panel as a gift from the town secretary of Antwerp.

Unverfehrt, going against what Erwin Panofsky influentially suggested more than fifty years ago (when he was exactly the same age as Dürer during his travels) [2], asserts that business was the immediate focus of Dürer's journey in 1520. Wanderlust and art tourism were only secondary (distinctions between these poles were, to be sure, questionable in early modern Europe). After a useful historiographical survey and a lexical study of the surviving manuscripts, Unverfehrt points out how the Netherlandish trip was different from Dürer's other travels - particularly his youthful journeys to Italy in 1494/5, and 1505/7. Where these were essentially grandiose Wanderjahre, the Netherlandish trip - where Dürer was, for the first time, accompanied by his wife - appears to have been "tacked-on" to the pension affair. Dürer was interested in local sites, certainly, but the diary constantly laments the "grossen Mühe und Arbeit" besetting the whole enterprise.

It becomes clear that Dürer was far from unhappy, however. Unverfehrt's seventeen short chapters are devoted to the individual cities he visited and the material specifics of what he saw. Antwerp, where Dürer stayed four times, looms large: Dürer is honoured with a reception at the St Lucas guild, he visits Quentin Massys' house (but Massys is out), he goes to see the preparations for the 1520 blijde inkomst of Charles V, he is received at the Fugger palace, he gives more than twelve of his own engravings to the Portuguese factor.

Art historians Friedrich Leitschuh, J.-A. Goris and Georges Marlier have covered this material before; Unverfehrt's contribution is to expand the level of contextualization immensely, to move the focus away from Dürer alone to his cites and patrons. Every person mentioned in the diary receives a paragraph-long, footnoted biography, and every artwork named a full discussion (particularly excellent here is the analysis of Dürer's reaction to the Cologne cathedral in chapter 7). Specific incidents - like Dürer's failed attempt to see a beached whale in Zeeland in December 1520 - become the subject of mini-essays. Unverfehrt occasionally strays from his stated job as an annotator and digresses - as in chapter 9 - somewhat imaginatively, into the history of beached whales in the Netherlands. There is a bit of a kitchen-sink effect here, as lose sight of the relevance to Dürer, or his diary. Undercompensation exists too: when Dürer, dumfounded in September 1520 by the New World curiosities he is shown in the Brussels town hall - among them a feather shield brought by Cortez and, as he describes it: "gar seltsame Kleidung, Bettgewand und allerlei wundersame Gegenstände zu mancherlei Gebrauch" - Unverfehrt says little. More background on the Mexican objects would have been welcome.

Far more effective is the small essay in chapter 13 on the "Lutherklage", Dürer's much-excerpted outcry, in May 1521, against the (imagined) imprisonment of Martin Luther. This is a statement traditionally taken as evidence of the artist's Protestant sympathies. The authenticity of this passage in the diary has been doubted [3], but Unverfehrt, perhaps judiciously, takes no sides. He does later point to Dürer's purchase, while in Antwerp in 1521, of both pro- and anti-Lutheran Traktätlein, and argues the Klage, if it is genuine, is best seen in the context of late medieval devotion. Dürer, Unverfehrt's little essay argues, was hardly a religious radical.

Ultimately the most interesting parts of Da sah ich for both the general reader and the specialist are the last three appendices, all related to Dürer's collecting. Unverfehrt charts the engravings, etchings, and woodcuts Dürer dispersed (including works by Hans Baldung). Particularly interesting are the objects Dürer obtained for himself (Unverfehrt lists where they were bought, given as gifts, or traded). The tabulations are fascinating: we learn that the artist took home (among other things) three different kinds of horn (ox, buffalo, cow), six Netherlandish maps, a saltcellar, a magnetic stone, tortoise shells, coral, dozens of books, and an entire set of engravings by Lucas van Leyden, whom he briefly met ("ein kleines Männchen"). A minor, minor quibble in this respect is the book's utter avoidance of any comment on the actual conditions of early modern travel or exchange. These occupy an enormous part of the diary - Dürer speaks on nearly every page about prices as well as about ferries, inns, and horses, how much he paid to watchmen and what his food and drink cost. Unverfehrt, understandably, has less interest in such matters since little of their specifics can be firmly reconstructed. But to claim, as the book's introduction does, that the Tagebuch is valuable as a "kulturgeschichtliches Dokument" would seem to make at least some attention to such topics mandatory.

Why do artists travel? If in his writing Dürer remained reticent on how he thought about the "exquisite things" he saw on his travels - walruses, whales, Portuguese merchants - Unverfehrt's book (which takes this Dürer phrase for its title) seizes uncritically on the reconstruction of what those things were. Unverfehrt has supplied an textual counterpart to the silverpoint sketchbook in Berlin (pages from which are lavishly reproduced throughout). It is a work that will become indispensable for any Dürer scholar, largely for what it shows us about everything except the master's art.