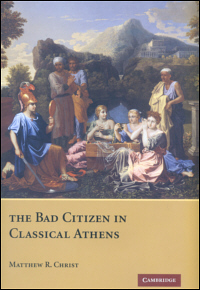 The declared purpose of this book is to offer a fresh perspective on Athenian democracy (508/7-322/1 BC) by exploring bad citizenship in this society, both in reality and as an idea. In pursuit of this aim, Matthew Christ has chosen to discuss solely three topics: draft evasion, cowardice on the battlefield and the avoidance of financial obligations. In making this choice, he has elected not to deal with a long list of practices that meet his own definition of bad citizenship (we might instance squandering the family inheritance, taking bribes, embezzling public funds, being politically apragmon, disrespecting the gods, neglecting elderly parents, indulging in illicit sexual practices, cheating in the agora and sycophancy). We are therefore entitled to ask why a book that deals with such a limited area of its supposed subject bears a title that promises to examine the whole of it.

This misrepresentation is symptomatic of much of what follows. The analytical categories suggested by Christ cannot be regarded as logically or acceptably defined. He appears, moreover, unfortunately to have overlooked insights and methods of analysis developed in adjacent disciplines that might have alerted him to the implausibility of his conclusions. These choices have resulted in a work riddled with inconsistencies and contradictions. It is probably sufficient to examine a single one of these contradictions that pervades this book from beginning to end.

In defining his approach, Christ seeks to distance himself in the following manner from recent negative interpretations of Athenian democracy, such as that written by Loren J. Samons II: "It is not the intent of this study to debunk positive evaluations of the Athenian democracy, but rather to provide a realistic and plausible picture of the complex, and often tense, relationship between individual and state in democratic Athens" (3). This claim is clearly belied by numerous didactic paragraphs that state that, for instance, "[...] it is important to appreciate that self-interest permeated the entire citizen enterprise. Strategic considerations based on self-interests came into play regularly in the practice of Athenian citizenship. While this is conspicuously true of bad citizenship, it is also evident across the broad spectrum of citizen behaviour [...] While politicians in the Assembly and litigants in the courts appealed to truthfulness and forthrightness as essential to social harmony and civic welfare, they often did so shrewdly to advance their personal ends; and in their competition with one another outside the public eye, politicians and litigants did their best, as far as we can tell, to outsmart and outmaneuver their rivals" (35).

The "realistic and plausible picture" of Athenian society offered by Christ can only be described as depressing in the extreme. All but devoid of any motivations relating to the welfare of others, with altruism, solidarity, idealism, patriotism and communal spirit at an all-time low, Athenian life was, according to Christ, dominated by self-interest. He claims, in fact, successfully to have identified the ruthless pursuit of self-interest as the dominant characteristic of Athenian society. He makes no attempt, however, to compare this society with any other ancient or modern societies, with the result that we are left in the dark as to his terms of reference. If the Athenians were indeed conspicuous by their selfishness, are we to infer that those who have lived under the numerous non-democratic political systems (whether monarchic, tyrannical, despotic, absolutist, totalitarian or oligarchic) that spanned the roughly twenty centuries that separated the Athenian democracy from the first modern ones were conspicuous by their selflessness? Should we, the citizens of modern democracies, regard ourselves as equalling our Athenian counterparts in selfishness, or as outdoing our non-democratic predecessors in selflessness?

Unperturbed by such considerations, Christ blithely continues to heap upon the Athenian citizen labels that do not appear to be borne out by the evidence. The typical Athenian citizen was, apparently, not only self-seeking and self-interested, but cynical, unscrupulous, distrustful of others, wary and much given to posturing. Warning us that these characteristics are often disguised in the sources as idealism, Christ makes it clear that he for one is not to be taken in by such deceit: his mission is to unmask the true nature of the Athenian character. This he does by asserting repeatedly, in the form of unsupported platitudes, that self-interest was the be-all and end-all of public life: "Athenians were highly attuned to the tug of self-interest on the individual" (15); "Athenians regarded the pursuit of self-interest as a central feature of human nature" (16). He then proceeds to use these unsubstantiated claims as the basis for conclusions that are not supported by the sources.

A core methodological problem of this work is that the sources that Christ cites in support of his claims never appear, upon examination, to be saying quite what he thinks they are. A good case in point is Herodotus 5.78, where Athens' ascendancy to greatness is ascribed to the democratic equality and freedom of speech (isegorie, characterized as 'a good thing' by Herodotus) that became accepted after the downfall of the tyrants. In this passage, Christ argues, Herodotus is echoing "the claims of Athenian civic ideology concerning the role of self-interest in motivating democratic citizens" (27). Christ's interpretation, however, is refuted by Herodotus' antithesis. Under the oppression of despotic rule, according to Herodotus, the Athenians felt that they were working for a master. They made no better showing in war than any of their neighbours; they were, in fact, less heroic, behaving like cowards on the battlefield (ethelokakeon). Once freed of the tyrants, however, "each was zealous to succeed for his own self" (autos hekastos hauto proethumeeto katergazesthai).

Christ would have it that the phrase in inverted commas describes naked personal self-interest (defined in the Shorter Oxford Dictionary as "one's personal profit, benefit or advantage; regard to or pursuit of this, esp. to the exclusion of regard for others"). The truth is, however, that this phrase refers to an entirely different sentiment, and to one that requires concern for others: the fighting spirit inspired by patriotism.

Herodotus is saying that freedom from the hopelessness of perceived slavery had inspired the Athenians to regain the will to devote their every individual effort to the collective success of their country. He speaks of two virtues, that we today might call individualism and patriotism, which at Athens blended into a new motivational force. Had Herodotus meant that this new freedom had produced a sea-change in which every Athenian was inspired ruthlessly to advance his own ends at the expense of others, we could only presume two things: first, that under the tyrants the Athenian warriors acted with selfless heroism on the battlefield - which would be a little odd, since at this time they are clearly said to have played the coward and generally to have done rather badly in battle; second, the fact that they seem to have got so much better at fighting following the establishment of isegoria should be put down to their new determination to save their own skins at the cost of their comrades. On the surface of it, these implications appear to be absurd.

Athenian authors frequently voiced the idea that when the community fares well the individual flourishes. Aristotle put it succinctly: "the political organization (politike koinonia) was originally formed, and continues to be maintained, for the advantage of its members" (Ethica Nicomacheia 1160a4). The point that these authors were trying to make, however, was that individual and collective advantage went hand in hand, and that both were best secured by means of partnership (koinonia) rather than by means of individual selfish action. This is why Athens, whenever the good of the community stood in peril, required her citizens not only to forego self-interest, but ideally to perform acts of self-sacrifice. In 483/2 BC, for example, the Assembly voted to use the proceeds of the silver mines to build the ships that were later to win the battle of Salamis, rather than to distribute the revenues among the citizens. And during the plague, the majority of Athenians are said to have resisted the temptation, provoked by selfish behaviour, to neglect the sick and to have chosen instead to look after them at the risk of their own lives. "They felt ashamed to think of their own safety", comments Thucydides (2.51.5).

Let us now move on to Christ's 'bad citizen', described in his work as one who outdid even the 'good' Athenian citizen in selfishness: ''[...] it is reasonable to suspect, along with Athenians that bad citizenship was common" (3). His chief evidence for this 'reasonable suspicion' is the 'relative frequency' - again we are not told to what or to whom this frequency relates - with which draft evasion, cowardice on campaign and the evasion of financial obligations are mentioned in public discourse. Unfortunately, however, the frequency with which any phenomenon is mentioned in public discourse does not necessarily bear any relation to the frequency or scope of that phenomenon in real life (as is clear from the briefest scrutiny of any modern news medium).

The relative frequency with which bad citizenship figures in Athenian public discourse is indicative not of the prevalence of bad citizenship in everyday Athenian life, but rather of the intensity of the public pressure mounted to combat it. Since we so utterly lack any of the requisite quantitative evidence, to form any idea of the day-to-day problems posed by bad citizenship in classical Athens we must fall back upon indirect indices. One such index would be the system's overall performance; another would be the severity of the sanctions devised to suppress bad citizenship (on the assumption that the more severe the sanctions deemed necessary, the more widespread the phenomenon). In the first case, it is clear that the system as a whole functioned smoothly for almost two hundred years, giving rise to a cultural superstructure that most have regarded as remarkable in any time or place. In the second, it can be seen that Athens' formal sanctions to suppress bad citizenship were comparatively moderate. Christ himself avers that Athenians "tended to prefer [...] to foster good citizenship and discourage its opposite through public discourse rather than to force it through bureaucratic and legal mechanisms" (16). In most modern societies, by contrast, tax dodgers if caught go to jail, while most western countries court-martialled and executed draft-dodgers until early in the twentieth century. All this would tend to suggest that, contrary to Christ's contention, the 'bad citizen' posed little serious problem to Athenian democracy, while public opinion (and hence recorded concerns) stood strongly in favour of the common good.

Christ's work is impeccable in its meticulous bibliography, index of ancient citations and general index. Sadly, very little else can be said about this book by way of praise. Vitiated throughout by its erroneous premises, its argument is concluded amidst a shower of remarkably unenlightening commonplaces. Any fledgling historian might possibly have guessed, without consulting this book, that "Athenian democracy's ongoing engagement, institutional and ideological, with bad citizenship attests both to the challenges it posed and to the flexibility, and often ingenuity, of the democracy in responding to these" or that "[...]in this ancient democracy citizenship was not free of tensions and civic obligations were a subject of controversy and conflict" (209). If by 'study' we mean an intellectual enterprise aimed at discovering something that we did not know before, this book can hardly be said to merit the designation.