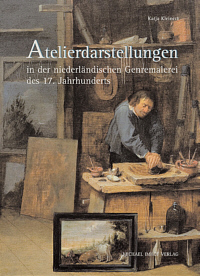 This book's title and subtitle ("realistisches Abbild oder glaubwürdiger Schein?") say a great deal about its contents, which were first presented as a doctoral dissertation (Freie Universität Berlin, 2003). To categorize Dutch pictures of artist's studios as "Genremalerei" is to answer the subtitle's question, at least for readers who are well versed in the literature of Dutch genre scenes (e.g., Wayne Franits: Dutch Seventeenth-Century Genre Painting. New Haven, London 2004). These pictures are always plausible fictions, with subjects and styles influenced by earlier and contemporary paintings, literary conventions, topical themes of society, and trends in the art market. One might expect, however, that a painter's representation of his - or rather, an artist's - workplace would come a little closer to home than, for example, a scene of fashionable courtship by Gerard ter Borch or Johannes Vermeer. And one would be mistaken: we might as well turn to Zola's novel, L'œuvre (1886), for a biography of Cézanne. The great appeal of Katja Kleinert's book is that she gives us the fictions and the facts at once, about a subgenre of Dutch art which is in many ways an ideal test case for the nature of Netherlandish genre painting as a whole.

The task is performed in a manner typical of German dissertations: the subject is divided into many parts and each one is described in exhaustive detail. Thus, in the chapter for which most art historians will be especially grateful, "Die Malerwerkstatt im 17. Jahrhundert - Versuch einer Rekonstruktion", we proceed through sections such as "Die Räumlichkeiten", "Die Einrichtung", and "Das Studienmaterial" and subsections such as "5.1.4. Heizung" (of the studio) and "5.4.4. Gliederpuppen". On a scale ranging from Goethe's essay, "Ruisdael als Dichter" (1816), to recent copies of the "Owner's Manual" from BMW Kleinert's text sometimes tips toward the latter, which, it must be admitted, makes it easy to locate the evidence for what actually existed in workshops (as in the valuable section, "5.4.3. Skulpturen und Gipsabgüsse") and also the author's summaries of what is seen in the pictures (seventy-six are illustrated and catalogued; some unfamiliar and quite intriguing examples are included). It might be thought that this approach would work better for the material evidence (found mainly in artists' inventories) than for artistic creations, but here the author's direct way with words maintains consistency. Speaking of the "spaansche stoelen" seen in some studio views, we are told that "in keiner Weise korrespondiert jedoch die Vielzahl und häufig auch kostbare Ausführung der abgebildeten Stühle mit den realen Gegebenheiten." (137) Many such declarations reveal little patience for the naive interpretations of the past.

And this is appropriate. Quite as recurring models in the work of Rembrandt were once identified as family members, so the "Verschmelzung von Selbstbildnis und Atelierdarstellung" (153) in eighteenth-century commentaries became in the next century an unquestioning dependence upon studio scenes as sources of historical information and as points of departure for artistic legends and yet more studio scenes (for example, Henri Leys's Burgomaster Six in Rembrandt's Studio, of 1853; see the print after the lost picture in Alison McQueen: The Rise of the Cult of Rembrandt: Reinventing an Old Master in Nineteenth-Century France, Amsterdam 2003, 140, fig. 17, which looks like an advertisement for a Parisian department store). This virus of credulity has not yet completely run its course and Kleinert warns us away from some of its recent carriers. For example, the authors of A Corpus of Rembrandt Paintings, vol. I (1982), accept the young painter's small panel in Boston, The Artist in his Studio, of about 1629, as a view of "Rembrandt's own workroom" in Leiden, which along with the enormous easel was "observed wholly or partly in a mirror." (211) Remarkably, the mirror produced a dramatic composition typical of the Early Baroque period.

Since about one-third of all Dutch studio views were painted in Leiden (Kleinert, 165) the same assumption of fidelity to actual sites would lead to the conclusion that extremely spacious and often romantically Medieval chambers were routinely rented or sold to painters in Leiden but rarely to artists who lived in other cities. This evidently compelled the Haarlem master Adriaen van Ostade to move to a peasant cottage in the country (see Kleinert, no. 54, the Dresden panel of 1663), where the main room was the size of a tennis court and featured a huge leaded glass window borrowed from a house in town. Vermeer was even more fortunate since, to judge from The Art of Painting (Kunsthistorisches Museum, Vienna; Kleinert, no. 76) and other pictures, his mother-in-law's old house in Delft (like the princely palace at nearby Rijswijk) had high ceilings and marble-tiled floors in almost every room, including (uniquely in the Netherlands) the one under the roof where the painter worked. However, the inventory of the entire household made shortly after Vermeer's death (see J. M. Montias: Vermeer and His Milieu. Princeton 1989, 339-44) paints a very different picture, which unlike those by the artist includes no tapestries, Turkish carpets, large maps, Chinese porcelain, silver-gilt vessels, or musical instruments of any kind. And no camera obscura. Kleinert could have made mincemeat out of Philip Steadman: Vermeer's Camera: Uncovering the truth behind the masterpieces (Oxford, 2001), had she considered that amateur study relevant to her own (see 92, 127 n. 1094, under sec. 5.6., "Optische und mechanische Hilfsmittel").

A slight drawback to Kleinert's approach is that the topic is so narrowly contemplated. Her comparisons with self-portraiture could have been extended much further, especially with regard to those examples that (like pictures of artists working in luxurious rooms) make claims for the social status of painters and for their superiority to sculptors and other artists (the paragone theme is nowhere discussed). This was an age when not only painters but also poets, art critics (such as Samuel van Hoogstraten), scholars and diarists revealed considerable self-consciousness (the "scholar portrait" provides an interesting parallel). Kleinert might have more closely explored the rise of connoisseurship in the Netherlands, which presumably was important for this quite specialized type of picture. Visits to artists' studios by Constantijn Huygens and Cosimo de' Medici are mentioned only in passing (147) and those by Pieter Teding van Berkhout and the much more important diarist Aernout van Buchell are not cited at all. However, it must be said that expanding the scope of Kleinert's study would only add color to the clear lines she has drawn. After reading too many academic tracts about the "self-fashioning" of Netherlandish artists it is refreshing to take Kleinert's straightforward tour of their studios and their vivid imaginations.