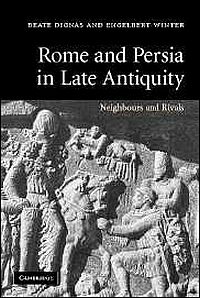 Dignas and Winter's work distinguishes itself from other source books, at least in this field, by its thematic treatment of the subject in hand. Already in 2001 they published a slightly slimmer version of this work, entitled Rom und das Perserreich. Zwei Weltmächte zwischen Konfrontation und Koexistenz (Bonn), which I reviewed for the Classical Review 54 (2004), 188-9. The present work adopts the same format but includes a few new sections and a considerably updated bibliography: there has been much work in the field in the six intervening years. It should be noted, however, that their bibliographic updating is patchy and fails to take into account several important works. A significant absence, for instance, is the massive volume of conference acts on Bisanzio e Persia (Rome, 2004), which contains a large number of very important relevant contributions. Other works, published in 2006, may have appeared too late to be taken into consideration, which is a pity, since there is much of value in (e.g.) F. Haarer, Anastasius I (Cambridge, 2006), J. Wiesehöfer and P. Huyse, eds, Eran ud Aneran (Stuttgart, 2006), and now H. Börm, Prokop und die Perser (Stuttgart, 2007). [1]

The first section of the work, some fifty pages, offers a narrative treatment of the whole Sasanian period, including a useful survey of the Parthian empire. The description of events is succinct and accurate, although the dating of Heraclius' campaigns (45-6) seems confused. This section, like the others, is accompanied by useful maps; later chapters also contain eighteen figures. This aspect of the work deserves commendation, since other source books often contain few illustrations. Many of the maps will look familiar to readers of other works published by Cambridge University Press, and on occasion they do not appear to have been well adapted to their new context: map 12 (189) clearly belongs to a rather earlier period, while map 10 (166-7), a useful depiction of the frontier region in Late Antiquity, inexplicably places Hira just 50 km south of Circesium. A few pages later (170) the Jafnid base at Jabiya is mentioned, yet it is not to be found on map 10.

The second part of the work, covering 200 pages, covers the ground thematically. Dignas and Winter firmly believe that the Sasanians laid claim to erstwhile Achaemenid territories, although this remains a fiercely contested point (56-8). A new section for this English edition has been inserted on Sasanian armament and tactics (63-9); one might note in this context the recent (popular) work of K. Farrokh on this subject, Shadows in the Desert (Oxford, 2007). The third chapter, the longest in the second part of the work, covers the wars waged by the two powers with one another; the fourth covers diplomatic negotiations between them. Thus one comes up against a problem I raised in my earlier review: certain events end up being covered several times in the book, first in the narrative overview, and then in both the warfare and the diplomacy chapters. This is probably inevitable in a thematic work, but it can lead to confusion and repetition. Nevertheless, the passages selected for translation are useful and, as one might expect from Winter's work in the field, the discussion of diplomatic issues is particularly good: ten pages, for instance, is devoted to the treaty of 562, making this a more detailed treatment by far than that offered by Greatrex and Lieu. The advantage, furthermore, of concentrating all the diplomatic dealing in one section is that one builds up a clear picture of the ever closer relations between the powers. One might note a few minor errors in passing, e.g. Bahram V campaigning against the Hephthalites (rather than the Kidarites, 98, cf. 193), the proposed adoption of Khusro by Justin dated to 522, not 525 (104), a non-existent advance by the Persians to Chalcedon in 610 (116, cf. Greatrex and Lieu, 186).

The remaining chapters are rather shorter. Chapter five concerns Arabia between the two powers; I continue to find it odd, as I pointed out in my earlier review, that no translation is offered of the much discussed Nemara inscription (168). Chapter six deals with issues of concern to both powers - Armenia, protection of the frontier, and economy and trade, this last being a welcome new section to this edition. The section on Armenia is a valuable survey of Roman and Persian contact with the region from the first century A.D., incorporating some useful extracts from Armenian sources along with a discussion of their problematic nature. As regards protection of the frontier, it remains doubtful, despite Winter and Dignas, whether the Romans ever did agree to pay the Persians regularly for the defence of the Caspian Gates (192-3); furthermore, the negotiations opened by Kavadh in late 530 (rather than spring 531 probably) were with Justinian, not Anastasius, and the Caucasian fortress in question was offered to Anastasius by King Ambazuces, not the Persians (194, cf. Procopius, Persian Wars, I.16.4, I.10.9).

Chapter seven considers religious matters, a key element in relations between the great powers. Rivalry between Zoroastrianism and Christianity undoubtedly played an important role in their dealings, although we must be wary of ascribing religious motives to wars or persecutions: Karin Mosig-Walburg has rightly expressed scepticism both regarding the historicity of Constantine's famous letter to Shapur II and as to whether Shapur's persecution of the Christians was motivated by religious reasons rather than pragmatic political ones. [2] As Dignas and Winter underline, however, Sasanian rulers generally grew more tolerant as time went on, a process that reached its culmination under Khusro II (227-30). [3] The work concludes with two brief chapters, one of which deals with the ruling dynasties of each empire: this is a new element in this edition and useful for its treatment of how the rulers of the two empires came to view one another as (more or less) equals. The last chapter considers the exchange of information between the two sides, covering matters such as deportations (more practised by the Sasanians than Romans), spying, and even Khusro I's interest in Greek philosophy. There follow a list of Sasanian kings and Roman emperors, a chronology of events, and a glossary (still somewhat eccentric in its coverage, as I noted in my earlier review). The indices are first-rate and greatly increase the utility of the book.

In conclusion, Winter and Dignas have offered the English reader an important new tool for understanding relations between Rome and Persia from the third century A.D. to the seventh. To its credit, the book incorporates a considerable number of excerpts from outside the Graeco-Roman corpus, including passages from (e.g.) Tabari, Agathangelos and the Testament of Ardashir, all translated by leading specialists. Dignas and Winter's translations, it should be noted, are accurate, if somewhat stilted, but on the other hand it is no mean feat for non-native English speakers to translate Greek and Latin sources into their second language; in the accompanying text, there are some mistakes of grammar and awkward phrases. These are minor matters, let it be said, although one might have thought Cambridge University Press capable of engaging someone to iron out such infelicities.

[1] See my review of Wiesehöfer and Huyse in Phoenix (forthcoming) and of Börm in the Bryn Mawr Classical Review (forthcoming). There are gaps among earlier works too, however, e.g. important articles by Michael Whitby on Dara and other fortresses of the eastern frontier.