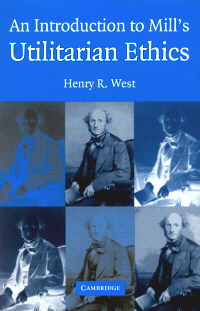 In the long essay Utilitarianism (1861), John Stuart Mill announces and offers a popular apology for his famous ethical manifesto: "The creed which accepts as the foundation of morals, Utility, or the Greatest Happiness Principle, holds that actions are right in proportion as they tend to promote happiness, wrong as they tend to produce the reverse of happiness. By happiness is intended pleasure, and the absence of pain; by unhappiness pain, and the privation of pleasure." Immediately controversial in its own time, Mill's work has lost little of its urgency today. It is continually anthologised, and taught in undergraduate courses. And utilitarian principles, which found their most persuasive spokesman in Mill, often remain implicit (as Henry R. West notes) in western governments' social policies.

West's book, a fruit of over thirty years' engagement with Mill, is primarily a critical exposition of Utilitarianism. An appendix offers a clear, analytical summary of Mill's essay, to assist first-time readers. West begins, however, with a brief account of Mill's life and philosophical relation to Jeremy Bentham and other predecessors. Further, he draws liberally on the Letters, System of Logic, and Mill's notes on his father's work on psychology. This is especially the case in chapter 2, which gathers Mill's scattered critiques of "intuitionist", i.e. non-utilitarian ethical theories.

The remaining four chapters approximately follow the structure of Utilitarianism. First, West addresses the key claim that some pleasures are qualitatively superior to others, by which Mill combated the prevalent disparagement of utilitarianism as "a doctrine worthy only of swine" (S. T. Coleridge, for instance, had referred pointedly to "Epicurus's sty" in his 1819 Lectures on the History of Philosophy). While rejecting the asceticism implicit in Mill's rigid distinction between human and animal pleasures, West nevertheless supports the contention that we experience different kinds of pleasurable sensation in response to different stimuli. For West, Mill's analysis thus enables more nuanced criteria for pleasure evaluation than those of mere intensity and duration.

West then enquires whether Mill was an "act utilitarian", judging actions case-by-case, like Bentham; or a "rule utilitarian", basing such judgements either on generalisation or on a moral code. Drawing on the work of David Lyons and L. W. Sumner, West explains that Mill's theory combines both versions of utilitarianism, while adding yet a third ingredient: a doctrine of rights. West's interpretation thus differs sharply from that of the main competitor on the market, Roger Crisp's Routledge Philosophy Guidebook to Mill on Utilitarianism (1997). Crisp presents Mill - less plausibly - as an extreme kind of act utilitarian concerned only with the consequences of particular acts, not with the general tendencies of acts of a certain type.

A central question in Utilitarianism is: what motives do we have to behave morally, what "sanctions", to use Mill's term, may deter selfishness? West explores Mill's distinction between internal and external (legal and social) sanctions. Although he demands improvements in education and social reform, Mill's main interest in this essay is in the internal sanction provided by conscience, which he treats as an acquired rather than an innate mechanism. Further, according to West, he maintains a form of Benthamite "psychological hedonism", whereby no other motivation for action exists apart from pleasure. Mill's account is subtler than Bentham's, however, in that he acknowledges the role of habit, whereby we continue to act without direct reference to the pleasure that initially induced the particular habit. As West approvingly summarises: "All motivation is ultimately from pleasure and pain, but through the process of association and habit formation, pleasure is not always the conscious object of desire and not all motives are the anticipation of pleasure or pain" (129).

In West's interpretation, this modified psychological hedonism informs the most controversial of Mill's arguments: how to "prove" the principle of utility. Many critics have castigated Mill's "proof" for betraying his own declaration that all first principles are "incapable of proof by reasoning". West, however, painstakingly reconstructs the logical steps in Mill's argument, and defends the plausibility of Mill's proposed proof: that by introspection we can discover that what we desire in desiring virtue or any other good ultimately resolves itself into one end - happiness.

Finally, West tackles Mill's most complicated chapter (originally conceived as a separate essay), "On the Connection Between Justice and Utility". Mill notes that the idea of justice is intuitively both so powerful and apparently unified that it seems to present itself as an alternative to utility. However, people in fact invoke justice to support totally different ethical propositions: that criminals should be punished harshly, or that they should not be punished at all, for instance. Our entirely proper respect for the idea of justice, according to Mill, originates not from its sovereign status, but in the utility of just laws that protect our security. West discovers some surprising affinities between Mill's account and that of John Rawls's monumental Theory of Justice (1971), arguing that Rawls justifies his first principle - "equality in the assignment of basic rights and duties" - on empirical grounds that could well be labelled utilitarian, despite Rawls's explicit rejection of that term.

Students of Utilitarianism will still wish to consult Wendy Donner's essay in The Cambridge Companion to Mill (ed. John Skorupski, 1998), Colin Heydt's Rethinking Mill's Ethics: Character and Aesthetic Education (2006), and John Skorupski's Why Read Mill Today? (2006). German readers now have a translation of the text by Manfred Kühn, also published in the bicentenary year of Mill's birth (2006), and for them the detailed commentary by Jean Claude Wolf, John Stuart Mill's "Utilitarismus" (1992) remains indispensable. Wolf is much more thorough than West, for example, on Mill's discovery of Kantian ethics through his reading of Coleridge; a topic whose importance is underlined by Nicholas Capaldi's authoritative analysis of Mill's Romantic inheritance (in John Stuart Mill: A Biography, 2004).

However, West's work is admirably clear and well-documented, and its careful but committed defence of the coherence of Mill's utilitarianism make it not only a friendly companion for new readers of Mill, but also a noteworthy intervention in the continuing debate about the feasibility of utilitarian ethics today.