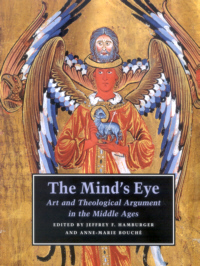 Representing perspectives from the history of art, science, literature and culture, the magnificent volume edited by Jeffrey Hamburger and Anne-Marie Bouché, The Mind's Eye: Art and Theological Argument in the Middle Ages, presents something like a totalizing account of medieval visual theory. Staking its claim to a prominent place in the history of ideas, the collection strives to shake off, once and for all, the liabilities of a discourse that once considered the visual only supplementary to the verbal domain of representation. Contributions from major figures in intellectual history such as Karl Morrison, Bernard McGinn, Mary Carruthers, Caroline Walker Bynum, Barbara Newman and Jean-Claude Schmitt lend the overall project - based on papers presented at the Index for Christian Art in Princeton - a broad and promising interdisciplinary tenor; but one wonders if, in the end, the word does not still reign supreme.

The program envisioned by the organizers of The Mind's Eye is neatly captured by Herbert Kessler in the concluding essay. Kessler spotlights what he calls a key "principle of interpretation," one that holds that "medieval pictures not only represented religious figures and themes but also instigated dynamic progressions that, themselves, generated theological content" (414). Working toward their own version of this model, the best essays here succeed also in expanding it. Admirable in both regards is Bouché's investigation into those elements in Romanesque programs that confounded beholders' expectations; pictorial anomaly, she proposes, in concert with "enigma" and "paradox," functioned in medieval art "as a mechanism for engaging and guiding viewers as they explore the deepest recesses of [...] dense iconographic programs" (306). Unwilling to overlook the discordant, Bouché's model analysis shows how tropes of the anomalous, the ridiculous, the absurd or the grotesque could figure forth Christian theology's highest truths. Likewise ambitious in realizing and expanding the model is Thomas Lentes's prolegomenon to a theory of the gaze in, and as a form of, ritual. Lentes rejects the "automatism of salvation" implied in the "magical conception of sight," a paradigm he finds embedded in the concept of heilbringende Schau (awkwardly translated here as "salvatory gaze") developed by Anton Mayer in 1938. What are needed instead, argues Lentes, are "differentiated" approaches to the problems posed by gazing and sight, approaches that take into account the "networking of staging strategies, visual practice and religious experience" (363) in which devotional images can and should be situated. Though he somehow failed to notice the presence of several such approaches in this very volume, Lentes is right to demand greater attention be paid to the routines of bodily comportment and the physical mobilization of the gaze (by fascinating contrast, in Carruthers's account of medieval rhetoric the mobilization of the image is entirely virtual, part of a meditative "exercise for making thoughts about God" - 292).

Another crucial insight arising from Lentes's work is that the efficacy of the devotional gaze could be both dependent upon, and constitutive of, the spiritual state of the individual. Ritual gazing, in this penitential model, becomes a kind of disciplinary practice, a process of training the "inner person [...] by means of his eye and the manner in which he gazed" (362). We need not follow Lentes all the way to his conclusion - that the ritual emplotment of gaze and image reduplicates the structure of eucharistic communion - in order to appreciate how it can take us inside the recursive logic of many kinds of devotional images, especially those that feature surrogates within the scene of devotion enacting an idealized visuality for those outside it. Exemplifying this recursivity in later medieval art is the Mass of St. Gregory image, shrewdly reconsidered in Caroline Walker Bynum's far-ranging essay. Skeptical that the image could ever serve as a primer in the doctrine of transubstantiation, let alone an "illustration" of it, Bynum sees the theme condensing - but also unfolding - a complex encounter with the unseen, specifically the "unseeable substance" of Christ's body hidden behind the "accidents" of bread and wine. As a visual theophany the image is powerful because it defeats efforts to encompass it within a closed formula, pushing back upon the beholder the question of how the suffering Savior may be present upon the altar. Peopled with figures who intuit but do not yet "see" what visionary experience, ushered onstage by the artist, has disclosed, the image thematizes the potential we hold within ourselves to see through accidents to the ineffable substance beyond.

Other essays in the volume inquire into the ways medieval images encode experiential "progressions" within their very structure. Hamburger provides the most compelling example through his analysis of manuscript images depicting the Ark of the Covenant. Drenched in a "rhetoric of revelation," these theologically dense images, with their rotating perspectives and angelic interlocutors, become, under Hamburger's exegetical scrutiny, models for vision itself. They also bear eloquent testimony to the medieval image-maker's understanding that the limits of representation could themselves become the subject of religious imagery. Provocatively, Hamburger frames his analysis with a question drawn from modernist aesthetics - whether the work in the phrase "medieval work of art" might not consist precisely in art's self-conscious self-substitution for what cannot be seen. Medievalists eager to welcome the concept of art back from its exile under the reign of the image will thank Hamburger for raising the point, though here the problem buckles under the polemical weight (an argument with David Freedberg's Power of Images) it is asked to bear. Barbara Newman's lively discussion of the "sacred eroticism" behind the motif of love's arrow and its corollary tradition, Christ depicted as Cupid and as the dieu d'Amors, likewise seeks to discover something like a master trope for the image itself. The difference here is that devotional experiences instigated by the sacred image did not always transpire as some mystical writers would have preferred - that is, "gradually," in stages. Rather, as Newman's analysis reveals, the heart's penetration by the thing seen, via the eye, could be instantaneous - and electrifying.

In addition to those contributions that orbit close to the book's center of gravity, there are others that stray from it, such as Alfred Acres's inventive attempt to describe a different kind of invisibility trope - allusions to demonic presences he calls "hauntings" - operating inside late medieval narrative art. Others are straightforward contributions to medieval image theory (Morrison's essay on the Libri Carolini) or optical theory (Katherine Tachau's brilliant piece on "seeing as action" in the science of perspectiva), with only modest gestures toward the objective materials of art history. Still others openly - and usefully - challenge the very premise of the book. Andreas Speer's chapter combines polemic with a summary of his work on Suger's architectural program at St. Denis. Modern scholars, he contends, are caught up in a methodological circle of their own devising, in thrall to the Hegelian assumption that medieval builders and iconographic planners strove to realize the ideals set by speculative theology; the renovatio Speer recommends for medieval studies would introduce "a plurality of modes [by] which [to] relate theology and images."

In some respects The Mind's Eye is a book that already answers Speers's challenge; in others it reproduces the very tendencies he targets. Like any self-consciously important work of synthesis, the volume could be characterized equally well as a touchstone for future research, or the capstone in a completed edifice. It is significant that most of the essays represent summaries of a larger project or culminates the work of a distinguished career; taken together they gleam with the high polish of the definitive. Perhaps for this reason we should be glad that The Mind's Eye also has its blind spots. One of these is the virtual absence of sculpture from the scenes of analysis (Bouché's essay is the exception), and little consideration of the cult image and its special problems (one detects a silent assault on Belting's theory of the image). Other blind spots are the reluctance to introduce gender as a differentiating factor in reception and a near-phobic avoidance of the diverse political and social groundings of theology and image-making. Indeed, for a project so determined not to reify theology or dehistoricize its practice - replacing it with the heuristic term theological argument - there is a curious lack of engagement with the era's galvanizing theological debates, from the controversies over Real Presence or the Immaculate Conception to the many combats with Jews, heretics, and other religious non-conformists, each of which had a corollary in the visual arts. Systematic theology's self-regard as the most exalted of intellectual endeavors finds continuing life in a discourse that maps the interplay of perception, cognition, memory and imagination far above the messy "contexts" of medieval society and its emergent public sphere.

Underlying the diversity of perspectives and subjects treated in The Mind's Eye, then, one finds a near-consensus about what is important for understanding the nature and dynamic of medieval visuality, and what is not. Are we in the presence of a new orthodoxy? Judgments about the book's importance will no doubt abound, and there is indeed a great collective achievement to celebrate here. But only time will tell if the grandeur of the completed edifice will inspire the investigatio necessary for an expanding discourse, or a revelatio that begets only mute worship.