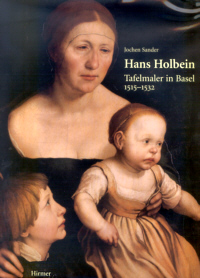 More than any other German artist of the sixteenth century besides Albrecht Dürer, Hans Holbein the Younger (1497/98-1543) has been the subject of recent attention in articles, books, symposia, and exhibitions. This reinvigorated interest was spurred a decade ago by the anticipation of the five hundred year anniversary of the artist's birth. [1]

Jochen Sander's impressive book comes during a second important wave of scholarly studies that have had the benefit of absorbing the contributions and conclusions of those clustered more closely around 1997-98. The result is a thoughtful and critical reassessment of earlier interpretations, presented with an authoritative voice and integrated with new information from scientific examination of 37 of Holbein's major paintings in Basel, Darmstadt, Freiburg im Breisgau, Karlsruhe, and Solothurn.

Scholars have tended to divide Holbein's career according to the different cities and/or media in which he operated, and Jochen Sander is no exception to this approach. [2] He delimits his focus to paintings made during the period in Basel, following the artist's initial training in Augsburg and preceding his second stay in England, where he would die a court painter to Henry VIII.

The author almost dares his art historian-readers to hone their skills at seeing what the paintings reveal of themselves, both on the surface and beneath: the paintings show "in welchem Umfang bereits die unbefangene Betrachtung der Gemälde zu unerwarteten Ergebnissen führen kann" (43). What becomes clear is that there has been a remarkable deficit of solid research on and close looking at paintings Holbein made during this productive time of his life. As Jochen Sander points out, it is not until 1997 that the first technical study of the Oberried Altarpiece was done, and photographs of the verso of the Passion wings were published only in 1998 (10)!

The book is divided into three sections of unequal length, followed by a rich appendix with color reproductions, and a reference catalogue, which includes detailed information about the materials, provenance, restoration history, and literature for each work discussed.

Beginning with a useful assemblage of the limited documentary traces of Holbein during his lifetime, Jochen Sander sets the tone for a book that is precisely about the need to assess the evidence, the task of distinguishing the historical and visual records from mythic accretions and scholarly biases.

In "'Holbein-Bilder'. Entstehung und Kritik," the second part of the book, Jochen Sander establishes the critical framework of his approach in several short essays. He not only introduces the reader to important contextual information - Basilius Amerbach's entries on Holbein paintings in his inventory of 1585/87; the professional relationship between the artist and his father and brother; other painters like Hans Herbst (another 'HH') working contemporaneously in Basel - but also raises three larger problems that direct his attention throughout the book. These problems are of dating and attribution, the 'Italian question,' and explaining Holbein's stylistic pluralism.

"Holbeins Gemälde. Der Künstler als Tafelmaler in Basel, 1515-32" comprises the bulk of the book. Jochen Sander proceeds roughly chronologically and treats the major paintings in great depth, one at a time. The strength of his argument lies in the fact that he thoroughly evaluates what others have said before, weighed against his own expertise, archival finds, and interpretation of new technical studies. Sometimes he sides with the most recent voices - as with Daniel Hess's late dating of the Oberried Altarpiece to after 1525/26 (194-204) [3]; sometimes he revives older theories, such as that proposed by Eduard Plüss, that Holbein's Family Portrait was originally a diptych, now missing the artist's self-portrait (326-27). [4]

Central to Jochen Sander's position through the entire book is his justified criticism of the primacy scholars have given to the influence of Italian art on Holbein's work. Himself an expert in Netherlandish art, the author seems to see a Netherlandish or Franco-Flemish influence wherever he looks. At times Jochen Sander overstates his case, as with his attempts to link the Oberried Altarpiece to Hugo van der Goes' Montforte Altarpiece and woodcut designs from the so-called 1520's Workshop (194-204). Other times his assertions of Netherlandish influence are less fraught, as with the Solothurn Madonna, an Italian sacra conversazione and Van Eyckian tribute in its delicate paint handling and attention to surface detail (148-66).

Jochen Sander does argue for the artist's direct knowledge of Italian art, although placing the defining moment not in any presumed trip to Italy, but rather in a trip to France in 1523/24. The key figure for Holbein at the French court is not Leonardo, but a follower, Andrea Solario, whose Salome resonates strongly with Holbein's Laïs Corinthiaca. (Here Jochen Sander would do well to cite the young artist's exposure to Italian art in Augsburg, not only in the form of engravings and plaquettes, but also in the Fugger collection, for example, which had at least one portrait by Giovanni Bellini. Venetian apprentices are also documented in the workshop of Hans Burgkmair.) [5]

Diminishing the import of Holbein's possible travel to northern Italy, Jochen Sander most controversially designates the imitation of Leonardo's sfumato to a clever workshop assistant, whom he calls the Venus Painter, after the painting Venus and Amor (which, until this study, had been thought to be by Holbein and precede the Laïs Corinthiaca). Without explaining this newly identified artist's familiarity with sfumato, Jochen Sander reattributes other Holbein works to him, as well, including the Last Supper. These new attributions are based on the Venus Painter's demonstrated access to Holbein's cartoon drawings, "sklavisch" (240) following of underdrawings, qualitative differences in color, and characteristics like "gummiartig" hands (239).

Jochen Sander's bold reduction of Holbein's œuvre and identification of the Venus Painter were intended to provide a clearer view of Holbein's distinctive style, but it is bound to generate controversy. The example raises an important caution about the use of technological analysis. While infrared reflectography does not lie in revealing underdrawings, we are reminded that, like all scientific study, such images must be read and interpreted, and may lead different experts to different conclusions. Jochen Sander's insightful observation that the Venus and Amor painting relies on the same missing cartoon used for the Laïs, and yet lacks additional modifications one would expect of Holbein, may not lead another scholar to conclude that this is necessarily the hand of another artist; or, if that of an artist from the Holbein workshop, another scholar might choose not to elevate him as a separate hand with his own œuvre, seeing it instead as a variation of standard workshop practices bearing Holbein's stamp. The fact that the underdrawing of the Last Supper almost certainly was prepared by a left-hander (i.e., Holbein) only further complicates Jochen Sander's argument for its distinct attribution and decision to give the Venus Painter his own name.

In addition to targeting an audience of Holbein specialists, Jochen Sander's book should appeal to early modern art historians working on artists on both sides of the Alps for its broader implications as a model for future studies. He succeeds in raising awareness of historiographic biases (e.g., toward Italy; toward generous attributions) and the ease of perpetuating artistic myths at the expense of close looking at the archival record and material aspects of the works themselves. He also suggests important questions central to the task of the art historian. What circumstances go into the shaping of an artist's accepted œuvre? What is the relationship between drawing, underdrawing, and painting? What is the meaning of style - is it individual, national, regional, or a flexible language that reflects patron expectations or that of a certain medium? Is it possible to get a full picture of Holbein and his workshop practices by looking at his paintings only? What does it mean to be an 'international' artist in the early sixteenth century?

Even if Jochen Sander's conclusions regarding, for example, his identification of the Venus Painter and the proposed missing self-representation in the artist's Family Portrait, meet resistance, his reproductions of the infrared photographs and final catalogue section will guarantee the book's usefulness for many years to come. No doubt Jochen Sander has succeeded with this book in setting the discourse for future Holbein studies.

[1] Erika Michael's Hans Holbein the Younger. A Guide to Research (New York: Garland Press, 1997) came out in time to include only some of these important publications corresponding to Holbein's anniversary year.

[2] Illustrative of a topographical approach are the coordinated dual exhibitions of 2006 in Basel and London, as well as the nearly simultaneous appearance of Jochen Sander's book on the Basel years and Susan Foister's on the English aspects of his career. Susan Foister: Holbein and England, New Haven 2004. With Jochen Sander attending to the painted work and processes, Holbein's important graphic work - book illustrations, title page designs - as well as designs for decorative arts, stained glass, and monumental fa çade paintings are left as topics more thoughtfully addressed in the 2006 Basel exhibition catalogue, to which Jochen Sander contributed as one voice among many. Christian Müller (ed.): Hans Holbein the Younger: the Basel Years, 1515-1532, Munich / New York 2006.