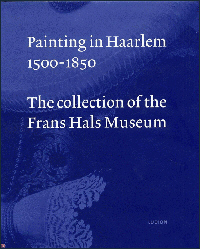 Summary catalogues, lists of works and highlights of the collection of the Frans Hals Museum have been the only publications describing the museum's holdings until now. The new catalogue - which is much more than just a catalogue - Painting in Haarlem, 1500-1850. The Collection of the Frans Hals Museum - has been decades in the making, but worth the wait. It is an overwhelmingly informative enterprise, produced with information from several generations of curators and archivists and finally concluded under the guidance of Neeltje Köhler with 13 authors. It is not without some problems or curious decisions, but these are mere quibbles when compared to the wealth of information that is offered.

The focus of the book is, as is the focus of the collection, on works of the sixteenth and seventeenth centuries. This very hefty volume is organized in four main sections: essays; biographies (the largest and most impressive section); the catalogue; and lists (concordances, etc.), followed by bibliography and indices.

It is expected that a catalogue will be introduced by the history of the collection and two of the four essays do this, explaining the beginnings of the museum and the "core of the collection" by Neeltje Köhler, Koos Levy-van Halm and Epco Runia. The unique collection of the Frans Hals Museum, from both the type of painting, patronage, and its natural focus on Haarlem artists, is explored and explained. "The core of the Frans Hals Museum's collection of paintings comes from churches and monasteries, government buildings, civic guard halls and charitable institutions." (54) Perhaps most known for Frans Hals's civic guard portraits, those are only a fraction of the group portraits owned by the museum. There are 18 civic guard paintings (including works by Cornelis van Haarlem and Frans de Grebber) and another 14 portraits of the boards of regents of hospitals and almshouses. These include works by Johannes Verspronck, Jan de Bray and, of course, Frans Hals's own 1664 portraits of the male and female regents of the Old Men's Home - later to become the Frans Hals Museum.

The other two essays, "The Haarlem School" by Pieter van Thiel and "Haarlem Studio Practices" by Ella Hendriks, are unexpected yet welcome additions here and bring the book to a level beyond the usual catalogue. I know of few collection catalogues where a "School" essay would be logical, but in fact here we would have said "it was a missed opportunity" if it were not included. The collection of the Frans Hals Museum indeed speaks to the very question of "School." The seventeenth-century chronicles from Karel van Mander, Samuel Ampzing and Theodore Schrevel lauded the significance of these Haarlem artists - most notably Hendrick Goltzius and Cornelis van Haarlem - and also the earlier Haarlemmers Geertgen tot Sint Jans and the pivotal Maerten van Heemskerck. The importance of history painting and portraiture is noted by Van Thiel while also including a history of genre, landscape, marine, architectural and still-life painting in Haarlem. He masterfully weaves together the painters and their relationships. A small correction: Judith Leyster and Jan Miense Molenaer were married in 1636, not 1633; this is reported correctly, however, in the biographical section. In this essay, as in ones on the collection's history, one is reminded of the impact of the Iconoclasm on the paintings, their placement, the city's holdings, and the role of the Prinsenhof as a functioning art gallery by 1630.

The final essay on Haarlem studio practice is based primarily on technical studies as a result of preparation for the exhibitions on Frans Hals (1989) and Judith Leyster (1993), as well as work on individual sixteenth-century paintings. An in-depth discussion of panel supports, canvas, grounds (their thickness and color - usually white, but frequently pinkish) and use of underdrawing is the body of the essay. The move to canvas seems to have allowed for even larger and more impressive group portraits. There is a discussion of the impact of grounds on the luminous quality of Frans Hals's civic guard paintings, as well as a brief mention of Haarlem practice in comparison to works of other cities. Occasionally, however, the vocabulary is too technically intricate and complex for all but other restorers. However, the charts that accompany the chapter (86-93) on a sample of paintings (about 30 of canvas supports and nearly 100 on ground colors) make this information more accessible.

The essays set the stage for the true major original contributions of this book - the biographies. The "Biographies, 15th - 17th Century" (over 250 pages in itself) by Irene van Thiel-Stroman, and the much slimmer "Biographies, 18th - 19th Century" by Bert Sliggers, do not cull material from catalogues or monographs, as is usual, but from the Haarlem archives. There is much original and previously unpublished material here. This is a truly amazing new resource for any future work on Haarlem artists.

And here it needs to be clarified - and this is also mentioned in the book's Preface - the biographies are not of every artist in the collection, but only of Haarlem artists (artists who were born/died and worked in the city) whose work is in the collection. Indeed, it is here, and in the catalogue that follows, that we better understand the two-part title of the book: Painting in Haarlem and Collection of the Frans Hals Museum. The catalogue follows the biographical essay; that is, the biographies are not integrated into catalogue entries, but are included as a separate section.

Lengthy discussion of works are available for 200 paintings - of the over 600 - in the collection. The others are listed with simple provenance or literature or sometimes less. All works are illustrated with only small, black and white illustrations, integrated into the text. As these photographs have neither captions nor numbers, sometimes on pages where there are several, it takes a moment to match the appropriate photograph to the entry. But many of the images will be a surprise even to those who think they know the collection well, as so many paintings - both large and small - are not usually on display. Many of the full entries are complete indeed - with the men in most of the civic guard paintings fully identified. (A small note - Frans de Grebber's 1619 civic guard portrait was also exhibited at Rutgers, 1983). Of special mention, too, are the exhaustive entries for the magnificent paintings in the Frans Hals Museum by Goltzius and Cornelis van Haarlem.

The lists that follow are of various concordances, including a list of some 70 changes in attribution (703-04). Most notably, the portrait of Jacobus Hendricksz Zaffius formerly attributed to Frans Hals has been demoted to a contemporary copy made about 1611. The lists however, highlight some questionable decisions. The works on the "List of lost and stolen paintings" (711) are seven paintings with four indicated as missing, and three "stolen, 22 March 2002." Yet none of these seven are afforded catalogue entries, and no illustrations are provided. On the list is the Frans Hals Museum's only work by Cornelis Bega; there is neither an entry, nor a photograph, but there is a biography of the artist. The table of contents also indicates a "Straw Painting" (679) for which there is one entry, a panel by Hendrick Pronck (Haarlem?-Amsterdam 1693), without explanation as to what a straw painting is (I admit I don't know). Nor is there a biography of that artist, so despite drawing our attention to it, we are not rewarded for our curiosity.

Further, one cannot say the paintings of the eighteenth and nineteenth centuries are ignored, but they are clearly not the focus of this volume or of the collection (indeed most of these works are not on view at the museum, and arrangements suggest that this will be the case for at least the next 10 years). Few of these artists of the eighteenth or nineteenth centuries have works among the 200 for analysis. It does raise the question if the catalogue should have in fact been restricted to the earlier artists only.

But these above comments are the quibbles I spoke of earlier. They matter little compared to the magnificence of the work. Painting in Haarlem will be an essential tool for historians of Dutch art.