Robert Beachy: The Soul of Commerce 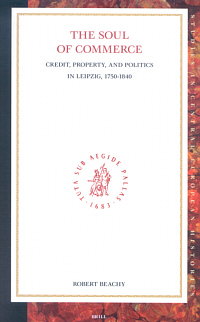 Highlighting the intersection of urban politics, reform activism among propertied burghers, and the long-term financial consequences of war and military occupation, Robert Beachy's rich study of finance and local governance in Leipzig successfully bridges the early modern and modern divide. He makes a strong argument that early modern political culture shaped and legitimated burgher reform in the nineteenth century understood as distinctly "modern" civic culture. The prism through which he traces the discourse of legitimate and responsible governance between 1750 and 1840 is municipal finance, in particular, debt, fiscal reform, and property taxes. He provides, therefore, nuanced and fresh insights into burgher activism and local politics that challenges the notion of the Revolutionary and Napoleonic era as one of complete rupture.

Although social and political studies of Saxony have enjoyed a rise in popularity in the last decade, most of these works in English focus on the second half of the nineteenth century or the volatile twentieth century. [1] Beachy's work spans the decades between 1750 and 1840 and features the fate of Leipzig during an era that Saxon historians have typically viewed as one of crisis and international decline following the Seven Years War. He presents the Napoleonic period as one of fiscal exploitation, and after 1810 as an era of hardship for Leipzig, complicating the traditional view of Saxony as free from negative Imperial influence as Bonaparte's ally. Most important, Beachy challenges the traditional view that Saxony remained politically undeveloped or inert during these crucial decades. His work clearly engages a number of historiographic issues including the most prominent, the viability of pre-modern communal and civic traditions to influence nineteenth-century urban reform. [2] In fact, his presentation of the centrality of property ownership to claims for political accountability and representation in Leipzig connects his work to a broad historical discourse that expands beyond German borders. Finally, the long term fiscal damage wrought by war and military occupation - during the Seven Years War through the Napoleonic Empire - to Leipzig's government provides new insights on the very fragile relationship between war and society in eighteenth and early nineteenth-century Europe.

Beachy commences his study with an overview of Leipzig's commercial elites, corporate bodies (in particular the university), and the social and economic role of the Leipzig Council. He argues the collaboration between merchants and jurists provided the city with legal and commercial elites that combined to ensure the city's civic independence and provide mercantile credit. The city's 1689 constitution along with later mercantile associations and commercial codes generated political privileges for the city from Dresden and strengthened Leipzig's entrepôt status within Europe generally. Indeed, Beachy reveals a contested relationship between the Leipzig Council and the Saxon government in Dresden to add new insights into the workings of the Saxon state. Despite a thriving economy and limited independence from Dresden, civic life was not harmonious. In an overview of sumptuary law, Beachy details the fault lines it generated between merchants interested in trade and consumption and the elites in the Leipzig Council concerned with maintaining traditional social distinctions in a time of commercial expansion as well as the preservation of its traditional authority.

The Prussian occupation of Leipzig during the Seven Years War and its long-term fiscal consequences figure prominently in the following chapter. Beachy delves deeply into the politics and economy of military occupation and exploitation, describing physical and economic destruction, billeting demands, impressing soldiers, and hostage-taking to coerce cash contributions by Leipzig as well as other cities. Although Leipzig's population shrank by more than 10% between 1757 and 1763, Beachy highlights the city's financial contributions to the war and estimated that it paid one third of the Electorate's tribute. Wartime finances were complicated and entailed a combination of municipal corporate borrowing from outside lenders and loans from individual Leipzig merchants. Beachy illustrates that 6% of the financial contributors, largely drawn from mercantile elites within the Leipzig Council, shouldered 80% of the financial debt from the Prussian wars. He also adds such financial sacrifice among the ruling elites reinforced "the legitimacy of the Council's oligarchic authority (86)." Beaching concludes this chapter with a discussion of Saxon fiscal reform, the Rétablissement, and argues that above all, it represented a limit on royal spending and the re-establishment of Saxon estates, further enhancing the status of the Leipzig Council.

Beachy returns to the problem of war tribute and public debt with the French occupation of Saxony. Despite its elevation to kingdom and close alliance with Napoleon, Saxony faced military occupation and its associated costs as well as 25 million franc war indemnity. Moreover, the Council paid large contributions to the French to prevent confiscation of Leipzig's mercantile property in 1806 following the Continental System. Confiscation threatened the entire Saxon economy and Leipzig's renowned trade fairs in particular. Beachy describes the construction of a municipal bond to meet French needs. Financial planners focused on property, rent, consumption, and mercantile taxes to underwrite the bond, instead of taxing merchant capital or the wealthiest inhabitants as in decades earlier. The long-term consequence of this move was significant as it united merchants, artisans, and property owners to mobilize and demand fiscal and political reforms. Debt management emerged as a fundamental civic problem after 1815 when Leipzig's property-owning residents demanded financial transparency and responsibility from their civic leaders. Beachy views the role of the 1817 Burgher Committee as an early reform movement that challenged and revised the Council's fiscal and debt management policies. He concludes that public debt and taxation motivated post-war burgher activism that became as political as it was fiscal.

Beachy also highlights the city's Enlightenment sociability and public discourse, in particular a print culture of critique. Along with municipal governance and fiscal administration, Beachy explores enlightened discourse as a possible source of burgher activism. Although his chapter on urban Enlightenment is very interesting in its scope, it does not convincingly demonstrate that enlightened critiques in Leipzig undermined the legitimacy and authority of local elites. Rather his overview of the Leipzig Enlightenment reinforces Beachy's primary argument that in a city known for its trade fairs, wholesale commerce, and financial services, the practice of sound fiscal management and transparent governance mattered more than "scathing remarks" directed against the city's elite families and their alleged debauchery. His concluding chapters reinforce this view of Leipzig associational life as more social than political.

Beachy concludes his book with the Leipzig "Unrest" of 1830 and treats it as a consequence of abuses in the municipal tax system related to the public debt. He views the decades leading to 1830 as a "remarkable political innovation (219)" War debt and the municipal bond altered the traditional relationships of such corporatist bodies as the University and Leipzig Council to the city as it frustrated residents fed up with artificial housing expenses. These residents demanded administrative transparency and eventually political participation in municipal governance. The political impulse for reform stemmed not from the city's rich associational culture, but from intense pressure created by public dept management. Thus, Beachy argues that Leipzig served as a "practical laboratory for Saxon constitutionalism (221)."

Beachy's work, persuasively argued, is based on strong archival evidence and presents new insights into the sources of burgher activism. If warfare is not the central subject of his book, war clearly generated a range of consequences - here in the form of tribute and long-term debt - that challenged the traditional status quo. More studies on this war and post-war period are required to view Leipzig in a comparative framework. Research on the fiscal structures and economic restoration in Hamburg, Frankfurt, and other cities economically drained by French and Napoleonic expansion demonstrate the long shadow of the war in fiscal politics. Beachy's case study on Leipzig's war debt and burgher activism represents solid scholarship and offers readers new ways to view notions of "modern" political and economic reform between 1750 and 1840.