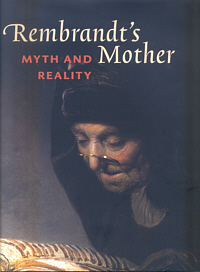 I. The Rembrandt year of 2006 occasioned an international avalanche of commemorative events for the 400th anniversary of the artist's birth. Leiden - location of Rembrandt's birthplace and first workshop - participated in the celebration by designing a show devoted to the many depictions of Rembrandt's mother, an inherently seductive subject - everybody, after all, has one. Thus was born "Rembrandt's Mother: Myth and Reality" at the Stedelijk Museum De Lakenhal.

The show's attraction pulls on two strings - the primal tug the Mother exerts on us all and the related nineteenth-century romantic quest to locate the artist's originary moment, the mother his originary vessel. Nineteenth-century assumptions pervade the catalogue, a deeply unmodern project whose fragile utility is apparent even to its organizers. If each generation creates its own Rembrandt, we presently occupy a particularly unstable moment in the history of Rembrandt studies which are in considerable flux, due in part to the continuing reevaluations of the corpus by the Rembrandt Research Project. The Leiden exhibition demonstrates, unintentionally perhaps, the tension between the enduring gravitational pull of the past against an inchoate anxious present.

II. I hasten to add that Rembrandt's mother does not appear alone; she shares the catalogue with her husband, son, and daughter. Their depictions also include those by Rembrandt students Gerrit Dou and Ferdinand Bol, and colleague Jan Lievens. The family additions dilute somewhat the impact of the maternal theme.

As beautiful, and disturbing, as this collection of works is, the show is undermined by its problematic premise. Museum director Henriette Bolten-Rempt acknowledges this in her Foreword: "It has not been the museum's intention to provide a conclusive answer to the question of whether all these works really do depict Rembrandt's mother or father. But it did seem like a good idea to take a look at the myth's origin and to consider whether there were any solid historic grounds for it." Apparently there aren't many; at any rate, only slight evidence connects the depictions of the woman known as "Rembrandt's mother" to Cornelia ("Neeltgen") Willemsdr van Zuytbrouck, Rembrandt's actual mother. According to most scholars, such identifications of Rembrandt's family are "no longer widely accepted. At most, experts are prepared to admit that a number of works have traditionally been regarded as portraits of Rembrandt's father, mother, sister, or brother. For the majority of art historians, however, these are obsolete titles created purely out of an irrepressible romantic need" (8).

This statement places the curators in an awkward position because they argue otherwise, albeit covertly. Curator Christiaan Vogelaar and writer Gerbrand Korevaar support the identification of Rembrandt's mother by way of the seventeenth-century inventory of Clement de Jonghe, a print and art dealer whose holdings included pictures titled "Rembrandt's mother" (36-7). Vogelaar argues that Rembrandt used his family in Leiden in the same manner as he later did with his wife Saskia, lover Hendrickje, and son Titus in Amsterdam (21).

The writers' stances are rarely directly indicated but may be deciphered in the gaps between an essay and its notes. Korevaar, for example, concludes that only Rembrandt's mother may be "sometimes identified" "albeit with a question mark"; without additional archival evidence, "we must regard these identifications as myths" (50). Yet in his note he asserts that the myth "has perhaps been too zealously 'deconstructed'" (52 n114). Vogelaar himself concludes that while many attributed works are no longer tenable, due to dating or dissimilarity, there are "sufficient grounds" for accepting several "authentic pictures of Neeltgen van Zuytbrouck" though none of her husband Harmen Gerritsz (27-8).

The impulse to identify Rembrandt's models with his family arises from his naturalism: his lifelike renderings transformed figures into individuals who became "automatically associated with people in his real life" (35). Mistaking naturalism for actuality is a constant bane of Dutch art historiography, especially potent when combined with a romantic disposition; only in the 1950s did archival research counter such excess with historical context (50).

Two questions come to mind in regard to the above: first it seems unlikely that Rembrandt's parents, a busy miller and a mother of seven children, would find the time to sit at such length for these tronies - experimental exercises in human expression - when any visually arresting model would suffice. Rembrandt never did execute formal portraits of his family, but transformed them into characters in his history paintings, for which the tronie could be the model. The second concerns Korevaar's claim, based on Jan Jansz Orlers, Rembrandt's first biographer [1], that Rembrandt was particularly devoted to his parents. Orlers's entry mentions nothing to that effect, though it does make the case for his parents' remarkable sensitivity to Rembrandt's artistic aspirations when they had prepared him for civic office. Rembrandt's return to Leiden after studying with Pieter Lastman in Amsterdam implies less his fondness for his parents than the economic advantages of living in Leiden, rent-free, and, due to the absence of a painters' guild of St Luke there, dues-free as well. Many unmarried offspring lived in the parental home. Finally, Rembrandt's filial devotion did not extend to his mother's widowhood in 1630, soon after which he moved permanently to Amsterdam.

III. The catalogue's seventy-one entries fall into sections of "mother," "father," "brother," and "sister," ordered in decreasing numeric or pictorial impact. Rembrandt's mother accounts for thirty, two of which - one by Rembrandt (Old Woman Reading a Book, also called the prophetess Hannah, cat. no. 17) and the other by Dou (Old Woman Reading a Lectionary, cat. no. 19) - are both the most frequently reproduced and exemplars of the two artists' divergent styles, Rembrandt's more evocative, Dou's more descriptive. The depiction of Rembrandt's father is characterized by a split in identifications: the model - a man with a "pointed face and grey moustache," (150) - that comprises most of the images encountered a substantial challenge with the 1907 publication of a "previously unknown drawing" (cat. no. 59, Portrait of the Artist's Father, c. 1630), which presented an entirely different physiognomy. Bearing an inscription declaring it as Rembrandt's father, the accuracy of the identification relies on the inscription's authenticity. The writers believe it to be autograph, rendering the previous likeness a mere model used by Rembrandt's Leiden group (189-90). Rembrandt's brother, Adriaen, and sister, Lysbeth, don't command nearly the attention pictorially or intellectually that their parents do, and leave little mark.

IV. The exhibition's title misleads slightly: the show involves not mothers, but connoisseurship and art historiography underlain by a different theme altogether: artistic virtuosity and the depiction of old age. The myth of Rembrandt's mother, for myth is what it seems to be, is most usefully replaced by the particulars of artistic production and competition. Rembrandt and his circle didn't choose beauty, as the Italians might have, to showcase their skill, but its antithesis-the ravages of age. Volker Manuth and Marieke de Winkel describe Rembrandt's attraction to "lived-in characters" and to ruins: "It may be that elderly models presented more of an artistic challenge to Rembrandt than smooth young faces" (67). Korevaar notes the attraction of the wrinkled face [2] to demonstrate Rembrandt's "enormous versatility" and meticulous fashioning (164). Strikingly, Rembrandt was drawn to this subject matter in his youth, when old age would have merely represented an artistic challenge met by the aestheticizing smooth surface of the fijnschilder rather than his later lived experience of age, rendered by a more truthful brutal brushstroke.

If age rather than family becomes the exhibition's leitmotif and vehicle for artistic virtuosity, Anouk Janssen's essay, "The Iconography of Old Age and Rembrandt's Early Work" supplies a thorough resource of its history. Moving from sixteenth-century pictorial tradition and its themes to the ages of life and the elderly as models of piety or avarice, she shows that old age was never a neutral condition. Nor is it now. Paging through the numerous images detailing faces of ruin, wrinkle, and crevice, with sunken cheeks, missing teeth, and dim eyes provides a disheartening tour. Age sits heavily upon the woman known as Rembrandt's mother; Neeltgen would have been about sixty-three when the images were executed. The burden of growing old falls heaviest on women who become despised when "devastated" by age. [3] That Rembrandt and his circle depict old women sympathetically, often adorning them richly, doesn't soften the pitiless images. Viewed as a group from our current social demographic, the images also serve as a warning, an extended vanitas of sorts, no longer veiled by a nineteenth-century romance of motherhood. While young Rembrandt mined the schilderachtig ruins of age for his great artistic achievements, he gave no thought to maternity or female aging. The question left unaddressed by this exhibition catalogue is not whether the assiduously depicted woman was Rembrandt's mother, but why such a question has retained its hold over the last four centuries. Answering that question would produce a modern show.