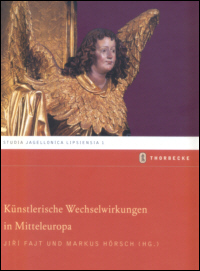 "Künstlerische Wechselwirkungen in Mitteleuropa" is intended to initiate a new series (Studia Jagellonica Lipsiensia) sponsored by the Geisteswissenschaftliches Zentrum Geschichte und Kultur Ostmitteleuropas an der Universität Leipzig (GWZO), although it is not the first such volume to have appeared. [1] Ultimately this series owes its inspiration to Robert Suckale, the dedicatee of the present volume. In 1994 Suckale had first proposed an exhibition and research project on the Jagellonians; its earlier results have been realized in a conference and publication [2], which is recognized by the editors in their introduction as a predecessor to this book. Suckale's own work is also frequently cited as a model.

Unlike the other books in the series, the present collection of twenty-one papers, while largely on the medieval period (8), is only loosely connected with the Jagellonians in either time or place. Topics range from the interpretation of French elements in thirteenth-century sculptural fragments in Hungary (Imre Takács, "The French Connection. On the Courtenay Family and Villard de Honnecourt apropos of a 13th Century Incised Slab from Pilis abbey") to an analysis of the Central European (as opposed to Lübeck) elements in an imported fourteenth-century altarpiece in Sweden (Peter Tångeberg, "Der Flügelaltar in Toresund, Schweden. Beziehungen zwischen Ostmitteleuropa und dem Ostseeraum") to a comparison of post-World-War II treatment of monuments in areas taken from Poland and given to the U.S.S.R. with those taken from Germany and given to Poland (Tomasz Torbus, "Zwischen Sprengung und Modellbau. Vergleichende Anmerkungen zum Schutz des Kulturerbes in den polnischen 'wiedergewonnenen Gebieten' und den ehemals ostpolnischen Regionen nach 1945"). Some essays have nothing to do with the Jagellonians, nor with the territories they controlled, nor even with the purported geographical purview of the GWZO, but instead relate sculpture and painting in central Germany to art in Bohemia from the period of the Luxemburgs and to the interregnum before the Jagellonians.

Nevertheless, taken as a group this small set of essays on Germany and Bohemia presents such evidence as is offered in this book for the mutual effects ("Wechselwirkungen") promised by the title. Markus Hörsch ("Paris - Prag - Würzburg. Die Madonna in Nordheim am Main und ihre kunstgeschichtliche Stellung") points to the French stylistic origins of sculpture probably originating in Würzburg, and in turn to the mediation to Prague in the period before the Parlers of such features through Franconian artists. On the other hand, starting from the attribution of a painting in Berlin formerly seen as Bohemian (Stiftung Preußischer Kulturbesitz, Gemäldegalerie) Maria Deiters ("Flötz - Barby - Magdeburg - Prag. Zur Kunst des magdeburgischen Raumes im späten 14. Jahrhunderts") characterizes art in the Magdeburg region and interprets it as influenced instead of being made by Bohemian artists. In one of the most important contributions in the volume Stefan Roller ("Pilsen oder Nürnberg") attributes the now well known Crucifixion group from Pilsen, the center piece of an exhibition held a decade ago on the Gothic in west Bohemia [3], to an artist from Nuremberg who then traveled and worked in Pilsen.

Another coherent set can be formed from papers that provide new views of Jagellonian Cracow, even though they have little to say about mutual effects. Paul Crossley traces the route of the coronation ceremonies in the old Polish capital, relates them to a Czech model, and suggests that the architecture of the Wawel Cathedral may be read as a response to the coronation ordinal. Wilfried Franzen ("Nikolaus Haberschrack und der 'Meister der Chöre'. Beobachtungen zur Krakauer Retabelkunst um 1460/70") treats an altarpiece in that Cathedral, tracing the origins of the artist to the Upper Rhine, and connects him convincingly with the royal court. Franzen also comments on the reception of Netherlandish clay sculpture in Poland: the diffusion of Netherlandish sculpture in this medium before iconoclasm is a subject worthy of much further study, paralleling the better known export of wood altarpieces and anticipating the later diffusion of Netherlandish alabasters and bronzes. Jiřř Fajt ("War Veit Stoß der Erste? Zur Rezeption oberrheinischer Kunst im Krakau des 15. Jahrhunderts") complements Franzen's paper by redating the remnants of the central shrine of the St. John altarpiece (now St. Florian's Church, Cracow) to the same period as the altarpiece discussed by Franzen, noting its Netherlandish elements, and tracing these and its creation to the hand of an Upper Rhenish master of the generation before that of Veit Stoß, whose work it anticipates. Agnieszka Gąsior ("Hans Süß von Kulmbachs Krakauer Karriere") surveys the artist's paintings for Polish patrons and argues convincingly that he in fact visited Cracow circa 1511.

While all the essays in the volume do deal with transnational subjects, all are on very specific topics. Moreover, almost all take rather traditional approaches to questions of style and iconography, mainly involving questions of origin and dating. None comments on truly broader questions of interpretation, and there is no broader historical synthesis or overview present, nor much of a general introduction, either. While some prominent scholars (Crossley, Fajt, Labuda, Marosi) are represented, and all the papers are of a respectable standard, the volume thus lacks coherence. The general approach of these very miscellaneous essays may be said to transcend national boundaries, and evidence is provided for what, as the authors mention, is now called "Kulturtransfer" (8). Little advance seems however to be made beyond what they describe as the previous century's predilection for accounts of "Strömungen" or "Einflüsse", and the picture they decry of "influences" coming from the west is not much altered.