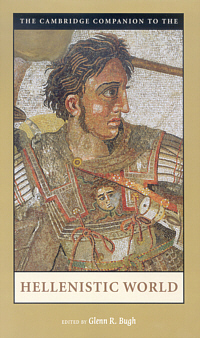 The Hellenistic world presents a problem of definition. We can take a straightforward temporal approach: it begins with the death of Alexander in 323 and ends at the death of Cleopatra in 30 (or, if an earlier date is preferred, the sack of Corinth in 146). But it can also be viewed as a cultural phenomenon. Thus when Droysen coined the term "Hellenismus", he had in mind the merging of Greek and Eastern culture, something that was in itself a consequence of Alexander's reign. If, however, a phenomenon of this type is the essential characteristic of the Hellenistic world, evidence for it might well be adduced from before the Alexander, for instance the influence of Greek culture in Lycia. Yet, on this view some parts of the Greek world might not be Hellenistic at all - in the West Greek culture could be seen as being on the defensive. Thus we end up with a Hellenistic world which temporally and geographically does not fit properly - it starts before Alexander and does not cover the whole Greek world. We might prefer to define it as the age of kings or as the Greek world after Alexander. Instinctively things Greek are central but once that is acknowledged there is the problem of what to include and what to exclude and under what concept of Hellenistic. The Hellenistic period introduces students to a complex, multi-cultural world that in many ways refuses to allow itself to be easily defined. This very complexity may be one of its attractions in a post-Soviet world.

The extensive specialist scholarship on the Hellenistic world over the last 20 years is now becoming accessible to a broader English-language audience. Those teaching in universities have several general studies which they can assign to their classes: in addition to Glenn Bugh's very welcome Companion there is Graham Shipley's invaluable The Greek World after Alexander323-30 BC (London 2000) and my own Companion to the Hellenistic World (Oxford 2003). Bugh's volume contains 15 essays, each with bibliographical notes, together with maps, a timeline and an appendix on the Hellenistic dynasties. Bugh has brought together some of the leading figures in Hellenistic scholarship who have been challenged by their editor to think "outside of the box" (6); the result is a stimulating collection on central themes in Hellenistic scholarship. It is very much a companion and needs to be read alongside a fuller account of the Hellenistic world, one which will supply some sense of narrative and of the individual Hellenistic dynasties. Bugh explains the task of this collection of essays as "to identify and explain what was new and different about the Hellenistic world and what was more properly a continuation of ideas, customs, and institutions, and so forth, already evident in the Classical period" (2). The focus, as this implies, is on the Greeks, doubtless a necessary limitation if such a volume is to be manageable, but perhaps giving rise to a distorted image of the Hellenistic world. Apart from Erich Gruen's chapter on the Greeks and others, the non-Greek population tends to make interventions in chapters rather than being the subject matter itself.

The collection opens with A. B. Bosworth's chapter, "Alexander the Great and the Creation of the Hellenistic Age" which could almost have been entitled "Droysen and the Creation of the Hellenistic Age". He emphasises that the fragmentation of the empire meant that Alexander's successors were operating in very different circumstances to Alexander himself, however much they may have tried to imitate him. It is followed by Winthrop Lindsay Adams' contribution, which covers the wars of the successors and the three key dynasties within a single chapter. This has the advantage of allowing comparisons and contrasts to be made between the dynasties, something less likely to be achieved if there were a chapter on each dynasty. Shipley and Hansen address the polis and federalism; in line with much recent scholarship they reject the old "death-of-the-polis" model and prefer to see the polis as undergoing continuous gradual development. To explore the old and new polis they take two case-studies, Athens and Alexandria, both well-documented but both also atypical.

John Davies in his chapter on Hellenistic economies offers the most comprehensive account of the Hellenistic world in the volume; it is concise, clear and essential reading. Most striking is his graph representing the number of recorded Mediterranean shipwrecks that shows a dramatic increase in the Hellenistic period, a physical manifestation of the increased economic integration of the Mediterranean at this time. Dorothy Thompson provides an excellent introduction to the Hellenistic family, setting it neatly in context and delineating the main areas of debate, royal families, Greeks abroad, and usefully the non-Greek family. The Egyptian emphasis reflects Thompson's own research interests and complements Riet van Bremen's "Family Structures" in my own Companion (313-30), the latter with a focus that is more epigraphic and more directed at Asia Minor and the Seleucid kingdom. Migration brought Greeks that much closer to the non-Greek and as Gruen points out in his opening sentence, "whatever else the Greeks were, they were not barbarians". Yet, argues Gruen, Greek and non-Greek cultural identities were in practice often more complex and hazy than this familiar rhetoric suggests. Susan Rotroff's chapter is especially valuable as it is probably the first attempt to treat Hellenistic material culture in a single synthetic essay; she covers questions of chronology, trade, dining, acculturation, evocation of the past, and gender (the mirror for women and the strigil for men as grave gifts). To survey the religion of the Hellenistic world would be a daunting task and Jon Mikalson's title, Greek religion, signals the direction he will take. Even limited in this way the subject matter is extensive, traditional polis religion, ruler cult, the introduction of new cults, and royal patronage. Mikalson asks what the impact of so much migration from old Greece to the new cities would have had on religion and suggests that it may have led religion to become a choice in a way in which it would not have been in the old poleis where it was part of the pervasive structure of the city.

Artistic and intellectual life is the subject of several chapters. Graham Oliver explores historiography and rhetoric; taking Polybius and his history as the starting-point he moves on to illuminate the intellectual and educational context that the Hellenistic elite operated in. Nita Krevans and Alexander Sens outline first the new linguistic and intellectual contexts of the post-Alexander world (primarily the development of koine and Ptolemaic patronage) before surveying the most important poetry of the period, while Robert Sharples present a succinct review of the main trends in Hellenistic philosophy. An unusual approach is taken by Andrew Stewart in his chapter on Hellenistic art. To demonstrate that the Hellenistic period was not a time of artistic sterility he details twenty innovations in turn. It is a thought-provoking survey; the lack of an authorial overview is missed but allows many opportunities for student assignments: why these innovations? do they have anything in common? are they Hellenistic? Innovation is again evident in the chapters on science, medicine and technology and on military developments. Scholarship has often depicted a negative view of the Hellenistic world, a culture in decline, but together these chapters give a strong sense of its vitality; this was a society engaging with the world around it.

What is interesting about collections such as this is the way in which they bring together different strands of scholarship. What sort of Hellenistic world emerges? Where the emphasis has in the past been on the interaction of Greek and non-Greek this collection reveals that equally or more significant was the effect of the fusion of diverse Greek cultures as migrants from many different poleis came to live together in the new Greek cities of the East. This affects, for example, religion, language, and literature. In the city and beyond we see greater flexibility and fewer barriers: the polis becomes less exclusive, women play a greater role, economies are more integrated, there is marriage between Greek and non-Greek, literature becomes Greek rather than local. Yet paradoxically running parallel to this are greater rigidity and sharper divisions but these divisions separate top from bottom rather than city from city, reinforcing the position of the king, the civic elite and the self-consciously intellectual poet.