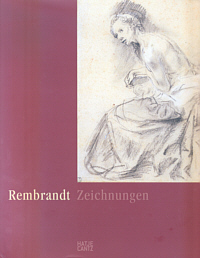 Curator Holm Bevers worked on this catalogue for many years, specializing in the fascinating, but complicated world of drawings by Rembrandt, his pupils and his followers. The result of Bever's research is that of the 126 drawings from Berlin, ascribed to Rembrandt in the general catalogue of Otto Benesch, published for the first time in the years 1954 to 1957, now 55 remain attributed to the artist, which is a huge reduction. This tendency however could also be seen in the catalogues of the Amsterdam printroom (1985), Rotterdam (1988), Paris (1988-89), London (1992) and Dresden (2004).

Bevers introduces to his catalogue with a text about aspects of Rembrandt's art of drawing. First, attention is paid to the characteristics of the drawing technique, the paper and inks. Then, the author discusses the subjects Rembrandt has drawn, the stories from the bible and from mythology, figure studies, landscapes and animal studies. Rembrandt was inspired by Italian artists, but also by Lastman. The author regrets that no example of the copies after Indian miniatures are represented in Berlin. The genre drawings are discussed and also Rembrandt's rare portraits. Then his working process is described and the function of the drawings is analyzed. The introduction ends with a short history of the collection, which was formed in principle in the 19th century. In the 20th century hardly any drawing was bought and the author regrets that the chance to buy from the Chatsworth collection was not taken.

In the following catalogue, Bevers discusses the 55 drawings he considers to be by Rembrandt himself. The entries are very precise, thoughtful and well-written, starting with extensive descriptions of the subject and the way Rembrandt executed it. A critical reader, however, might always ask for more. Looking at catalogue no. 1, Study of an Old Man reading a book (drawn in red and black chalk), for example, one wonders how and why Rembrandt used two colours of chalk and what colour he started with, or if he used both colours at the same time. Or take cat. no. 6, Landscape with farms, where at the end, Bevers mentions the identification by Broos with the village of Sint Annaparochie, without making any further comment. But apparently he was reluctant to agree, since he did not include the name of the village into the title. In cat. no. 8, Carrying of the Cross, the stain in the middle is well observed, but Bevers is not able to explain it. The vertical lines of the figure behind the cross go right through the cross, and one wonders if the stain could be a covering-up of these figure-lines. Cat. no. 17, Selfportrait: the drawing was identified as a studio work by Ernst van de Wetering, but I think Bevers is right to consider it an original; his dating to 1636 seems to be too early, why not circa 1645? The wrinkled face looks more like that of a person of 40 than of 30 years. In cat. no. 21 Bevers understands the three standing figures at the right as a beggars couple asking a man for alms. I think, however, that these three do not have anything to do with each other and that the drawing rather assembles three independent studies of figures. Moreover, the man at the left does not seem to beg, but is apparently making noise with a rattle because he is leprous.

In cat. no. 22 Bevers does not describe the different figures; I suppose that the old woman on the left, telling something to an astonished young lady, represents Vertumnus trying to convince Pomona. In the sketch of a woman on the right, it remains a mystery with what kind of object she is pointing to the right.

In cat. no. 28 the woman is not carrying dead ducks, grabbing them at their paws, but living birds, probably chicken, looking around with their heads up. For cat. no. 31 Bevers points out that the attribution is not certain; in my opinion it is a wonderful drawing, with an extremely witty dog, and should therefore be ascribed to Rembrandt. As for cat. no. 41 one might have doubts concerning the attribution; for example the horizon at the left is curiously high. The authenticity of cat. no. 45 should in my opinion also be questioned; the drawing shows very unclear details, for example in the arms and the feet of both figures. Moreover, there are many curious corrections in the background and very curious is also the repetition of the right shoulder of Joseph at the upper right.

Bevers writes that in cat. no. 53 the left figure is carrying a hat, which I can't discern in what rather seems to be a sort of triangular form. Bevers reads the separate sketch of a head as a face with a long beard, but I see no eyes or nose or cheek. It is as if the face had almost completely been covered by a kind of niqaab.

After having dealt with the 55 drawings by Rembrandt, Bevers writes an interesting introduction to the drawings by the pupils, of which only 25 are described in the catalogue. Of the 126 drawings in Benesch only 43 % are still accepted by Bevers as being by Rembrandt. As for his criteria for doing so, Bevers writes: "Basis for every judgement of a drawing is the comparative study". Anyhow, in this volume he does not discuss all the drawings not by Rembrandt, but promises a separate catalogue of the drawings of the Rembrandt-school. For the 25 school-drawings discussed here Bevers does not want to make final decisions, but rather prefers to develop hypotheses put forward for discussion.

These drawings are illustrated, but the captions only contain the name of the artist, the title and the date; for technique, measurements and literature one has to read the whole entry to find the passages where the drawing is discussed, and where then these important bits of information are given in a footnote. One has the impression that only those drawings are mentioned here about which Bevers had something new to say. They are not chosen as a representative selection, because the names of, for example, Govaert Flinck, Samuel van Hoogstraeten and Nicolaes Maes are missing.

Gerbrand van den Eeckhout is by far the most discussed artist, with 6 pages of text and 5 illustrations. Karel van Savoy has only one page with one illustration. Fairness forces to say that sometimes the reader, knowing that these drawings feature as Rembrandt-drawings in Benesch, is surprised to find them as by Eeckhout. Compared to the "safely" attributed drawings of this artist (illustration page 197) there are remarkable differences concerning the drawing style. And it is, for example, not easy to believe that the "Standing actor" (illustration page 196, Benesch 316), a brilliant drawing with powerful pen- and brush strokes, should not be by Rembrandt. But one needs time when studying drawings. The same surprise happened with the two landscape drawings always considered as being by Rembrandt (pages 202 and 203), but in 2000 attributed by Martin Royalton-Kisch to Constantijn van Renesse. At first, this was a shock, but while studying this idea for a while and comparing the drawings with the other few late Rembrandt drawings, one starts to see some similarities to this amateur artist Van Renesse. Anyhow, several of the reconstructed oeuvres by artists like Van Renesse remain problematic and evidence is fragile. This is, for example, true for the drawing now attributed to Carel Fabritius: there is no securely attributable (signed, dated) drawing known by him, so attributions have to be more or less speculative. Also the works ascribed to Willem Drost in this catalogue show a curious mixture of drawing styles and it is not easy to accept the very powerful drawing "The prophet Elia the brook of Krith"(page 209), always considered as being by Rembrandt, as a work by Willem Drost.

Bevers did a thorough work, with very careful and serious considerations, and produced an important catalogue which is on the level of the status of this collection. Time will show which attributions and deattributions will persist.