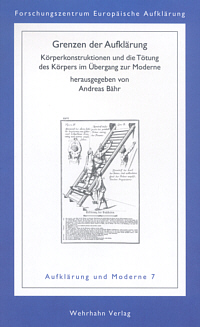 Over the course of several decades now, scholars have been busily historicizing subjects once reflexively taken to be biologically essential or impervious to historical analysis: sex, bodies, and emotions, to name just some. Michel Foucault's œuvre remains foundational here and even those who doubt his findings and his methods have been deeply influenced by his insights. "Grenzen der Aufklärung" accepts Foucault's understanding of the body as a locus of power and knowledge. Equally prominent is Foucault's still startling contention that the humanitarianism of the late eighteenth century, that combated the brutality of gruesome corporal punishments (such as drawing and quartering) and substituted prisons (and, eventually, rehabilitation), for them was not the expression of a transparent "civilizing process" but rather the birth of a sinister carceral society. Ever-expanding power worked most efficiently because it acted on, and with, minds, not bodies. Although the contributors to this volume acknowledge their debt to Foucault, they by no means slavishly follow in the master's footsteps. Rather, by creatively engaging with many Foucauldian perspectives, they craft subtle and historically relevant revisions of them. Indeed, one of the critical perceptions here is that bodies still mattered. Thus, "Grenzen der Aufklärung" pulls together several strands of historical inquiry by focusing on bodies and death, the limits of enlightenment, the role of the state, and the production of discourses. As the editor points out, this volume "nähert sich der Geschichte des Körpers in der Aufklärung von der Grenze her: im Augenmerk auf tödliche Verfügungen über diesen Körper." (14)

The subject, therefore, is the "unterschiedlichen Formen des tödlichen Umgangs mit dem Körper" (19). The authors address the question not only of what a body actually was (and there have been numerous studies of this topic alone), but also, more intriguingly, "wer über welchen Körper verfügen konnte." (18) One must work a bit to extract this rather clever idea from some difficult and dense prose in the introduction, yet once that work is accomplished, one perceives a framework that allows each contributor to examine one aspect of this "Verfügung" : executions, suicide, sacrifice, torture, and, finally, apparent death. Any scholar familiar with this period will immediately recognize these issues; but each should be impressed by the new ways in which old topics are recast and the (at times) provocative and (generally) convincing interpretations that result. If the clarity of presentation sometimes suffers from a few rhetorical flourishes (or simply jargon), that jarring note does not prevent the reader from appreciating the penetrating analyses the volume as a whole embodies.

Perhaps most important is that although these essays focus on the body, they all adroitly link physicality - and Körpergeschichte more generally - to a series of far broader historical issues. One critical topic is the legitimation of the use of force in a society; by whom, on whom, and in what circumstances. Jürgen Martschukat in his essay on "Die Zerstörung des Körpers als Zeichen kultureller Ordnung" examines executions and finds that the Aufklärung did not effect an end of force but simply redistributed it; "eine veränderte Codierung von Gewalt" then came to function as a marker of modernity. (26) Surely a Foucauldian insight? Yes, but Martschukat also delicately traces out how executions disappeared and were removed to a place where only those capable of not giving in to their emotions witnessed them. Thus the ability to look on horror without experiencing primitive and inappropriate "lusts" made one civilized. Physical force became, therefore, even more important as a marker of the modern civilized being.

Andreas Bähr takes up the theme of suicide and traces the development of a new "(Un)verfügbarkeit des eigenen Körpers." (65) He interprets this evolution as resulting from a new episteme; an enlightened episteme "in dem der Körper als Teil eines abgeschlossenen psychophysischen Systems, als Ort individuellen Leidens und inneren Empfindens erscheint" (66). This produced a moral and epistemological paradox (if I understand Bähr correctly). The Aufklärung supposedly nurtured "einen allmählichen Wandel von der Fremd- zur Selbstverfügung über den eigenen Körper." (63) Yet, in the case of suicide, we find both views: new justifications for the "right to suicide" and also "eine neue Unverfügbarkeit des eigenen Körpers." (63) But, perhaps that is not what he meant? In his effort to be subtle and to deal at length with complexities, Bähr unfortunately often leaves his reader (or this one at least) perplexed as to the exact development of his argument.

A central motif of both Martschukat's and Bähr's articles - the body as a form and area of communication - reappears in Christine Künzel's examination of the "sacrificial body," in her discussion of the sanctioning of sexual force, especially in the form of rape. Basing her argument on a range of literature, Künzel shows how rape, too, fit in "mit einem Prozess der Verinnerlichung aufgeklärter Körper- und Rechtsdiskurse, [. . .]" (93). Here she follows the movement in literary texts from the dismemberment of the female body as "Vergeltung" in earlier periods to self-condemnation, self-punishment, but also personal revenge. Again, the "open" and the "hidden", the "external" and the "internal", the "body" and the "not-body" are dichotomies that drive much of the argument, as they also do in Roland Borgards's probing discussion of torture in medicine and law. Again, his starting point - the history of pain - is not totally original, but his argument about the need for a "historicization of the pain of torture" is a novel twist (no pun intended) on an older topic. Concurrent with the legal discussion about torture, and especially about its abolition, ran a medical discussion about what pain meant, as a newly-enunciated neurology of pain. But the discourses differed. The medical discourse criticized the ability of physiological pain to produce legal truths, while, in law, the shift was to turn away from torture "zugunsten eines intensivierten Verhörs." Thus, in tracing these two largely independent developments, Borgards produces a strong argument against the idea of a hand-in-glove working of experts after 1750. The practice of torture and the medical theories of pain "einander bestätigend im Modell der Spannung" (124) until 1750; thereafter the explanatory strands unwound.

Finally, Stefan Haas, in his examination of the "disordered corpse," brings us into the arena of state policy by exploring how the Prussian administration in the early decades of the nineteenth century sought to establish and implement a new order of death. His points of entry into this subject are the discursive problem of apparent death (Scheintod) and burial practices. He poses Scheintod as "Indikator einer Übergangsphase in der Geschichte des Wissens," (127) raising a topic that many historians have viewed only as a curiosity or a footnote to a major moment of historical investigation. Out of this anxiety, this fear of a living death (or at least burial alive), arose an administrative problem for the Prussian state. In his careful delineation of how the Prussians implemented new policies on burial - the ordering of disordered corpses - Haas presents a subtle view of how administrations assumed the task of organizing a changing world. This slow step-by-step process proceeded by no means linearly and the authorities were not ham-fisted in carrying it out. Haas's perception is perhaps not shockingly new, but it very neatly illustrates how cultural history and political/administrative history can mutually fructify one another.

"Grenzen der Aufklärung", certainly, strikes yet another blow to the "enlightenment-as-progress" thesis - a bit of a dead horse by now, surely? Like Foucault, the volume also makes the Aufklärung a critical point of rupture, a discursive passageway, at the very least, into the modern world. That perception itself is not new; the number of works devoted to the limits of enlightenment is vast. The authors frequently verify - at least in their outlines - many Foucauldian perspectives. Where these essays differ from Foucault, where they are most fresh and original, however, is in their strong historical grounding. They cause us to return our gaze, yet again, to the crucial decades of the late eighteenth and early nineteenth centuries and to reassess the frameworks which we once, and not so long ago either, facilely accepted.