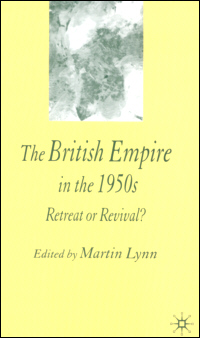 It is often with a degree of dread that a reviewer picks up an essay collection based on a conference: in many instances the quality of contributions vary dramatically, some do not appear to really fit with the overarching theme and, worst of all, some 'offenders' have submitted nothing more than a hastily revised lecture manuscript. In the case of this volume, none of these fears are realised; in fact, this book is a model of how conference papers should to be transformed into readable and original articles which form a unified whole. All ten chapters are based on presentations made at a colloquium held at Queen's University, Belfast, in September 2004, and the authors are all acknowledged experts in the field of British imperial and colonial history.

The overarching themes of the volume are outlined by the editor in an introduction which is a model of clarity and precision. The end of the British Empire - in particular, how and when this took place - has been one of the central questions of imperial and Commonwealth history for many years and, as Lynn notes, "the more that historians have published [...] the more, not less, complex the phenomenon has come to appear." Nonetheless, there is broad agreement that decolonisation "should not be seen in terms of a linear progress towards an inevitable conclusion", and that this view "ignores both the determination of policy-makers to maintain Britain as a world power after 1945 and the potentialities within Britain's imperial position in these years" (1). The aim of this volume is to examine the complexity of British government policy towards imperial challenges by concentrating on the 1950s, which have been sandwiched between the immediate post-war period (dominated by the end of British rule in India) and the 1960s (which culminated in the withdrawal from east of Suez). The editor makes no apologies here for the clear overlap with both decades in several of the contributions and he highlights the fact that the 1950s was not a period when British policy marked time, rather it witnessed a series of significant initiatives.

Lynn is also quite right to point out the ambiguous nature of the 1950s, during which policy-makers seemed to oscillate between a strong desire to maintain Britain's colonial possessions and an awareness of the need to reduce commitments abroad. That there was no unanimity over policy can be explained in part by the continued importance of Empire for the defence of Britain's overseas interests. But the Cold War, the rise of Europe in international affairs, the significance of oil and other vital strategic interests in the Middle East, relations with Australia and New Zealand, and a host of other considerations, also made it extremely difficult for policy-makers to see clearly into the future.

If there is a bias in this volume, then it is a most welcome one towards British policy on Africa: there is a contribution by Philip Murphy on the origins of the Central African Federation; one by Sarah Stockwell on the interest shown by British policy-makers towards colonial mining in Africa in the 1950s; a more specific chapter by Richard Rathbone on the erosion of local government, local justice and civil rights in Ghana in the second half of the decade; and another by Martin Lynn on British policy and Nigeria in the same period. Yet there are other chapters on rather more general and familiar areas: Stephen Ashton has contributed a piece on the assessment by the Colonial Office of the future of British imperial interests as conducted up until 1962; there is one by Nicholas J. White on the view of decolonisation taken by British business; Nigel J. Ashton has written on the Anglo-American revival and Empire during the Macmillan years, 1957-63; and, Wm. Roger Louis has provided an analysis of Britain's treatment at the United Nations over its colonial policy, 1957-71.

What these eight chapters have in common is that they are all based on solid archive research, and tend to concentrate very strongly on providing analysis of official British policy and the views of policy-makers. While this makes the volume easy to classify, it still manages to cover a remarkably wide range of issues. What makes it especially useful is that it takes a broad view of Britain's imperial and colonial policy in the period while successfully avoiding the temptation to revisit the Suez Crisis (although that pivotal event is always lurking in the background). The slant towards British policy in Africa, which probably reflects the research interests of the editor, is in fact a much needed corrective to previous work on post-war colonial policy. Likewise, by not confining all the contributions strictly to the one decade, the volume manages to relocate the 1950s within a much broader post-war perspective.

The first and the tenth and final chapters contribute further to the value of this collection by examining two very broad themes of post-war British imperial and colonial history: John Darwin sets out to answer the question, "Was there a fourth British Empire?", while Stephen Howe examines the issue of "internal decolonisation" in British culture since the 1950s. Darwin argues that however strange the term "fourth Empire" (its major architects were Bevin, Cripps and Attlee) may seem, it was in currency during the Second World War. He provides an ideal introduction to the other pieces by placing the "fourth Empire" within the context of its three predecessors, and argues that until the early 1950s there still seemed to be some hope that this new imperial order might be established. Howe succeeds in rounding off the book by discussing why this decade appears in retrospect to be such a time of stagnation in terms of British society's "internal decolonisation", arguing that in the 1950s Britain was still too concerned with the effects of the war and austerity to have had the time or inclination to be - or try to become - "post-imperial".

In short, this is an important contribution to the history of British imperial and colonial policy in the post-war period which succeeds in providing some new perspectives on several scholarly debates, while at the same time offering a useful overview of a range of themes associated with British policy in this era. Its awareness of the importance of policy towards Africa in the 1950s and beyond lends it particular value for the ongoing re-assessment of post-1945 British colonial policy. The book can be recommended as ideally suited for students taking courses on British imperial and Commonwealth history.

The only note of regret to be sounded is that the editor, Martin Lynn, who was Professor of African History at Queen's University Belfast, died shortly after completing this volume and, unfortunately, did not live to see the fruits of his labours in print. It is only fitting, then, that The British Empire in the 1950s should open with a five-page tribute to him by one of his colleagues at Queen's University. The book is rounded off with a useful index, something which is often missing from edited collections.