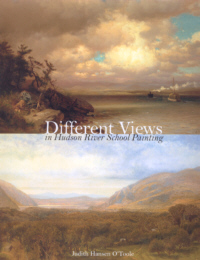 It should come as no surprise to readers of this journal that vanity is frequently the motive for publishing exhibition catalogs. In the case of the catalog under review, vanity takes a variety of forms. There is, first of all, the vanity of a collector eager to see more than a hundred of his paintings catalogued and reproduced in color. (That the collector prefers to remain anonymous even though his name is well-known to scholars, curators, and art dealers can itself be accounted a type of vanity.) Then there is the vanity of a provincial museum director, who appears determined to demonstrate her prowess as a scholar despite her relative ignorance of the subject at hand. Finally, there is the vanity of a well-known university press which, when confronted with the prospect of "generous support" from the Heinz Endowments, abandoned the scholarly and editorial standards for which it is known to publish a glossy if ill-conceived picture book. The result is the intellectual equivalent of Heinz's ketchup: colorful, cloying, messy, and altogether lacking in nourishment.

Judith Hansen O'Toole's noncommital title points to the catalog's fundamental incoherence. In the second of two introductory essays, this one entitled "American Scenery: Themes, Symbols and Pairings in Hudson River School Painting", O'Toole makes the commonplace observation that beginning with Thomas Cole, Hudson River School artists created pairs and series of paintings. Some, such as Cole's five-part Course of Empire (1836) series, Asher B. Durand's Morning of Life and Evening of Life (1840), and Jasper Cropsey's Spirit of War and Spirit of Peace (1851), were elaborate allegories with literary, historical, and religious pretensions. Others were merely simple pairs contrasting the times of day or the seasons. Apparently O'Toole's initial idea was to exhibit "intentional" pairs drawn from the anonymous collector's cache of more than 300 Hudson River School landscapes. Thus she claims that Different Views "is the first study to concentrate on illuminating the particular practice of Hudson River School artists to create pairs, series, and groups of paintings that are thematically related." (10) However, O'Toole was able to find among the anonymous collector's holdings only fourteen such pairs and series. To round out the exhibition, O'Toole in collaboration with the collector chose another eighty paintings, which she grouped under such headings as "Weather Conditions, Atmosphere, and Mood", "Nature without Man", "Man's Impact on Nature", etc. These headings were divided into such subheadings as "Artists in Nature: Painting the Wilderness", "Haying Scenes", "Landscapes with Deer", "Fishing", "Bridges", "Views of Lake George", "Niagara Falls", etc., categories that seem as arbitrary and ahistorical as the categories in Jose Luis Borges' fictional "Chinese" encyclopedia.

In her introduction, O'Toole makes portentious gestures in the direction of iconographic and iconological approaches along with an obligatory reference to Erwin Panofsky's Studies in Iconology (1939), but there is nothing methodical or systematic about her discussion of landscape imagery. While in her two introductions she fumbles for rationales to justify a bloated hodge-podge of an exhibition, in the sections devoted to the paintings themselves she is for the most part content to describe the works without referring to the historical conditions under which they were created, the social purposes they served, or the pictorial conventions the artists employed. Often no generalization connects the works grouped under a particular subheading. For example, O'Toole has nothing to say about Lake George, a subject that was in the nineteenth century often linked to the history of the American Revolution as well as to summer holidays, but instead limits herself to remarks that often add up to no more than a series of dissociated observations: "To the painter John William Casilear, Lake George was a siren to which he repeatedly returned, using its changeable character as a springboard for his paints and canvas. Light is the true subject of this composition, with its delicate subtleties playing across water, land, and sky ... . On the right, a tree rooted in the rocky shoreline at once lifts its leafy branches toward the sky and reaches yearningly toward the water. The air is pure, sweet, and crystaline." (134) The passage exemplifies O'Toole's lack of precision as a writer, her penchant for clichés and mixed metaphors (a lake as a "siren"; the lake's "changeable character" as a "springboard" for "paint and canvas"), and her tendency to anthropomorphize her subject (thus the pathetic fallacy of a tree that "reaches yearningly toward the water").

To be sure, O'Toole's interpretations of individual paintings are for the most part innocuous. Not so, however, her introductory essays, which students and general readers might mistake for a serious scholarly effort. Here I encountered not only botched and implausible interpretations, gross oversimplifications, and vague generalizations about American art and history, but also numerous errors of fact. Some examples: Thomas Cole "made his permanent home, which he named Cedar Grove, near Catskill, New York" (14). (In fact, in 1836 Cole moved into his uncle-in-law's house which was already named Cedar Grove.) Cole's many "series also became generally well known to the public through prints after them, such as James Smillie's engraving of The Voyage of Life commissioned in 1849 by the American Art-Union." (15) (In fact, Smillie engraved only Youth, the second of the series' four paintings, for the Art-Union; Smillie's set of four engravings of The Voyage of Life series was published in 1856 and was not commissioned by the Art-Union which was by then defunct. I note as well that contrary to O'Toole's assertion, none of Cole's other series was ever reproduced in the nineteenth century). Errors such as these are for the most part merely irritating but taken together they demonstrate the author's lack of familiarity with the relevant scholarly literature.

Even worse is the author's arbitrary use of documentation. Her frequent resort to endnotes in the two introductory essays gives her writing the appearance of scholarly scruple; however, many of her assertions go unsubstantiated. Thus, O'Toole claims without proof that "early writers lamented the lack of splendor in our topography and could make no sense of the undomesticated tangle of our wilderness." (13) Similarly, she writes at some length about Nicolas Poussin, Claude Lorrain and Caspar David Friedrich but there are almost no references to the extensive scholarly literature devoted to these artists. Overall, O'Toole's references are perfunctory and unreliable. For example, she misquotes a well-known statement by Thomas Cole about the painter's need for "time to draw a veil over the common details, the unessential parts, which shall leave the great features, whether the beautiful or sublime, dominant in the mind," which she attributes to the artist's famous "Essay on American Scenery" of 1836 (12), but which in fact appears in a letter to Durand of 4 January 1838, an error that might be especially irksome to the anonymous collector who, it is known, has a close familiarity with Cole's writings.

Ultimately, Different Views represents a lost opportunity. The study of Hudson River School landscape painting has advanced considerably in recent years but much remains to be learned. It is not difficult to imagine an exhibition drawn from this collection that would illuminate some as yet unexplored aspect of the school's history. The collection mainly consists of smaller works, some measuring as little as 20 x 36 cm. Since the Hudson River School is known primarily for outsize, crowd-pleasing extravaganzas, Cole's Oxbow, Church's Niagara, Bierstadt's Rocky Mountains, Moran's Grand Canyon of the Yellowstone, it might be worthwhile to consider the reasons why Hudson River School painters created so many smaller works. Who bought them? Why were they of interest? What sort of sensibility did they appeal to? Such an exhibition would serve the interests of the collector, scholars, and the public. But creating such an exhibition would require patience, industry, and humility, scholarly virtues entirely absent from O'Toole's Different Views.