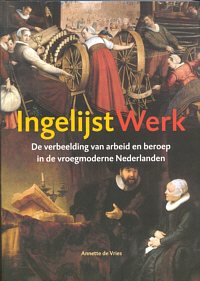 Almost everyone has to work for a living. Framed work: The representation of labour and profession in the early modern Netherlands is the trade edition of a dissertation on the representation of homo faber - working people - in the early modern Netherlands (1500-1700). This richly illustrated book contains case studies of six very different occupations: civil-law notary, clergyman, merchant/banker, shoemaker, docker and spinner. De Vries discusses these occupations in successive chapters, preceded by a general introduction and digressions into the three types of representation in which labour plays a role: biblical scenes, depictions of rural life and portrayals of city-dwellers. The visual motif of people at work was used in various countries from the late Middle Ages onward. But it reached the height of its popularity in the northern and southern Netherlands, where we find an unparalleled course of development in the period 1500-1700. De Vries convincingly argues that in the Netherlands both the variety and diffusion of this motif reached a unique level, or, as she puts it: "The systematic way in which early modern conceptions of human labour, occupations and occupational practice were given form in all sorts of representations, especially in the seventeenth-century Republic, is remarkable." (249) In the Golden Age, the Dutch Republic underwent a rapid economic transformation that drastically altered labour relations. In recent years, this topic has inspired much research in social history and cultural studies.

Not a single detail seems to have escaped the author's attention. De Vries must have spent an unbelievable amount of time going through countless representations and scrutinising them for her six chosen vocations. After performing this painstaking research, she examined the ideas about labour, occupations and occupational practice implicit in those representations. In analysing these visual materials, in which the motifs used are sometimes a matter of tradition, she consulted an array of written sources. This enabled her to draw conclusions about the individuals portrayed, conclusions in which the dominant themes are self-image, self-actualisation and other people's images of individuals. The most revealing representations turned out to be those that were not in keeping with established, everyday occupational practice.

In her discussion of the civil-law notary, De Vries meticulously describes the portraits and other representations of members of this profession, even mentioning a seventeenth-century gable stone. Her analysis of this material focuses on how the public image of the notary changed over time. Portraits ordered by notaries themselves always place them in a flattering light. In a portrait of 1625 by Cornelis de Vos, the sitter's attire and surroundings indicate his wealth, and the attributes on the table signify his profession.

Ministers of religion had a sensitive public position, more so than civil-law notaries. Representations of the clergy took on a confessional tinge, particularly in the years of religious reform. Portraits of ministers were made not just for the sitters' own homes, but also for other people. Various engraved portraits were in circulation.

Merchants and bankers were in practically the opposite situation from notaries. Careful analysis of visual materials shows that at first this group served mainly as a negative example. As the image about banking gradually changed, however, the providers of financial services received more and more respect, although avarice and stinginess remained subject to social censure.

There are not many known representations of actual individual shoemakers. Artists often depicted the shoemaker as an idealised craftsman, thereby establishing a collective occupational identity. When we turn to occupations on even lower ranks of the social ladder, it is clear that individual identity plays little or no part in how they are characterised. This applies to both dockers and spinners, the last two occupations discussed in the book. Dockers are small, insignificant background figures in painting; they are more prominent in applied arts, above all in objects produced for trade associations.

Finally, representations of spinners do not make any reference whatsoever to individuals, despite the many such representations in existence. In this wide range of materials, we do not find the stories of individual women, but only general ideas about work. Spinners, like shoemakers, were depicted as diligent labourers. The representation of their work, unlike that of more prestigious vocations, served not to reinforce their place in society, but to present a general form of social behaviour. The higher a particular occupation stood on the social ladder, the deeper the impact of its practitioners on the visual arts. The structure of group portraits of civil-law notaries and clergymen is in complete conformity with that of portraits of other high-status professions, such as scholars, medical practitioners, artists and goldsmiths. The turbulence of seventeenth-century art and the art market in the northern Netherlands presented artists with a profusion of possibilities for diverse kinds of portraits. It is not always easy to determine the profession of the person depicted; consider, for example, a portrait of the shipowner Daniël Bernard made by Bartholomeus van der Helst in 1669. Bernard is dressed in a very informal style; only the paper and writing implements signal that he is a merchant.

De Vries explains, in terms that are easy to follow, how certain concepts were incorporated (whether openly or surreptitiously) into the visual materials that she examines. Her analysis of these materials yields a more sophisticated alternative to the prevalent view that spinners should be viewed exclusively as dutiful housewives. Labour and diligence - generally seen as a remedy for all sorts of reprehensible social behaviour - were regarded as the antitheses of sloth. Depictions of hard-working spinners can therefore be interpreted as exhortations to lead an industrious life. Beginning in 1550, this line of thought seems to have attained remarkable prominence in Dutch visual arts (216, 225).

Some aspects of the study are also relevant to modern-day Dutch society, in which women's participation in the workforce is a political priority. De Vries reminds us that many merchants' wives aided their husbands in their occupations. Some women even worked to support their families, because their husbands had fallen ill and could no longer do so.

The study of the representation of the six occupations is exemplary. One might object to the selection of case studies, especially since one very salient occupation - that of artists - is not discussed. This is a perfectly understandable choice, however. The countless self-portraits and other representations in which artists figure would raise so many issues that a separate work would be required. In addition, this vocation has already formed the topic of major studies such as Raupp's. [1] Visual material on other groups is either fragmentary or entirely unavailable.

The publication is well produced and includes a brief but very helpful index of names and concepts. An English summary is provided at the back of the book for non-Dutch-speaking readers. The 200 illustrations, approximately half of which are in colour, form a valuable compendium of occupational images that played a critical role in the development and diffusion of the ideas discussed. This book is a major addition to previous literature on a subject that seems to be attracting keen interest at the present time. [2] For the interpretation of old-master paintings, drawings, prints and other objects that depict occupations, this study is indispensable.

[2] The following work deserves mention, in addition to those in De Vries's bibliography: Giles Waterfield: Below stairs: 400 years of servants' portraits, London, Edinburgh 2003.