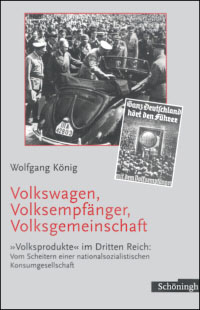 Wolfgang König's detailed examination of consumer goods in the 'Third Reich', or rather consumer goods that the Nazi regime explicitly endorsed, reflects the burgeoning interest in the history of German consumerism, especially that of Nazism. Although scholars have increasingly recognized the signs of an emergent consumer culture in the twenties and thirties, the racist and expansionist core of Nazi ideology has posed special problems of interpretation because of the regime's huge investment in rearmament, and because consumerism as a topic has seemed less relevant to probing the murderous essence of the 'Third Reich'. Aware of those concerns, König raises important questions: just how seriously did the regime respond to the popular attraction to consumer goods in light of the priority it placed on rearmament? Did it really attempt to meet consumer desires, or were the regime's promises to German consumers mere propaganda designed to maintain its popular support? What was the relationship between Nazi consumerism and the regime's goals? By focusing on range of regime-sponsored products, the radio (Volksempfänger), television, refrigerators, housing, the Volkswagen, and Kraft durch Freude tours, König argues that the Nazi regime produced its own distinctive brand of consumption, but one that succumbed to the illusions behind it, which ignored the impact of rearmament and low popular living standards. As an historian of technology, König challenges the assumptions in much recent scholarship on the 'Third Reich' as to the regime's putative "technological rationality" and its intentional or unintentional "modernization."

Sensitive to nascent popular desires for consumer goods arising in part from the interwar fascination with Fordism, the Nazi regime authorized industries to produce "Volk products" and services, starting with the cartelized radio and electronics manufacturers that produced inexpensive radios for wide distribution. At the same time, however, the regime's priority, war preparations, occupied center stage. Thus, Nazi consumer advocates demanded high quality goods, but at prices low enough to allow workers, whom the regime wanted win over to the Volksgemeinschaft, to purchase them without needing wage increases that would have jeopardized rearmament. The most determined instruments of Nazi policy, the Propaganda Ministry and the German Labor Front, pressed the regime's agenda with messianic fervor, imagining the rationalized mass production of goods that would outstrip that in the heartland of Fordist bounty, the United States. According to König, the illusions of the epigones of dictatorship, such as Joseph Goebbels and Robert Ley, grew stronger even when confronted with the complaints of ministerial experts and trade association spokesmen that politically mandated low prices did not cover costs, or recognize the lack of raw materials and other claims of rearmament. The mounting evidence that workers still could not afford even cheap radios, Volkswagen, or Kraft durch Freude tours prompted even more grandiose projects to remedy that problem, a good example being the huge KdF resort at Prora that promised working-class families a week's vacation for a mere twenty marks. The influence of party institutions grew more pronounced as the industries that produced (or would produce) Volk consumer goods sought to protect their bottom lines while chafing at restrictions against bringing out products that competed with the regime-sponsored versions. To wit: because auto manufacturers could not turn out a car for the regime's dream price of 990 marks, the DAF subsidized the Volkswagen project, hopeful that the gargantuan Wolfsburg plant, modeled on the Ford plant at River Rouge, would produce and sell in sufficient volume to offset prices insufficient to assure profitability. According to König, rather than evincing technological "rationality," Nazi consumerism clung to "faith" and "will" as the means of transcending insurmountable practical difficulties. As war approached, it alighted on the hope that Lebensraum would provide raw materials and labor, as well as a huge autarkic market purged of undesirables, who by virtue of their racial inferiority deserved neither prosperity nor (as in the case of Jews) life itself.

As the first to cover the range of Nazi-sponsored consumer products in one work, König convincingly demonstrates that the 'Third Reich's' consumer agenda never achieved its lofty expectations. Even the Volksempfänger and Kraft durch Freude tourism, arguably Nazism's most successful undertakings did not open middle-class practices and material goods to workers, who remained underrepresented as purchasers and participants. Officials, white collar workers, and other middle-class occupations constituted the most reliable buyers, or savers toward such big ticket items as the Volkswagen. The shortage of affordable housing persisted, while the new units that were constructed were too small to accommodate the "child-rich" families that the 'Third Reich' promoted. War forced the regime to promise more loudly a future of consumer bounty after Lebensraum was secured. Wage freezes and other discriminatory measures against consumption not sanctioned by the Nazi state ensured that popular living standards remained too low to allow working-class families little more than the necessities. König maintains, correctly in my view, that such terms as "technological rationality" or "modernization" fail to appreciate the specifically racist, anti-Semitic, and expansionist core of Nazi ideology and practice. High wages as a stimulant to mass consumption on the Fordist model was not an option, however "modern" the Nazi regime's fascination with consumer goods, or however fascinating the Nazi leadership found technology and mass production.

Nevertheless, was the Nazi "consumer society" really the "failure" that König believes it was? Despite his recognition of Nazism's distinctiveness, there is the hint of anachronism in König's title, as well as in his evaluation as to the accomplishments of the Nazi consumer agenda. Without denying that Nazi Germany lagged behind other Western European countries in the production and possession of consumer goods (König's statistics on radio ownership in Europe on page 84 is revealing to be sure), one could argue that a genuine "consumer society" - that is, a society in which scarcity was no longer the norm for the majority and where the semiotics of consumer goods provided social meaning and personal identity - did not exist anywhere outside the United States in the inter war period. Consumer desires were undeniably present during the Weimar Republic and under the 'Third Reich', yet it is debatable as to whether the term, "consumer society" should apply to the comparatively modest consumption of the first half of the twentieth century. Thus, the Nazi regime's "failure," although in the narrow sense true, discourages the author from fully appreciating the actual reception of its efforts. In fact, König's emphasis on the polycratic competition among industries, trade associations, state ministries, and party officials, although effective in illuminating the constraints that a private economy placed on the "primacy of politics" and not just the constraints of rearmament, causes him to downplay his evidence (230, for example) as to the popularity of the regime's consumer products and the anticipation of more goods in the future. Indeed, as I have discovered, Gestapo and SD surveillance reports of KdF tours and cruises, reveal an appreciation, even among workers, for how the 'Third Reich' had improved the lives of Germans. When the closest standard of comparison was the Weimar Republic, or in the case of many KdF tourists, the living conditions in southern Italy or Portugal visited by its cruise ships, the 'Third Reich' performed respectably - such that well into the postwar period, Germans retained positive memories of the thirties. In addition, the low living standards in Poland and Russia, which German troops observed during the war, exacerbated genocidal violence by deepening the contempt that Germans held for those they had conquered. If "illusory" in its ambition, the 'Third Reich's' limited accomplishments help to explain why it faced no serious domestic opposition.