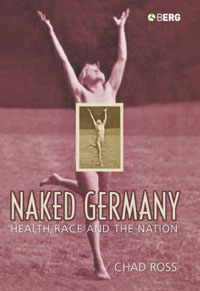 Scholarly interest in German nudism has increased markedly in recent years, not least because of the rise of Körpergeschichte as a sub-discipline in its own right. Even so, Chad Ross's reworked doctoral dissertation - supervised by Jonathan Sperber at the University of Missouri - is the first monograph on the subject to appear in the English language, and while it is unlikely to be the last word on the subject, it does provide an accessible introduction to a complex and fascinating aspect of German social and cultural history. Certainly, Ross is in no doubt about the importance of his subject: 'The history of nudism is at once the history of Germany in the twentieth century and the history of the body' (6), he claims.

The main text of the book is only 168 pages long, and is divided into seven thematic chapters, together with an introduction and epilogue. The introduction locates German nudism - referred to throughout as Nacktkultur rather than Freikörperkultur because it 'was the first term devised by nudists, and [...] best captures the ideas of the early ideology' (13) - in the context of late nineteenth- and early twentieth-century discourses on decadence and degeneration, or 'the Decline of the Germans' as Ross puts it (1). Chapter one offers a chronological overview of 'Nudism and Nudists', while chapter two looks at the moral and political campaigns against Nacktkultur by 'Pastors, Priests, Nazis and Police'. There follow short studies of 'Nudism and Medicine', 'The Healthy Body', and 'The Beautiful Body', before Ross turns to the key issues of gender and sex in his final two chapters. It must be stated at the outset that this thematic approach is both a strength and a weakness of the book. The decision to eschew the conventional chronology, and to treat the period from 1900 to 1950 as a continuum, is brave and - though it is often advanced as a desideratum - still quite innovative. 'The traditional historical turning points in German history, [are] nearly all taken from the world of high politics', Ross points out, whereas 'nudism not only survived a variety of very different regimes [...] but actually thrived under all three' (159). To support this approach, the author argues that 'Nudist ideology underwent little change in the first half of the twentieth century' (20). Yet he somewhat undermines his own position by asserting that 'three periods of growth can be discerned in pre-1945 nudism: the Independent Phase lasting from its likely origins in the 1890s to 1918, the Popular Phase from 1919 to 1933, and the State Phase from 1933 to 1945' (16). Are these not the very same dates from the world of high politics that he wished to move away from?

Although Ross is right to emphasize the continuity of nudist practice under a variety of political regimes, his desire to identify a single, coherent 'nudist ideology' is the book's major flaw. It leads to a lot of rather unfortunate synthesizing and blurring of naturist viewpoints, and the privileging of one strand within German nudism - the desire 'to purify the German race, by strengthening the viable and slowly weeding out the weak and those undesirable' (60) - over all others. Bizarrely, it also leads to the claim that 'Nudist ideology remained free of political ideology' (59). The problematic question of whether nudism can be considered an ideology at all is never addressed, even though Ross is forced to concede that the 'reality of nudism, especially how nudists behaved, organized and regarded each other was very different from what the ideology of nudism predicted' (32). Moreover, the author's tendency to take nudist rhetoric at face value undermines the credibility of his arguments. Nowhere is this more apparent than in his coverage of the prolific but cranky Richard Ungewitter (1868-1958), 'a man extreme in nearly all his views' (130). While it is true that Ungewitter was an important pioneer of nudism in the Wilhelmine era, he had become a marginal figure in German naturism by the early 1920s. Yet here he takes centre-stage, supplying the lion's share of 'nudist ideology' for the entire period of the study, often cited indirectly as 'one nudist' or 'one writer'. There is no doubt that Ungewitter is eminently quotable - membership of his Treubund für aufsteigendes Leben (1911), for instance, was barred to 'Baptized and unbaptized Hebrews, Slavs, Britons, members of the Mediterranean races, supporters of social democratic, left liberal and democratic ideas. Playboys, cosmopolitans, hedonists, confirmed bachelors, fashion victims, amazons, campaigners for women's rights and advocates of free love' [1] - but to see his extreme racial views as typical of German nudism as a whole is misleading.

The existing literature has tended to identify a number of separate strands within the movement during its most popular phase. As Ross puts it: 'In historiography it is common to assume three nudisms existed in the Weimar era [...] historians write of the "völkische Nacktkultur", the "proletariat [sic] Nacktkultur" and the "bürgerliche Nacktkultur" as separate and not necessarily related entities' (57). In Ross's view, however, to suggest 'that vast political or class divisions sharply divided nudism during the Weimar Republic would be both an exaggeration and a mischaracterization' (58). It is certainly justifiable to point out similarities between the strands, but to deny their existence altogether seems excessive. Ross appears not to recognize the important historical reasons which lay behind the division of the movement into separate organizations for the bürgerlich and proletarian milieus. This was surely one real difference which existed between German nudism and its counterparts elsewhere in Europe or North America. The author leaves us guessing, however, about what else was peculiarly German about Nacktkultur. While it would be unfair to criticise Ross for his particular focus on Germany, one might have expected at least some attempt to develop a comparative dimension: for all the emphasis on race and the nation, much of the 'nudist ideology' cited here will be familiar to students of naturist movements in other national contexts.

Although Ross makes passing reference to the German-language historiography, his book does not address the recent work of body historians such as Maren Möhring, whose Marmorleiber covers similar ground, albeit within a more strongly theoretical framework. [2] To be sure, the absence of theory here is not in itself a weakness. Indeed, general readers and students are likely to find Ross's account an altogether more enjoyable experience than Möhring's. It is a pity, therefore, that Ross has been poorly served by his copy editor. The book contains a large number of typographical and linguistic errors, which begin on the very first page. Ross claims that his initial inspiration came from reading Hans Fallada's novel Kleiner Mann, was nun? Unfortunately this is rendered as 'Kleiner man' (ix). On the same page Karlwilli Damm, the late founder of the Internationale FKK-Bibliothek in Baunatal - where Ross carried out much of his research - is referred to as 'Karwilli'. Other errors include 'Württemburg' (51, 79-80); 'Fallingsbostel' for Fallingbostel (51); 'Egestorff' for Egestorf (26, 27, 52); 'Volksmedezin' (79); 'Zielskisse' for Zielskizze (95, 222); and 'Herman' for Hermann Wilke (139). Nor is it confined to German names: Robert Gellately is referred to as 'Gelately' (182) and Maurice Parmalee as 'Parmlee' (218). One assumes, finally, that when Ross writes 'The importance of the classical civilizations of Rome and especially Greece in the development of modern Germany cannot be underestimated' (103), he in fact means the opposite!