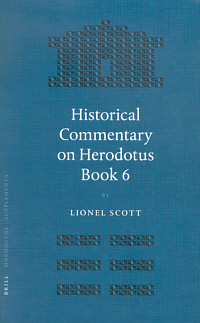 The commentary begins with a long introductory essay covering the author's aims, the life of Herodotus, Herodotus' sources and historical methods, the history of the Ionian revolt, and textual matters. The first section of the Introduction is titled "Reading Herodotus for the History", a title which at once signals the aims of the commentary and some of its limitations. By "history", Scott means what actually happened, not how the past was represented in later oral and written traditions. True to this aim, Scott provides judicious discussions of key historical questions such as the causes of the Ionian revolt, the aims of Mardonius' invasion of Greece, and the Athenian strategy at the Battle of Marathon. Relying on his experience as a lawyer in "dealing with evidential problems", Scott assesses the "factual basis" of Herodotus' narratives and arbitrates among modern scholarly opinions to provide clear and helpful assessments of the historical events in Book Six.

Yet, Scott shows very little interest in the "non-historical" features of Herodotus' text. For example, Scott tends to dismiss certain elements of Herodotus' narratives as folktale, and offers little in the way of analysis as to why these tales were meaningful to fifth-century Greeks. Scott's dismissal of folklore (sometimes as simply "charming" e.g., on 6.61.3) is understandable given his aim of uncovering the "factual basis" of Herodotus' narrative, but goes against the grain of much recent Herodotean scholarship. In the view of many contemporary students of Herodotus, the Histories are valuable not so much for reliable historical accounts of the past but rather as a source for fifth-century beliefs about the past, and hence the world-views, values and norms of Greeks of Herodotus' own time.

Scott rejects Fehling's accusations of deliberate invention, arguing instead that Book Six "basically represents the results of [Herodotus'] enquiries" (6). [1] After reviewing the scant evidence for Herodotus' use of written sources, Scott accepts the standard view that Herodotus' main sources were oral (16). Scott follows Oswyn Murray's distinction between moralizing Ionian traditions and mainland Greek political traditions (20). [2] In regard to this latter distinction, however, Nino Luraghi has recently argued that the connection between moralizing popular tradition and the East Greeks / Ionians is weakly founded and ought to be discarded. [3] Moralizing traditions can be found among stories set in or about mainland Greece and political traditions appear in stories deriving from the Eastern Greeks. It seems to me more sensible, moreover, not to create artificial distinctions between folktales and political traditions, since in many societies the two are not easily separable. Indeed, as James C.Scott has argued in his influential study of resistance among subordinate groups, folktale plays a crucial role in maintaining cohesion among subordinate groups and articulating resistance to dominant groups. [4] The figure of the trickster, for example, is both a popular feature of folklore traditions and frequently a symbol of political resistance since he outwits someone more powerful using cunning and guile. [5]

In regard to Herodotus' handling of his sources, Scott sensibly argues that we should not hold Herodotus up to modern standards of accuracy and emphasizes that for the oral culture of Herodotus' time, his omissions and inaccuracies would not have been apparent. Scott argues that Herodotus viewed his task as to report what others were saying, not to vouch for its accuracy. Scott suggests that diplomacy - for example, the desire not to embarrass friends from Ionia, or the desire to present Miltiades favorably - sometimes led Herodotus to profess neutrality about which version was correct or to omit certain unfavorable accounts (e.g, on the end of the Parian expedition) (24).

Scott is skeptical about the existence of intentional authorial narrative patterning as a mode of investing meaning into his history (25-26). Scott argues instead that apparent correspondences between episodes in the narrative are simply the natural result of describing similar events (e.g. the madness of Cambyses and Cleomenes) using the available conceptual and lexical tools: "It is no more than that when rulers behave irresponsibly, men tend to recall what they do in similar terms [...] there is no need to postulate imaginative additions to his material" (26). On the question of Herodotus' views of the Athenian democracy, Scott thinks that Herodotus is "neither pro nor anti, but disliked oppression and approved of fair government of whatever, complexion, even, perhaps, that of a tyrant" (28).

Some readers will dispute that Scott's interpretative stance leaves us with a far too passive model of Herodotus, a mere reporter of oral traditions, rather than a keenly astute narrator who shaped oral materials in telling ways through narrative patterning, thematic echoes and careful choice of words. For example, it is hard to agree with Scott that it is a matter of "taste" whether one reads Herodotus' report of Cleisthenes of Sicyon's politics at 5.67-8 "as approval of patriotic and firm rule or disapproval of arbitrary power" (30 n.96). Our understanding of Cleisthenes' attempt to meddle with heroic cults is not only influenced by other narratives concerning leaders who showed too little respect for the divine (Croesus, Cambyses, Polycrates) but is explicitly shaped in the narrative by Herodotus' choice to quote the verdict of the Delphic oracle on Cleisthenes: Cleisthenes was "a mere stone-thrower" or "fit to be stoned" (depending on whose translation you accept, see Ogdon 1993, cited by Scott). [6] While one might agree on a general level that we should be careful about attributing intentionality to every similarity between passages in the Histories, it is also misguided to suggest that Herodotus is simply recording what his sources told him.

The Introduction is followed by the Commentary proper. Since it is impossible to review every point made in the commentary, I will instead make some general points about the strengths and weaknesses of the commentary, citing representative examples.

On the plus side, Scott is a very reliable reference tool for geography, dates, and genealogies of the leading figures in the Histories. On geographical questions, in particular, one gets the impression that Scott has personally tracked down even some of the most obscure sites mentioned in Herodotus' text (see e.g., page 288 on 6.74 on the location of Nonacris in Arcadia, where Cleomenes conspired with the Arcadians against Sparta after he had fled into exile; Scott notes that "even today it [Nonacris] is at least 2 hours from a moterable track").

On the major historical questions relating to Book Six, Scott is also a reliable guide. At times, however, one feels that Scott goes to unnecessary lengths to find "factual" history in Herodotus' narratives. Commenting on the story of the epiphany of Pan to Pheidippides, for example, Scott provides a detailed medical explanation relating physical exertion to hallucination (369). It seems much more plausible, and indeed simpler, to assume that the story is invented as an explanation for the foundation of a cult of Pan (an argument that Scott rejects; 370). Similarly, Scott seems to believe that on the eve of the Battle of Marathon, Hippias really did dream that he slept with his mother and really did lose his teeth after a sneezing fit (6.107). Rather than seeing these tales as a familiar form of popular story-telling - where the outcome of events is indicated in advance through portents and omens - Scott seeks a natural explanation: "shrinking of the gums with consequent loosening of the teeth is a common feature of aging." (373). This fact may be true, and may inform the story, but it does not imply that the story is historical.