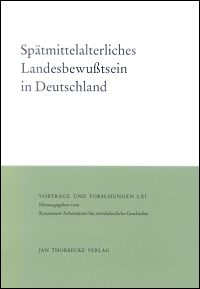 "The nation is dead, long live the region", wrote Hans Mommsen. Regions, as more than one contributor to this volume observes, are currently enjoying a historiographical vogue, sustained in part by a perception that (in Bernd Schneidmüller's words) "national frames of reference are partially dissolving" in today's Europe. But the eight substantial papers published here (along with shorter introductory and concluding essays by Werner and Schneidmüller), the fruits of a meeting of the Konstanzer Arbeitskreis held in 2000, are concerned with a specific kind of "region": the late medieval (primarily German) Land. Enno Bünz examines the historiography and historical meanings of 'Land' itself while Johannes Helmrath surveys the place of regional studies and notions of regionality within humanist historiography in Germany and elsewhere. Jean-Marie Moeglin examines political identities in a region lying mainly outside the medieval 'Reich', the county of Flanders. The remaining pieces are all substantial monographic studies of the role of 'Land' in the political culture and mentalities of five (broadly) "German" regions during the later Middle Ages: the Alemannic south-west (Dieter Mertens), the eastern Habsburg lands (Winfried Stelzer), the western borderlands of the 'Reich' (Frank G. Hirschmann), Westphalia (Peter Johannek), and Silesia (Andreas Rüther). The range and depth of coverage within individual essays, the variety of regions examined, and the stature of the contributors all help to make this in every sense a major volume, and a landmark in its field. A remarkable breadth and authority of coverage characterises almost all these pieces. Mertens, for example, provides a thorough, source-based survey of Swabian self-consciousness which, although focused on the fourteenth and fifteenth centuries, ranges from the early Middle Ages to the early modern period. But if one aspect of the volume's importance is signalled by the distinguished contributions which it assembles, another lies in the pioneering character of its chosen theme.

Associated particularly with the name of Otto Brunner, 'Land' has been a key concept among Germanophone medievalists for many decades past and, particularly since 1945, the study of regional political communities in Germany ('Landesgeschichte') an urgent preoccupation. It therefore comes as something of a shock to be reminded (by Bünz) that the complex medieval meanings of 'Land' itself have yet to be fully studied. Still more startling is the realisation which quickly dawns on the reader that medieval people's own consciousness of belonging to a 'Land', and the sentiments and modes of behaviour to which that gave rise, have up till now attracted even less scholarly attention. The place of 'Land' in the modern historiography of the German Middle Ages has thus been ambivalent: dominant yet, on the whole, strangely unexamined. The relative neglect, up till now, of "consciousness of Land" is especially surprising. German medievalists have, after all, scarcely been laggards in the study of political consciousness, particularly that of their own people. It was German scholars who, in the nineteenth and early twentieth centuries, did much of the pioneering work on medieval national identities. So why did they, and those who came after, not find more to say about consciousness of 'Land'? The answer clearly lies in large part with the German political imperatives of the day. What, therefore, should the reader make of the new focus, embodied here? For if the spectral presence of 'Land' - of political diversity, and thus the old bogey of "particularlism" - haunted earlier accounts of German nation-making, the phantom of nation shimmers, mostly unremarked, behind these studies of medieval sense of 'Land'. Now, as before, silences speak as eloquently as words.

German historical exceptionalism and the character of the medieval nation (particularly the medieval German "nation") itself are the two elephants crowding this particular room. From time to time, their presence is duly acknowledged, particularly by Schneidmüller, in his thoughtful valedictory stock-taking. Mostly, however, they tend to loom over these essays without quite being faced square-on. Just how distinctively German was the 'Land' as a form of self-consciousness, the reader is repeatedly led to wonder. The volume acknowledges that such a question can only be answered through non-German comparisons, and one such comparator-study is indeed included: Moeglin's piece on Flanders. Unsurprisingly, this presents a picture of similarities, rather than contrasts, with developments in the lands to the east. But this will not quite suffice for comparative purposes, since Flanders resembled closely other western borderlands of the German-speaking world, in its economic and cultural formations and in the sophisticated, localised character of its political life. An examination of realms more remote, geographically and constitutionally, from the northern territories of the 'Reich' would reveal, in many cases, a picture altogether less comparable with the political mentalities of the German 'Land'. Late medieval England, for example, or the greater part of France, could show little which resembles the regionalised historiographies, origin myths, communities of law, or entrenched notions of distinctiveness repeatedly and eloquently attested here. In one sense, of course, such reservations are unfair: no single volume could hope both to do justice to Germany's own rich variety of medieval regional identities and offer a truly comparative picture of political mentalities across Europe. Yet the historical distinctiveness, in European perspective, of what medieval vernacular sources - invoking a "national" whole - habitually termed "the German lands", remains a nagging problem. If no history of German self-consciousness can any longer choose to ignore the regions, neither, surely, can a study of regional identities pass in silence over that larger, if often indistinct, "German" political community within, through, and against which medieval conceptions of 'Land' were constructed.

Closely related is the question of nation itself - still a "hot" topic among medievalists, however marginal might (or might not) prove to be its relevance to Europe's future course. If medieval people were capable of "national consciousness" (and the current medievalist consensus is firmly that they were), in what sense did 'Land' represent a different form of consciousness? Was there a meaningful difference? Again, the question is raised by Schneidmüller, but otherwise tends rather to hover, unvoiced, around these essays. Certainly, the untutored eye would often be hard pressed to discern a difference. In 1338 the Habsburg duke Albert II confirmed to the Carinthians their customary laws in order that they "might be one people". For Werner Rolevinck, the Westphalians constituted a single historical 'gens' or 'populus'. A 'Land' might be ascribed not just a common history but a mythologised founder-figure, as was Flanders. Champions of a 'Land' might justify its people's well-deserved privileges with reference to the mighty deeds of their forebears: the Swabians based their claim to the first place in battle on the service done to Charlemagne by his Swabian kinsman Gerold. All too often, they had recourse to collective stereotypes, to heap glory on their own people or to deride neighbours and rivals. The presence about the prince of "foreigners" was denounced just as vigorously in early Habsburg Austria as in "national" kingdoms like England or Bohemia. These essays examine, among other things, the importance for 'Land'-consciousness of law and custom, institutions of government, common culture and language - all elements which also claim a central place in the study of medieval 'national' consciousness.

The difficulty here lies in part with that slippery term "nation" which, through its inescapable links with ideas of "state" and with large, modern political communities, can foster an unduly narrow approach to medieval views of ethnicity, community and power. But 'Land' has its own characteristic field of meanings, ranging from self-conscious, territorially-rooted political communities (as were Austria and Styria) via less cohesive but nevertheless "imagined" historical landscapes (Westphalia, for example), to mere geographical regions (such as "the Netherlands"), with little imaginative hold over their inhabitants. Late medieval Silesia was, in contemporary judgement, home to two distinct 'naciones'. 'Land' therefore poses its own thorny problems for the student of collective identities - as is here repeatedly made plain.

But if large questions remain, there is nevertheless no doubting either the timeliness or the seminal importance of these essays. This is a volume which breaks new ground, and which will quickly become a key point of reference for the further studies which are sure to follow.