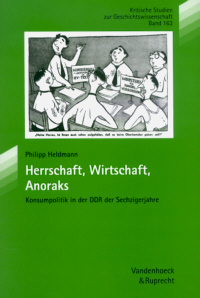 There was a joke, so I have been told, that East German economic planners used to tell about themselves. Two rabbits are running through the forest. One asks, "Why are we running so fast?" The other one says, "Don't ask, just run!" "Why?" "Because the State Planning Commission has come to the forest!" "So what? Let them come." "No, no! They'll come and cut off our fifth leg!" "But we don't have five legs." "True, but first they cut, then they count." In his monograph, Philipp Heldmann seeks to revise the traditional view of economic planners as all-powerful yet incompetent. The problem for planners, Heldmann argues, was not so much that they cut first and counted later, but that they lost track of the rabbits they were chasing in the institutional forest and ideological undergrowth characteristic of the "command economy." To demonstrate how limited their power to control economic behavior was, Heldmann takes an imaginative route, guiding the reader through the thicket of constraints on the process of planning for production and consumption during the tumultuous 1960s in the German Democratic Republic. The result is a highly specialized work that draws on detailed descriptions of negotiations between planners and politicians to offer novel and often controversial interpretations of economic policy under East German strongman Walter Ulbricht.

The book is divided into three sections that are united in Heldmann's attempt to demonstrate the limits of the regime's control over the economy. After an introductory survey of the literature on economic planning and totalitarian control, Heldmann organizes his material in a manner that parallels the planners' own methods. Thus, the first chapter deals with "Perspektivplanung," or the State Planning Commission's (SPK) attempt to work out what the Politburo's economic policy meant for the East German economy for the medium term. The second chapter investigates "Jahresplanung", or the annual distribution of scarce resources to producers according to the Socialist Unity Party's (SED) political priorities, while the third chapter examines consumption, which was only indirectly shaped by the party's emphasis on production.

The virtue of this approach is that it allows Heldmann to showcase the institutional reasons for the regime's neglect of that most elusive of rabbits - the East German consumer - without slighting the SED's ideological and political preferences, which have received comparatively more attention from scholars. The most fascinating portions of the book, for example, depict the tribulations of the Sektor Lebenstandard at the SPK, which was charged with using the vast resources of the socialist state to influence consumption. The Sektor's relative lack of political power was overdetermined by a variety of factors, including the Marxist-Leninist emphasis on production, the absence of a viable alternative to western-style consumerism, the fact that "das Planungssystem bezog [...] Konsum nur am Rande mit ein" (35), the SPK's marginal influence over economic policy, and the surprisingly small number of planners and politicians who possessed economic expertise.

Heldmann's emphasis on the organizational landscape permits him to suggest not only that the economic reforms of the 1960s (the Neues Ökonomisches System and its successor the Ökonomisches System des Sozialismus) were more superficial than even their detractors have argued, but also to reorient the discussion of Ulbricht's economic policies towards the construction of the Berlin Wall. Whereas the systemic competition with West Germany had previously forced SED leaders to make some concessions to consumers, especially after the 1953 uprising, the Wall robbed East Germans of their most important political bargaining chip - the possibility that they might withhold their labor power and political support by fleeing to the West. By removing this option, Ulbricht was free to demand even greater investments in industry, which in turn meant even fewer resources dedicated to consumption. On this interpretation, Erich Honecker's ouster of Ulbricht in 1971 signaled less an end to Ulbricht's economic adventurism or a return to neo-Stalinist economic practices than the beginning of the SED's attempt to stabilize its power by improving the living standards of ordinary East Germans.

Approaching economic planning from the SPK's perspective, however, is not without significant drawbacks. Although Heldmann does an admirable job of depicting the SPK as a colossus charging through a forest of bureaucracy in search of its rabbits, he also replicates the very kinds of confusions his planners must have experienced. Perhaps most importantly, the book lacks a clear narrative thread that might bring its disparate preoccupations together in a coherent whole. Heldmann stops far too often, for example, to examine individual trees in the organizational wood without explaining their relevance. In particular, his discussions of price policy and product distribution meander without apparent purpose through a field of familiar arguments. At other points, Heldmann pulls interpretive rabbits out of his empirical hat - such as his otherwise interesting account of SPK chairman Erich Apel's suicide in 1965 - without relating them back to his interest in the limits of communist power or the vagaries of economic planning. Similarly, his objections to the theses of other scholars are often quite insightful, but just as frequently querulous in tone and insufficiently integrated into the book's overall argument. One could also quibble with his use of clothing as a stand-in for all consumer goods, his decision to base the analysis of the popular opinion solely on bureaucratic perceptions, his rather odd application of Weberian categories to describe the plan, or his use of "consent" to describe popular acquiescence to SED rule, a concept whose lack of analytic rigor only confuses the key issue of elite response to popular opinion in authoritarian regimes.

Despite these defects, however, the book makes a valuable contribution to the growing literature on the limits of state power in authoritarian regimes and offers an imaginative reconsideration of economic planning. Indeed, Heldmann's suggestive, if sometimes unconvincing, re-interpretation of the GDR during the 1960s should spark renewed discussion over Ulbricht's role as reformer. In any case, historians interested in the GDR and consumer policy should plan on reading it.