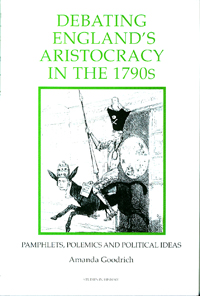 The trend within eighteenth-century historiography, in recent years, has been a move away from studies of élites and high politics and towards investigations of the middling and lower classes, of women, and of political culture more broadly defined. Amanda Goodrich's book resists this trend. Not only does it focus on high politics - on a pamphlet debate in which the participants were, as Goodrich acknowledges, predominantly educated white men - but the particular aspect of that debate with which she is concerned is the use and development by pamphleteers of the concept of aristocracy. Goodrich stresses that her interest is with the way in which aristocracy was understood and conceptualised within the pamphlet literature, rather than with offering a sociological study of the British upper classes. However, her book complements classic and more recent research into the development of the working and middle classes in Britain during the late eighteenth and early nineteenth centuries. [1]

While revolution did not erupt in Britain during the 1790s, many of the key issues arising from events across the Channel were debated in a pamphlet war that raged between 1789 and 1796. This was prompted not just by events in France, but also by Richard Price's Discourse on the Love of Our Country, and by Edmund Burke's response to Price and Thomas Paine's response to Burke. Hundreds of writers were inspired to contribute to what has become known as the French Revolution debate. Indeed, as many as six hundred pamphlets were published that contributed directly to that debate (4). Owing to her concern with representations of the aristocracy, Goodrich has focused on approximately five hundred pamphlets that have something to say on this issue. She divides her account in two ways - discussing radical and loyalist pamphlets separately and dealing in turn with the periods 1791-1792 and 1793-1796. Her justification for the chronological division is that 1793 marked the height of the debate, with external circumstances on both sides of the Channel prompting a decline in publications after that point.

Goodrich's first two chapters focus on the best known works to emerge out of the debate, Burke's Reflections on the Revolution in France and Paine's Rights of Man. It was these two writers, Goodrich insists, who brought aristocracy to the forefront of the debate. Moreover, she argues that their works were innovative in drawing a parallel between the English and French aristocracies, and in presenting late eighteenth-century English society as an ancien régime. Despite these similarities, Paine's attitude was, of course, diametrically opposed to that of Burke. Where Burke's aim was to condemn the French attacks on aristocracy, criticise similar threats in Britain and defend ancien régime societies on both sides of the Channel, Paine condemned both the French and the English aristocracies and called for their abolition. It was Paine's identification of the English aristocracy as an idle, parasitic élite, like the French, which was taken up by other radicals. Also important, in Goodrich's eyes, was Paine's account of English society as divided along class lines with the aristocracy on one side and the people on the other.

In Chapter Three Goodrich focuses on the loyalist responses to Paine, which appeared in the years 1791-1792. She challenges the conventional view of loyalism as 'a conservative defence of the church and state establishment and the social order' (85). While admitting that this did form one strand within loyalist discourse, Goodrich is keen to emphasise the emergence of another strand during this period. This new loyalism owed much to moderate Whiggism and presented British society as modern and commercial with an élite that was based on wealth, as well as birth and property, and was therefore at least in some sense open. Thus Goodrich argues that in 1791-1792 the loyalists defended the English aristocracy in both traditional and new terms. Moreover, she shows that contrary not just to Paine, but also to Burke, these loyalists emphasised the differences between the English and French aristocracies and used this to justify the idea that revolution was not necessary in Britain.

In Chapters Four and Five, Goodrich explores the radical and loyalist pamphlets produced during the period 1793-1796. In both cases, the content of the pamphlets was affected by several external factors. These included the execution of Louis XVI in January 1793, the outbreak of war between Britain and France in April of that year, and the Terror; as well as Pitt's attempts to control and suppress radicalism - not least through the Sedition Acts of 1795.

In the case of the radical literature, Goodrich suggests that these external factors made the pamphlets more reactive than proactive. Consequently, though the anti-aristocratic rhetoric remained strong, there was an even greater gap than in 1791-1792 between the radical rhetoric and the rather timid reform proposals that were offered. This chapter is perhaps the weakest in the book in that there is a lack of clarity in Goodrich's account of the comparison of the English and French aristocracies offered in these pamphlets. In some places she seems to suggest that the Painite model of England as an ancien régime similar to France remained in place: 'Consequently the Painite model of society of 'aristocracy and people' in an ancien régime remained dominant in radical writings'(120). Whereas elsewhere she appears to be arguing that it was no longer a common feature of radical pamphlets: 'It was no longer a question of condemning England and its aristocracy as an ancien régime, on a model similar to that of pre-revolutionary France, as Paine had done.' (113). Towards the end of this chapter Goodrich points to the emergence - particularly in the pamphlets of Thelwall and Paine - of an interest in capitalist relations in the workplace, which both echoed loyalist accounts and prefigured later ideas.

In her examination of the loyalist pamphlets of 1793-1796 Goodrich highlights the continuing synthesis between political conservatism and liberal commercialism, and the associated emphasis on Britain as a successful commercial power with an open élite. She also notes the deployment of this model in loyalist pamphlets aimed specifically at working people and designed to garner their support. It was through their adoption of the commercial model, Goodrich argues, and their success in appealing to a wider audience, that the loyalists effectively won the debate. Moreover, Goodrich suggests that in their emphasis on an open élite the loyalists removed the aristocracy from the central position accorded to it by Burke and Paine.

In her conclusion Goodrich summarises her argument and explores the legacy of the French Revolution debate. She notes that arguments and concepts developed by both sides in the period 1790-1796 appeared again in later debates such as that over taxation in 1797-1799 and that surrounding the Reform Bill in 1830-1832.

This is an interesting book, which undoubtedly adds a new dimension to our understanding of the French Revolution debate of the 1790s. And the account it provides is, for the most part, a convincing one. There are, though, a few weaknesses. There are places where Goodrich's knowledge of events in France seems limited. For example, on page 5 she claims that 'The French noblesse was stripped of its privileges and the order of aristocracy was effectively abolished by the French National Assembly on 4 August 1789', but she makes no mention of the abolition of titles of hereditary nobility the following year, which would perhaps have been more pertinent to her argument. Similarly in note 67 on page 150 Jacques-Pierre Brissot de Warville is described as Jacques-Pierre de Warville Brissot - a double error since Brissot was no longer using his full name by this point. Secondly, there is a fair amount of repetition within the book, as though Goodrich feels she has to keep reminding her readers of her central argument. Given that the argument is clearly stated, this is unnecessary. Finally, Goodrich could perhaps have been bolder in discussing the implications of her argument. She could, for instance, have said more about how the loyalist discourse she has identified helps to explain the absence of revolution in Britain during this period. She could also have explored how the particular conception of aristocracy that developed during the pamphlet debate may have influenced and fitted with the emergence around the same time of the notion of both a middle and a working class.