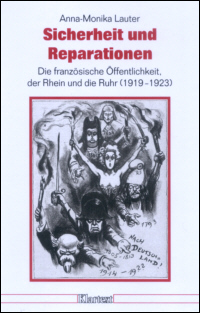 The Rhineland question was central to Franco-German relations between 1918 and 1925. With neither side willing to accept the Versailles settlement as the final word in post-war affairs, a struggle ensued to achieve pre-eminence in Germany's western borderlands or, as some in Paris would have it, France's eastern marches. However, as Anna-Monika Lauter observes, the history of the Rhineland occupation in general has been relatively neglected by German historians, whilst the role of public opinion within France has never been comprehensively investigated. In Sicherheit und Reparationen Lauter undertakes to make good this neglect, providing us with a meticulously researched and detailed analysis of the fractured and complex processes through which public opinion and politics interacted with one another.

The basic divide between right-wing pressure groups and the supporters of the Bloc national government on the one hand, and left wing associations and political parties on the other is well known to historians of the period. The right perceived the general thrust of policy on the Rhine and Ruhr positively and optimistically, whereas the left was more critical from the outset. At stake were two fundamentally opposed views of post-war Germany, for whilst the right regarded Germany as irreclaimably malign and displayed little or no interest for the major changes wrought by the Revolution (particularly in Prussia) the left believed it essential to give the supporters of Weimar a chance. This demanded of the French government far greater moderation than it was ever prepared to show.

If this is familiar enough, Lauter's forensic investigation of the different ways in which officialdom acted on public opinion and conversely of how public opinion impacted on official decision-making provides valuable new insights into post-war Franco-German relations. Central to the official media campaign was Paul Tirard, the French High Commissioner in the Rhineland, who devised a policy of pénétration pacifique in the Rhenish territories through which they would be brought into cultural and economic proximity to France. To this end Tirard was anxious to develop new economic contacts between France and the Rhineland and to maximise the French personal and cultural presence in western Germany. He strove to mobilise French public opinion behind these bold initiatives through his own press office in Paris and through direct and effective control of the Havas news agency in the Rhineland itself.

However, as Lauter demonstrates, Tirard's strategy was undermined by a fundamental paradox, for the policy of pénétration pacifique so contradicted the spirit of the Versailles Settlement that its existence had to remain a well-guarded secret. It was a policy that dared not speak its name, thus reducing Tirard to promoting it indirectly and often disingenuously. As a result the High Commission's efforts to promote economic contacts, such as through French patronage of Rhenish spa resorts, were met with incredulity and open hostility from France's own spa towns and their local newspapers. Meanwhile, public opinion and the press in the devastated regions of northern and north-eastern France were angered by French public expenditure in the Rhineland when reconstruction at home surely deserved priority. Tirard was able to tap into a conviction within right-wing leagues and pressure groups, such as the Comité de la Rive Gauche du Rhin, or among individuals such as the historian Louis Madelin or the publicist Maurice Barrès, that France shared a related historical identity with the Rhineland. However, most ordinary French citizens hardly cared and tended to regard the Rhinelanders as Boches rather than long-lost brothers. Meanwhile the left-wing media dismissed efforts to prise the Rhineland away from Germany as provocative and deeply counter-productive. Even the annexation of Alsace without a plebiscite had elicited some doubts on the left.

While Tirard was struggling to woo the Rhineland, conservative members of the French military establishment fumed over the inadequacies of the peace settlement. Lauter reconstructs the vigorous efforts by these elements of the military to demand a permanent military frontier on and beyond the Rhine, while former generals who supported parties of the left (an intriguing concept for any German contemporary) dismissed the strategy as provocative and militarily outdated. Contemporary politicians also debated outside parliament, whether in the press or through major public speeches, as they clashed over the terms of the peace settlement and thereafter over the key issues of France's future security and the reparations question. Clemenceau and Tardieu defended the treaty and the Rhineland agreements as the best obtainable, whereas Poincaré and Briand, among others, lamented the emptiness of security guarantees offered to France by its British and American allies. In the run-up to the Ruhr occupation Poincaré manipulated the media with considerable skill as he confronted widespread public resistance to conscription and military adventurism. The French public was generally happy to see their tricouleur flutter over Wiesbaden, Mainz and Trier, but was averse to any further military sacrifice. For this reason, it appears, Poincaré stressed the allegedly limited objectives of the Ruhr adventure - a simple police action to obtain reparations - rather than elaborating on his more far-reaching objectives. Equally significant was the total media silence on the policy of épuration (ethnic cleansing) which saw a third of the population in the Moselle and Alsace expelled or dragooned across the German border in the months and years following the armistice, before comparable if less extensive measures were initiated on the Rhine and then the Ruhr. As the Ruhr occupation slid rapidly into stalemate and crisis the left-wing media subjected the Bloc national government to a barrage of withering criticism.

Although some of this is relatively familiar, Lauter's exhaustive study does provide her readers with a much fuller understanding of French policy formation and of the relationship between France's warring political factions and their public. In particular Lauter demonstrates how important elements of France's post-war policy were pursued in spite of, rather than in response to, the popular mood. If the left consistently rejected the whole tenor of the conservative governments' strategies, even the right afforded Rhenish and wider foreign policy differing receptions from region to region and from issue to issue. Perhaps the deeper tragedy of all this, Lauter argues, was French and German mutual incomprehension and elemental fear of one another in the aftermath of the war, for its economic and financial legacy was common to everyday political life on both sides of the border. Moreover, there were powerful interests aplenty in both countries that sought a more conciliatory and imaginative settlement than was actually achieved. It would take the mutually destructive Ruhr crisis finally to bring about an internationally brokered, mutually accommodating agreement - too late it might be argued to survive the traumas and challenges of the Great Depression.