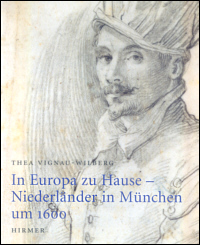 Recent years have brought about renewed interest in late sixteenth-century art of Northern Europe. The study of German art especially, has long suffered from the perception that Reformation iconoclasm and the functional disruption of confessional conflict created a sort of artistic dead zone during the second half of the century. The evidence for a late international mannerism in southern Germany has all but disappeared, literally painted over by the rhetorical grandeur of seventeenth-century Baroque Europe.

Preparatory drawings and reproductive prints often serve as the archeological potsherds that hint at a vast body of work lost not only to the violence and dispersal of the Thirty Years War, but also to changing styles and tastes. This exhibition, mounted by the Staatliche Graphische Sammlung München under the direction of Thea Vignau-Wilberg, brings together an array of drawings and prints, along with a smaller number of paintings and objects that reveals an incredibly rich artistic culture at the Bavarian court of Duke Wilhelm V (1548-1626, reigned 1579-1597).

During the last decades of the sixteenth century, Munich became a vibrant crossroads for northern artists traveling to Italy and Italian artists lured north by court commissions. Although heavily influenced by Florence and Venice, Netherlandish artists, many trained in Italy, who arrived to work for Wilhelm starting in the late 1560's developed a distinct style that shows Bavarian court art not merely emulating, but interacting with and influencing the course of an international style in which Prague, Graz and Innsbruck are just as important as Florence, Rome, and Venice.

The materials of the exhibition are divided geographically according to the buildings that housed the now mostly lost programs and objects. The castle of Trausnitz in Landshut, to the northeast of Munich, was the first of many large scale projects that provided foreign artists with ducal patronage. The drawings provide the key to understanding the overall program of once richly decorated rooms at Trausnitz. Vignau-Wilberg recreates the castle decorations within the context of courtly art both north and south of the Alps, clarifying many issues of content and meaning in the process.

When Wilhelm ascended to rulership in 1579, he brought his court artists from Landshut to Munich. The result was a period of conflict and integration with the local German artists who still worked in strictly organized guilds. The foreign artists, protected from local rules by their direct ties to the court, introduced a new style, as well as a new concept of the artist as an independent and creative force. Wilhelm had his team of Italians and Netherlanders decorate the Antiquarium, a library turned banquet hall, and he built the Grottenhof, a garden courtyard that reflects direct knowledge of the Boboli garden grotto in Florence.

Relying mostly on drawings, but also on pre-World War II photographs and closely read archival materials, Vignau-Wilberg makes the Ovidian cycle of paintings in the Grottenhof coherent again. The invaluable groundwork laid out by Brigitte Volk-Knüttel in the Corpus der Barocken Deckenmalerei in Deutschland. Profanbauten. (Volume III, Part II, editors Hermann Bauer and Rupprecht Bernhard, Munich 1989) provides the skeletal structure for any such study, but much remains yet to be explored in terms of meaning and function.

The construction and decoration of St. Michael's Church, the first Jesuit church north of the Alps, was Wilhelm's religious, and financial, legacy to his fiscally troubled state before his abdication in 1597. Friedrich Sustris, Wilhelm's court artist and artistic director, emerges as the architect of this major counter-reformation monument. The vast background literature on the church is succinctly summed up in several catalogue entries that give much credit to Sustris. Indeed, his presence is felt throughout much of the catalogue in works both attributed to him and in copies of his work by his many collaborators and workshop assistants.

The last sections are devoted to the ecclesiastical and secular treasuries and devotional and programmatic prints. From painstaking nature studies by the miniaturist Joris Hoefnagel, to the prints of Hendrick Goltzius, whose extravagant engraving Wedding of Cupid and Psyche was just as vital a visual source as any southern painted cycle, the commissions in Munich represent a rich confluence of subject matter and style that range from the naer et leven to the elegant artifice of Goltzian mannerism.

The very breadth of the material covered means that there are occasional lapses. While the catalogue seeks to provide dual texts in English and German, there is no corresponding English text for the explanation of the bronze fountain of the Grottenhof and no introduction at all to the section on the treasuries. Not all questions of attribution are satisfactorily settled, if they ever can be. The workshop practices under court artist Sustris were designed to provide a coherent style for the court and so the issue of originals, copies, and copies of copies will be debated for a long time. The reliance on previous pronouncements and the inherent difficulty of attribution is evident in catalogue entries such as Sustris' Putti with Shields (C18), which resembles the "copy after" (C19) far more closely than it does the autograph Two Putti with Garlands (C20).

A similarly unsatisfactory attribution emerges with two paintings in the exhibition, the diptych with Circumcision and Presentation in the Temple (D20-21). The Presentation is clearly a somewhat clumsy painting in the style of Sustris, created as a companion panel to the autograph Circumcision. In an age when Dürer's works were being painstakingly copied and Goltzius produced his "Meisterstücke" emulating the style of older masters, this diptych by two different hands in the same style provides an intriguing opportunity look at prevalent artistic theory and practice.

Despite the fact that much of the exhibited material is graphic, it implies a wealth of media, from small luxury objects, to wall paintings, panel paintings, print series and architecture that the imported artists produced. The many prints engraved under ducal patronage allowed for a connection between the luxury objects of the aristocratic patron and their reproduction for a broader public. Bringing these materials together in the format of a graphic exhibition goes a long way in recreating the splendor of the late sixteenth century Bavarian court. Not only are we led to consider the works in terms of their own meaning, but we can also consider the spectrum of audiences who interacted with them as spiritual instruments or as aesthetic objects. It is perhaps the theoretical diversity of Vignau-Wilberg's approach that is most rewarding. In addition to providing an impressive array of material, Thea Vignau-Wilberg and her collaborators in this exhibition have opened yet another door to understanding a complex and fragmented period in art history.