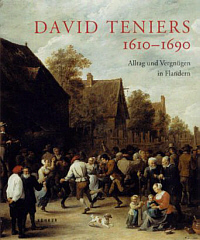 Produced to accompany the exhibition of the same name that was on view at the Staatliche Kunsthalle Karlsruhe from November 5, 2005 until February 19, 2006, "David Teniers der Jüngere, 1610-1690: Alltag und Vergnügen in Flandern" highlights the work of one of the leading Flemish painters of the generation after Rubens. The exhibition brought together 97 works by Teniers (74 paintings and 23 drawings), 16 pictures representing the pictorial traditions from which the authors argue Teniers's art developed, and 34 works documenting Teniers's influence on his contemporaries and followers. The exhibition, the first ever devoted to Teniers in Germany, and the catalogue are the products of the collaboration between Dietmar Lüdke, the curator at the Kunsthalle, and Margret Klinge, an independent art historian who is the world's leading expert on the artist. Klinge had previously curated "Adriaen Brouwer and David Teniers the Younger" in 1982 at the Noortman and Brod Gallery in Maastricht and "David Teniers de jonge" in 1991 at the Koninklijk Museum voor Schone Kunsten in Antwerp.

As it has become common practice, the catalogue operates as a monograph on the artist addressing themes raised by the exhibition rather than as a gallery guide. Following a detailed chronology of Teniers's life are seven essays on his art. First, Lüdke traces the long history of collecting Teniers's paintings in Karlsruhe that ultimately laid the foundation for the exhibition. Much of the essay focuses on the aristocratic Baden-Baden and Baden-Durlach collections in the eighteenth century and illuminates the intense appeal of seventeenth-century Flemish painting to these German courts. Horst Vey, former director of the Kunsthalle and a prominent authority on seventeenth-century Flemish art, also addresses the collecting of Teniers's paintings. Taking the tone and style of a personal memoir, Vey tracks the ownership of a picture by Teniers from Caroline Louise von Baden to the present and recounts his efforts to bring it back to Karlsruhe. Jessica Mack-Audrick examines prints made after Teniers's paintings during the artist's lifetime and through to the end of the eighteenth century. From these prints, Mack-Audrick argues that Teniers's art was widely popular from the Netherlands to France in the seventeenth and eighteenth centuries. Together, these three essays illuminate the impact and legacy of Teniers's paintings on numerable audiences throughout Europe long after they were created, a subject not previously explored.

Klinge's essay is the conceptual heart of a second group of essays that examine the artistic traditions from which Teniers's art developed and their appeal to aristocratic collectors in his own lifetime. She studies how Teniers's genre scenes initially derive from earlier Netherlandish and Flemish satirical representations of peasants, especially those of Bruegel and Brouwer, but later in his career idealize the commoners he had previously lampooned. Klinge explores this shift in relation to a 1647 letter by Archduke Leopold William to whom Teniers was court painter in Brussels from the 1650s until the artist's death in 1690 that describes Teniers's imagery as "paueren histori". Those who have read Allison Kettering's 1983 book "The Dutch Arcadia: Pastoral Art and Its Audience in the Golden Age" will find convincing Klinge's linkage of Leopold William's "paueren histori" to an increasing courtly interest in the idea of the pastoral where rusticity and the countryside, including those who inhabit it, were romanticized. Klinge's exploration of how Teniers utilized observation and open air sketches to picture this new attitude contributes to contemporary understanding of how naturalism developed in early modernity alongside changing responses to the natural world.

The remaining three essays similarly posit that Teniers's naturalistic paintings were based on issues and themes far more complex than a simple transcription of reality. In his study of the representation of music and musicians in Teniers's art, Marcus Dekiert argues for a complex, informed iconography of the type that justifies the court patronage that the painter enjoyed in Brussels. Building off his dissertation on the representation of music in early modern northern European art, Dekiert identifies how Teniers carefully pictured musicians and / or their instruments to imbue his scenes with negative connotations by drawing upon representations of such themes as the prodigal son and "devil's music." For example, Dekiert explores how rustic instruments such as the bagpipes one frequently finds in Teniers's peasant scenes were considered crude because they made jarring tones. Though Klinge's arguments for a later idealization of the peasantry by Teniers and his patrons seem to be at odds with Dekiert's reading of the artist's lower class figures as being marked as negative, Astrid Reuter supports Klinge by exploring the idea of the pastoral, and its classical roots, in the idyllic countryside that appears in thirty-three paintings by Teniers. Lüdke's essay on the artist's still-life elements locates Teniers's stylistically varied experiments in this area to his position as curator of Leopold William's art collection in Brussels. Lüdke notes how Teniers responded to diverse trends in contemporary still life painting, particularly of the types collected by the archduke. As with Klinge, Dekiert, and Reuter, Lüdke positions Teniers's naturalistic renderings staged in the present in relation to the aristocratic milieu within which he operated.

The bulk of the remainder of the catalogue consists of full entries on each of the works in the exhibition. The entries are divided into eight sections: "Early Work and Contemporaries. Antwerp 1632-1640"; "Maturity. Antwerp 1640-1650"; "Drawings. Antwerp and Brussels"; "Teniers as Court Painter. Brussels 1651-1659"; "Late Work. Brussels 1660-1680"; "Prints"; and "Tapestries." The catalogue concludes with biographies of the predecessors who the authors cite as influences on Teniers and the followers who were in turn influenced by the painter. The authors identify only Flemish painters as possible sources for Teniers. Several of the later individual entries, however, address contemporary Dutch artists. Dutch painters could have been invoked even more frequently as, for example, cat. 101 recalls Adriaen van de Venne's grisaille paintings, and several of Teniers's still lifes clearly derive from those of Claesz. and Heda. In light of Brouwer's engagement with Dutch art that resulted from his stay in the northern Netherlands in the late 1620s and Lüdke's arguments for a wide awareness of European art as a result of Teniers's position as curator of Leopold William's collection, it seems that the artist likely responded to more than the art produced in his local environment.

Missing from the catalogue is consideration of humor in Teniers's paintings. The authors frequently raise the issue of satire, but one fails to find mention of the recent studies of the comic in early modern northern European art, like those by Mariët Westermann. [1] These analyses of the humanistic elements of comic painting would have strengthened the authors' positions on the sophistication of Teniers's genre scenes.

Throughout the catalogue the authors focus the reader's attention on what Teniers painted with little discussion of how he painted. Most notably, the catalogue lacks a technical study of his methods and manner. Readers would have benefited from learning how Teniers worked and, perhaps, how his technique related to those of painters such as Brouwer. Likewise, only Reuter's essay on landscapes raises even briefly the issue of touch and handling. As she notes, in the eighteenth-century Joshua Reynolds lauded Teniers for his brilliant touch and his technical mastery. One is left to wonder if seventeenth-century audiences would have responded similarly, especially sophisticated clients like Leopold William who were avid connoisseurs of paintings.

Despite the above omissions, Lüdke and Klinge's catalogue possesses considerable value. The lavish illustrations form a much needed image bank of Teniers's accomplishments, and seventeenth-century Flemish genre painting. The text furthers our understanding of one of the leading, if often neglected, painters of the period by continuing to place him within the context of his time. As Klinge was one of the co-editors of the volume, the catalogue follows her earlier studies of the artist, but also updates them by devoting greater attention to the sophistication of his imagery and the history of collecting his works.

[1] Mariët Westermann: The Amusements of Jan Steen: Comic Painting in the Seventeenth Century, Waanders 1997; Mariët Westermann: Jan Miense Molenaer in the Comic Mode, in: Dennis P. Weller (ed.): Jan Miense Molenaer: Painter of the Dutch Golden Age, Exhib. Cat., North Carolina Museum of Art, Raleigh 2002/03, 43-62. Walter Gibson's Pieter Bruegel and the Art of Laughter, University of California Press, 2006 appeared in press too recently to have been considered in the Karlsruhe catalogue, but might prove useful to subsequent scholarship on Teniers.