Katherine Marie Kuenzli: The Nabis and Intimate Modernism. Painting and the Decorative at the Fin-de-Siècle, Aldershot: Ashgate 2010 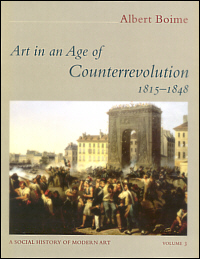 Optical metaphors come to mind in describing the effect of reading Albert Boime's latest volume in his series, "A Social History of Modern Art". The reader zooms out to survey the art of European and American artists in light of Boime's sense of Zeitgeist; his thesis about the "age of counterrevolution" facilitates new alignments of the material. At the same time, particular artists and events are thrust under Boime's microscope to reveal a staggering level of detail: his admirable discussion of "Raft of the 'Medusa'", for instance, extends past twenty pages; "Liberty Leading the People" occupies thirty-three.

Like its predecessors, this book would appear to have two main audiences: the students in a survey course and the professors who teach them. Yet appearances, as always, can be deceiving. Once the reader has gotten a taste of the riches contained within this volume, she or he might well decide that there is simply too much detail for students in a survey course. Yet this would be a pity on many levels. One could argue that it is precisely students in a course on nineteenth-century art who should be asked to read something whose sheer voluminousness approaches the productions of the nineteenth century, even if its pace is resolutely twenty-first century. Over 700 pages of text and notes cover a 33-year period in history, with significant treatments of French, German, English, and Spanish Romantic art; photography and landscape in France and England; American art and naturalism; and the transition in England from Romanticism to Realism. Boime rethinks the entire map of Restoration Europe, and gives shape to the visual culture around the Revolution of 1830 and the July Monarchy. A mere excerpt from the book on an old standby of the survey course such as Daumier's "Rue Transnonain, 15 avril 1834", would give today's students a truly vivid sense of the politics and the violence of the represented events. In many ways, Boime is at his best when he can discuss a work like this one; he can tell a story of social injustice with real conviction.

Boime's passion for his material makes itself felt throughout the book in a number of ways. The very rewarding section on Turner provides some telling examples. One tendency that many readers will find striking - and that might overwhelm a student looking for a quick bit of reference material - is the emphatic precision with which Boime pinpoints (or perhaps buttonholes) a given figure's political allegiances. Here is one such instance: "[Turner's "The Slave Ship"] represented the cultural encoding of one strain of Evangelical (Low Church) Toryism, with a subtext voicing outrage against the materialism of unbridled laissez-faire economic ideals" (575). Granted, by that point in the book, the reader should be adequately equipped in nineteenth-century political and religious allegiances to follow this, but it will strike the reader trying to use this as a reference work as highly specialized. In one part of the Turner section, Boime's classificatory zeal does not interfere with an argument that what the artist might have been trying to express could not be easily summarized by a political or religious affiliation: he characterizes Turner's late work by claiming that "what it lost in clarity, it gained in effect of vertiginous uncertainty suited to the tempo of change Turner experienced in the emerging machine age" (569). I, for one, find it especially important in dealing with Romanticism that the author make room for what could be a forced aloofness or feigned disinterestedness - if not disingenuousness - at the heart of the Romantic stance or sensibility. That Boime at times admits this even amidst his own desire for clarity is refreshing. His attempt to read socio-political statements in complex works of art, however, can intrude too much on interpretation. For instance, Boime documents the coming of the Great Western Railway, and the fact that third-class compartments were wagons open to the weather. In his discussion of Turner's "Rain, Steam, and Speed", then, Boime suggests that "Turner wanted his audience to empathize with poorer passengers forced to endure the agonies of inadequate facilities" (597). It is hard to imagine that Turner's painting in any way addresses the audience of the third-class carriage, even if it transmits a powerful atmospheric experience to the viewer. Its aspiration to transcendence would in fact seem to obliterate the upper-class viewer's possible imagining of the hardships of vast numbers of people.

If Boime suggests a populist - and tendentious - reading of "Rain, Steam, and Speed", he is nevertheless alive to William Henry Fox Talbot's deliberate avoidance of social realities such as hayrick-burning in the countryside. Boime provides a nuanced account of the intertwined inventions of photography and the surge of landscape painting at mid-century. Talbot's early images of "Lacock Abbey evoke a harmonious image, life on an English country estate, and it was for this ideal that he invented his version of photography", writes Boime (436). This is where Boime's movement between art and context can pay off by revealing a representation whose ideological work is accomplished through gaps and absences.

Despite the book's investment in the socio-political, Boime also gives himself room to expound upon biographical material that is often fascinating and integral to the social context he sketches, but that can also verge on the gratuitous. It may be surprising in a book of this kind to read of "Delacroix's foot fetish", (357) or that "[Théodore] Rousseau felt attraction only to a female totally subservient to him", (502) or to read that the dead working man in Daumier's "Rue Transnonain" has an erection (331). Perhaps one of the more unexpected - and even bizarre - bits of psychosexual speculation falls in the section on Corot. We read that while Corot was painting the Roman countryside, he was "getting off on the hallowed ruins behind the bushes" (472). Lest one think that this represents some sort of lapse in the copyediting, the author then analyzes a letter in which Corot refers to a need "to calm the ardor that devours me", a phrase Boime parses with "an onanistic interpretation" (480). It seems to me that the notion of Corot's possible masturbatory activities behind the Coliseum does little, if anything, to enlighten our knowledge of Corot's art and his context.

"Art in an Age of Counterrevolution" is so much more comprehensive than any other survey text that it would be difficult to quibble with its inclusions. We read, for instance, of David d'Angers' commission for the Panthéon, Emile Signol's prizewinning entry in the Prix de Rome competition in 1830, Pierre-Numa Bassaget's lithographic erotica, and so many works in all media that broaden the base of discussion of art in this period. Boime also does much more than synthesize the work of dozens of scholars in a typical textbook fashion; his own work on, for instance, the slave trade in relation to the work of Géricault and Turner vastly enlarges the scope of the research that supports the book's narrative. Boime also favors going directly to primary sources whenever possible. This means that the book lends itself well to methodological analysis by graduate students, yet it cannot be considered a guide to the secondary literature.

Like its predecessors, "Art in an Age of Revolution, 1750-1800" and "Art in an Age of Bonapartism, 1800-1815" [1], this book is rich, idiosyncratic, and unparalleled in the literature on nineteenth-century art. In no other single book can one read in such depth of Delacroix's strolls through Moroccan ghettos, the same-sex ideals of the Nazarene community, and Ford Madox Brown's medievalism in the context of the Oxford movement. For this reason, it is a book to be appreciated not only in terms of the field's expanding boundaries, but also in terms of the debates and allegiances that it brings back to life for a general reader as well as for specialists. The illustrations are black-and-white; most are not large, but they serve adequately as references for the narrative, especially as Boime frequently discusses wood engravings and academic paintings that cannot be found in the typical survey text. A book that offers this much new research belongs on every scholar's shelf.