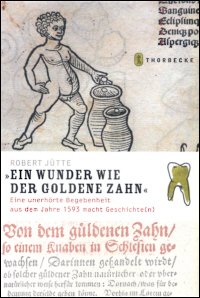 In this short book, aimed at a general audience, the medical historian Robert Jütte follows the strange story of a Silesian wonder from its origins down to today. In 1593, in Silesian Weigelsdorf (in the Eulengebirge, near Lampersdorf), a seven-year-old boy was discovered, one of whose milk-teeth (a lower left molar) had apparently been replaced by a golden one. The case aroused intense interest as various experts tried to determine if the gold was real, if the tooth was natural, preternatural, or miraculous, and what such a wonder might mean. The most important of these investigators was Prof. Jakob Horst of the Helmstedt medical faculty, who examined the boy in 1594 and published a lengthy account in 1595. [1] According to Horst, the tooth appeared firmly fixed in the boy's jaw, and repeated tests with a touchstone seemed to prove that it was indeed gold (not so fine as Hungarian gold, but gold all the same).

Despite initial doubts on the part of a few, these tests seemed to leave only one question: was this a miracle or could a golden tooth have grown naturally? As Jütte makes clear, many scholars then held that such unusual occurrences might nonetheless be the result of natural processes. Alchemical researchers were understandably quick to agree. As news of the tooth-wonder spread, however, skeptics were quick to deny that human beings or animals could produce golden parts, and Duncan Liddel, a medical colleague at Helmstedt, even blasted Horst's research methods as "ineptae & absurdae" (49).

For a few years, however, important questions surrounded the meaning of the golden tooth. A rich tapestry of biblical and classical prophecies seemed to suggest that the tooth was a message from God pointing to a new golden age, and specifically to a forthcoming victory over the Turks, whose armies were seriously threatening Eastern and Central Europe in the 1590s and provoking widespread anxiety. Some thought that like a golden molar, the imperial armies of Rudolf II would crush this latest Turkish threat. Amidst the flood of pamphlets, songs, and broadsides announcing prodigies, monsters, wonders, and miracles, many readers must have found such apocalyptic interpretations compelling. Excitedly, Prof. Martin Crusius of Tübingen even drew out the promise of the golden tooth for the campaign of Prince Sigismund ("Sieges-Mund") Báthory.

Unfortunately, over time the golden tooth changed form and color, and by 1596 it was evident that what had at first seemed a natural growth was in fact a finely-wrought prosthesis, an early instance of a gold (or brass) dental crown, a thin metal layer fitted over the boy's natural tooth. For the history of dentistry this invention is of some importance, and it has been recognized as such in the specialized histories of dentistry. In 1596, however, it seemed more like a fraud than a therapeutic intervention. It was the French dental technician, Claude Mouton, who first adapted the invention for modern dentistry in 1746.

Surprisingly, the story of the miraculous tooth did not die in 1596, and Jütte has been amazingly diligent in vacuuming up an extraordinary pile of later references to the Silesian wonder. By the late seventeenth century they story no longer illustrated God's plans but rather the gullibility of ordinary people and the need to treat all reports of wonders and miracles with skepticism. By the nineteenth century the story was being recorded and imperfectly remembered as one of the "historical legends" of Silesia, and the tale has reverberated all the way down to the end of the twentieth century, when a new series of strange dental miracles have been widely reported from all over the world. Even Holocaust deniers in France have picked up the 1593 Silesian miracle as proof of how carefully one must cross-examine conventionally accepted evidence.

Despite the book's many merits, I was disappointed that Jütte does so little to advance our understanding of the important distinction between preternatural and miraculous phenomena ("miranda" versus "miracula"), the topic on which Katherine Park and Lorraine Daston have recently shed so much light. And although he knows well that reports of such wonders were commonplace in the late sixteenth century, Jütte does not add much to our understanding of this popular genre. The publisher, moreover, should be ashamed to have presented several of the illustrations in so small a format that their texts cannot be read without a strong magnifying glass.

Still, Jütte does a good job of moving swiftly and efficiently through the surprisingly numerous accounts of the Silesian boy and his amazing tooth. Along the way Jütte pauses usefully to reflect upon the means by which strange events become credible to readers and how these means have changed over the centuries. He helps us to understand how physicians and scholars in the 1590s might have had good reasons to suppose that this wonder was both natural (or preternatural) and meaningful. In these reflections he hits upon a theme that Ian Maclean of Oxford University has also exploited in recent years in papers dealing with this very case.

Although as an historian Jütte withholds judgment from these early modern scholarly efforts to find an apocalyptic meaning in strange events, he drops this stance and expresses his disgust at the most recent miracle-mongers (whom he labels "Glaubensfanatiker", 113) and at the sophistries of Holocaust denial. But his shift in tone does not really mar the value of a book that serves as an introduction to a strange advance in dentistry and as a popular survey of the long life of a wonder tale. This book deserves a wide readership.