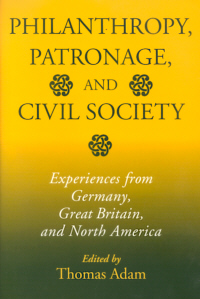 There are many good things about this collection of essays edited by Thomas Adam and brought out as part of the University of Indiana's Philanthropic and Nonprofit Studies series. Discussing the differences and similarities in philanthropy and patronage between Germany, Great Britain, Canada and the United States, these essays attempt to broaden the focus of philanthropic studies and complement scholarship concerning a distinct aspect of public life in these four societies. Springing from a conference held at the University of Toronto in May of 2001, this genesis is one of the book's strengths as this collection of essays presents the reader with a fascinating and varied buffet of debates and explorations, raising important questions and widening debates. Is philanthropic activity an integral element of embourgoisement? Did nineteenth-century German society involve the same flavour of philanthropic endeavour as did American or British society or did Germany have its own philanthropic Sonderweg? Was there, in fact, a genuine transatlantic exchange of philanthropic models or a lasting influence of one society upon another? However, in many ways, the buffet often fails to take the reader beyond the hors d'œuvre course, raising these interesting and often novel questions only to deal with them too briefly to be fulfilling.

The assortment of essays is singular in its remarkable diversity. The subjects covered range from Maria Benjamin Baader's discussion of the reorientation of German Jewish philanthropy from the religious to the secular between 1750 and 1870 to Brett Fairbairn's comparison of the drivers behind the emergence of the cooperative movement in Britain, Canada, Germany and the United States from the mid-nineteenth to the mid-twentieth centuries. Divided into three thematic sections in a generally successful attempt to impose structure on what could easily be an unwieldy and disparate compilation, this collection examines "Philanthropy in a Transatlantic world", "Between Market and State: Philanthropy and Social Elites" and "Jewish Philanthropy and Embourgoisement". Only occasionally does this grouping give the impression of stretching or shoe-horning.

These groupings are not arbitrary; this book explicitly seeks to address several strands of current historical debate. For one, by examining similarities and differences between, on the one shore, British and German approaches to philanthropy and, on the other, tacks taken by Canadian and American philanthropists, this collection of case studies endeavours to show that, contrary to certain previously held assumptions concerning the development of nineteenth German society, private philanthropy was not precluded and pre-empted by state dominance in cultural and social welfare and that the German Bürgertum (just as its counterparts in Canada, the United States and Britain) was actively involved and invested in local philanthropic activity. Philanthropy, Patronage and Civil Society also aims to build on Daniel Rodgers' work concerning the resonance of transatlantic traffic, Atlantic Crossings. This book thus fixes itself firmly within both discussions concerning philanthropy and its contributions to the shape of British, Canadian, American and German societies both during the long nineteenth and well into the twentieth centuries as well as within current debates about the transatlantic exchange of ideas.

Many of the essays are directly comparative. Tobias Brinkmann, for example, discusses the importance of philanthropy to the progress of Jewish assimilation in both the United States and in Germany during the nineteenth-century. Karsten Borgmann and Thomas Adam each compare the philanthropic practices of the urban elites of Germany with those of the United States (Adam concentrating on Boston and New York in contrast with Leipzig, while Borgmann focuses on Berlin in comparison to the same two American cities). Brett Fairbairn goes for the grand-slam, comparing the development of the cooperative movement in all of the four featured countries: Canada, Germany, Britain and the United States, stressing the connections between traditional notions of philanthropy and cooperative self-help over the contentious aspects of that relationship. Some contributions, however, choose only to grapple with their own specific focus. Susannah Morris, for example, offers a thoughtful examination of nineteenth-century social housing projects in London demonstrating that the defining waters between self-help, philanthropy and state involvement were, in the late nineteenth century Britain, remarkably muddy. Similarly, David Hammack looks at philanthropy in seven different American cities examining the role of both public and private gifts in shaping and controlling American nonprofit organizations.

Several essays emphasize the similarities in philanthropic schemes and priorities. Margaret Menninger's discussion of the bourgeois elite's control of the Leipzig Gewandhaus through the Konzertdirektion shows the importance of bourgeois involvement in cultural philanthropy - a model similar to that present in Britain, Canada and the United States. Similarly, Eckhardt Fuchs and Dieter Hoffmann argue that German scientific research institutions were (just as in the United States) financed by both private and state support. Others draw attention to the idiosyncratic aspects of a society's philanthropic tradition. David Hammack's discussion of elite philanthropy in American cities highlights the unique development of American urban philanthropy, dependent as it was on both significant gifts from private donors and the often less-noted involvement of federal, state and municipal agencies. Similarly, Karsten Borgmann argues that the significant authority given the museum director of Berlin's Kaiser Friedrich Museum was special and a uniquely German approach to museum management which, Borgmann observes, prevented divisive quarrels between new and old elites in their patronly endeavours and thus created a philanthropic "glue" for society. What Borgmann fails to note is that it was equally possible that this special management structure (which obviated the need for a Board of Directors) actually served to reduce not only the power of but, more importantly, internal contacts between art patrons, thereby limiting philanthropy's salutary effects as the "glue" of society, an effect most harshly felt by Berlin's Jewish cultural philanthropists during the rise of the National Socialists.

Despite the many interesting queries raised and explored by this book, however, the main weakness of this collection is that these essays have not grown as much from their embryonic states as conference papers as one would have liked. Many still ring bluntly in the ear and do not read flowingly. Perhaps, had the emphasis been placed on greater depth and development rather than attempting to range over broader ground, the result might have been more substantive. Fewer contributions, more fully developed, perhaps more specifically clustered chronologically or with respect to subject, might have succeeded in addressing more completely those interesting questions raised at the book's outset. However, notwithstanding the fact that, in many ways, this book's reach exceeds its grasp, this collection of essays contributes helpfully to our understanding of philanthropy and the development of middle-class public life on both sides of the Atlantic. Almost more importantly though, this volume of essays continues a growing interest in comparative history, giving us new ways of understanding how different cultures chose to structure their societies. In this sense, the comparative study of philanthropic endeavours in four such disparate countries can only be valuable since, as Thomas Adam pointedly and astutely observes in his introduction, "philanthropy always has something to do with power and the shaping of future society".