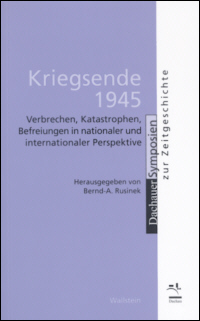 Over the past decade historians have given an increasing amount of attention to the circumstances surrounding the end of World War II in Germany and Europe. In contrast to the earlier focus on May 1945 and the notion of a "Stunde Null", however, more recent research has focused on the process and consequences of the disintegration of Nazi rule and the societal impact of total war. This collection of articles, edited by Bernd-A. Rusinek under the sponsorship of the Dachauer Symposium zur Zeitgeschichte, essentially seeks to delineate the basic elements of this emerging research on societies and states at the end of the Second World War. Given such a wide-ranging goal, it is hardly surprising that the resulting essays vary widely in both choice of topics and quality. Despite this variety, a few commonalities do emerge: in the first two sections of the book, the contributors tend to focus on the sufferings of the civilian populations, whether as a result of the terror inherent in the Nazi system, the increasing chaos at the end of the war, the destructive logic of the Allied bombing of German cities, or the desire for revenge on the part of the occupied peoples. In the final section, emphasis is put on the memory of the event, of myth-making and denial, and of varying perceptions of victimhood. Taken together, this collection of essays emphasizes the trauma, destruction, and serious loss of life at the end of World War II. Although the crimes, catastrophes, and liberations of the subtitle alter in meaning according to one's perspective, all peoples and societies in Europe were affected in some way or another by the great events of the war and war's end.

For many readers, perhaps, nothing will so neatly summarize the trilogy of crime, catastrophe, and liberation as Gabriele Hammermann's account of the end of the war in Dachau. Writing from the perspective of victims, perpetrators, bystanders, and liberators, she demonstrates that for each group the overrunning of the concentration camp by American forces in late April 1945 definitively marked the end of Nazi rule, and thus of the war. Although brief, her treatment of the final two groups, the civilian population of Dachau and the American GI's and military government authorities, hints at the complexity of their postwar relationship. As the original American aims of punishment and democratic re-education gave way to pragmatic considerations of efficient governance, local residents were able to construct three myths: they knew nothing of the crimes at the local camp; they themselves were victims of NS oppression; and they had, in their own way, offered resistance to NS rule (39, 44-45). Largely forgotten, of course, were the victims and perpetrators, those who had suffered and those who had meted out the brutality so endemic to the Nazi regime.

Terror and violence also marked the final phase of the war for German soldiers and civilians, foreign workers, and Allied troops in both the west and east, as Ralf Blank and Heinrich Schwendemann, respectively, clearly demonstrate. Any notion that the winding down of the war meant a reduction in misery, suffering, and death is clearly incorrect. If anything, the final months of the war produced staggeringly high body counts, as total German and Soviet casualties between January and May 1945 easily topped the two million mark (126). For Blank, though, the final stage of the war actually began in the autumn of 1944, as the Anglo-American air forces intensified their bomber offensive over the Rhine and Ruhr industrial areas. Although an effort to disrupt the German war economy, the western allies, according to Blank, both expanded the terror and brutality of total war, and produced unintended consequences for those foreigners working in the Ruhr. In addition to massive bomber raids over the large industrial cities of the Rhine and Ruhr, allied bombers now began to pulverize smaller towns. Indeed, the horrible logic of total war was such that, running out of purely military targets, allied tactical fighter-bombers now strafed virtually anything on the ground that moved, from street cars to herds of cows. As Blank notes, the traumatic impact of these experiences on the formation of postwar mentalities, especially the construction of various myths and legends, has hardly been researched (103). For foreign forced laborers, the bombings meant not only increased danger from above, but from below as well, as the Gestapo, fearing a loss of control over the "Ostarbeiter", unleashed a wave of bureaucratically organized terror, one that grew in intensity with the approach of allied forces (107-108). A similar escalation of violence, directed largely at German civilians, also characterized the last months of the war in the east. The deaths of hundreds of thousands of German civilians as a result of panicked flight from the Red Army or as a result of forced expulsion is, of course, both a well-known and controversial story today. Certainly, many people fled, were forced from their homes, or were killed in the closing months of the war as a result of revenge on the part of Soviet soldiers or occupied peoples. Others, however, fell victim largely because Nazi Party officials failed to make or execute adequate preparations for an orderly withdrawal, or as the result of a conscious decision on the part of the regime to give the military preference over the civilian population in matters of transportation (134, 137-140).

In the second section, which emphasizes an international perspective, Jiri Pesek and Wolfgang Schwentker note that little substantive research or critical analysis has been done on the events of the end of the war in their respective countries by Czech or Japanese historians. Instead, enduring myths arose in both nations that obscured a realistic look at the events of war's end, that of the resistance (or communist liberation) in Czechoslovakia and of their own victimization in Japan. This omission is particularly acute, since the authors tend to see 1945 as a caesura in the historical development of both nations. By contrast, Gjalt Zondergeld, in his intriguing essay on the Netherlands, illustrates that despite massive research and volumes of books on the subject of the end of the war, recent interpretations by Dutch historians have claimed not 1945 but the 1960's as the real break with the past. Zondergeld attempts to synthesize both claims: he notes that 1945 did mark the end of the centuries-old Jewish culture in Holland, that the traditional Dutch policy of neutrality ceased, and that the process of decolonization began. On the other hand, despite these clear signs of a break with the past, for the Dutch the war continued beyond 1945: in the Dutch East Indies, in the struggle to come to terms with the occupation period, and in persistent economic and housing problems. For Zondergeld, then, 1945 both was and was not a historical caesura for The Netherlands.

In the final section, then, provocative essays by Karola Fings and Klaus Naumann address the issues of myth-making and the process of coming to terms with 1945 in Germany. Fings, in her study of Cologne, shows how easily legends are created and how persistently they hang on. With Konrad Adenauer and Joseph Frings actively promoting a postwar Catholic renaissance, local residents quickly took shelter in a comforting myth of dual victimization: by the regime since Cologne had never voted in large numbers for the Nazis and by the Allies because of the continuous heavy bombings of the city. The inconvenient fact that little to no resistance had been offered against Nazi rule, and that scant notice had been taken of the deportation of local Jewish residents (and their housing used as compensation for other bombed-out residents), was drowned in a mood of local patriotism (224). In local collective memory, then, residents of Cologne, even otherwise critical thinkers such as Heinrich Böll, clung to murky local legends of 1945 for decades after war's end. Klaus Naumann is also concerned with memory and the construction of a collective identity, but on a national level. Using the recent popular film "Das Wunder von Bern" as the centerpiece of his discussion, Naumann asserts that the catastrophic consequences of defeat, the trauma of occupation, and the social-psychological difficulties of integrating the Spätheimkehrer serve merely as a backdrop to the real theme of the movie: the key postwar year was not 1945 but 1954, and the key character is not the Spätheimkehrer but the nine year old boy (born, significantly enough, in the year of defeat). The reconciliation process within a family thus stands as a microcosm for the larger reconciliation within German society. More provocatively, Naumann claims that the interplay of themes within the film such as suffering and victory, sickness and healing, and bitterness and reconciliation are rooted not in a sense of German guilt for the war, but rather in the pain of overcoming the shame and humiliation of defeat, occupation, denazification, and re-education. Although Naumann does not necessarily see this German self-reconciliation as a step toward a national identity as victims, he is aware, as Michael Geyer has noted, that defeat remains a sensitive topic, one that causes pain long after the wounds have healed (243).

As is perhaps typical of a collection of symposium essays, one often wishes for more detail and specificity in some of the individual contributions. It would also have been helpful to have included a combined bibliography of the works cited, as well as a list of abbreviations for the various archives cited in the endnotes of individual essays. Taken together, however, the articles presented here do nicely illustrate recent historiographical trends, as well as emphasize that the end of the war has a variety of meanings depending on one's personal and national perspective.