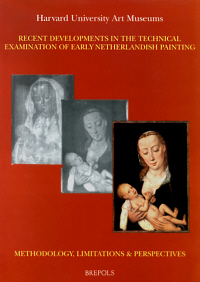 In editing the papers of the symposium held at the Harvard University Art Museums on November 2, 1996, the authors have produced a valuable reference book, including nine contributions by twelve authors. Topics range from recent development in research methods, investigative equipment and techniques, to the latest in imaging technology. One paper is devoted to the long neglected history of technical studies, other contributions are more classic "case studies". Another article reflects on the results of investigations and on the issues involved. Most authors have contributed significantly to the field in the last decades. Some were the initiators of the research method they discuss in their essay. Their reflections on the issues are therefore important state-of-the-art contributions.

1. In the first essay: Technical Studies of Early Netherlandish Painting: A Critical Overview of Recent Developments, Molly Faries offers a comprehensive and thorough overview of the activities in the field of technical studies on early Netherlandish painting in the last two or three decades. She highlights significant findings by leading institutions and scholars and provides extensive bibliographic references. The author has conceived her introduction as a commentary accompanying the different papers, helping to bridge the gap between examination and interpretation of the results. She first stresses the importance of the quite new discipline of historiography of technical studies. She further explains how by the 1970s and 1980s infrared reflectography and dendrochronology emerged as productive investigative tools. Recent uses of X-ray include measuring annual growth rings of a panel; future development can be expected from portable X-Ray units that will allow to use X-radiography as a scanning technique. The development in materials analysis of the paint stage is also discussed. Earlier methods (micro-chemistry and staining techniques) have given way to new ones that do not destroy the sample: cross-sections can now be submitted to scanning electron microscopy (SEM) with energy dispersive X-ray analysis (EDX) or energy dispersive spectroscopy (EDS). Combined techniques of gaschromatography and mass spectroscopy (GC-MS) for the analysis of the medium led to adjustments of earlier opinions; the pioneering work in this field done by the London National Gallery's researchers is rightly acknowledged. Promising methods of cross-section and medium analysis, such as imaging sims, are in development. Pigment analyses have resulted in new information on certain mixtures and paint-layer structures. Our understanding on prices and manufacturing process of pigments has improved. Finally, dendrochronology and infrared reflectography are discussed at length. Faries emphasizes the function of the underdrawing, the copying routines, the use of models, and the technology of the workshop. Her richly documented essay reflects the experience of a very active practitioner and is therefore an important contribution.

2. Ron Spronk: Standing on the Shoulder of Giants: The Early Years of Conservation and Technical Examination of Netherlandish Paintings at the Fogg Art Museum. The Fogg (renamed in 1966 Straus Center for Conservation and Technical Research) was the first American Museum to create an independent department for Conservation Research. From the start, four scientists paid attention to Netherlandish painting: Edward Forbes (1873-1969) studied resins and binding media, George L. Stout (1897-1978) and Rutherford Gettens (1900-1974) experimented on the collections; Allan Burroughs (1897-1965) X-rayed several hundreds of Netherlandish paintings. The four men have played a role far beyond their institution. R.J. Gettens' collaboration with P. Coremans in the 1950s was crucial for the further development of the Brussel Center. Forbes views on restoration ethics in matters of reversibility and visibility of the retouches remain actual half a century later. Burroughs' collection of 3.500 X-radiographs is still the most important of its kind in the world and many of Burroughs' views withstood 60 years of scholarship.

3. J.R.J. van Asperen de Boer: Slowly Towards Improved Infrared Reflectography Equipment. The author has been famous among generations of students and scholars for having developed the first video infrared reflectography (IRR) system in the 1970s, a Barnes Infrared Camera equipped with a PbS (lead sulphide) detector with peak responsitivity around two microns. He recently participated in the implementation of a PtSi (Platinum Silicide) digital camera. His first equipment remained the standard between 1975 and 1995. In 1991-1993, a new class of infrared detector systems became available: infrared focal plane arrays. Van Asperen de Boer compares the merits of different instruments now available.

4. Peter Klein: Dendrochronological Analyses of Netherlandish Paintings. One of the remarkable qualities of this scholar is his willingness to respond to demands of scholars in specific research programs, thus providing them with essential data. He contributed to Museum catalogues and monographic studies. He has built a huge database which allowed him to qualify some of his previous observations and estimation on missing sapwood ring and seasoning time. He has established an uninterrupted masterchronology for Baltic oak that covers the entire period of early Netherlandish painting (and beyond). New important findings emerged, as it became clear that a particular workshop sometimes used boards from the same tree. In controversial cases Klein's dendrochronology has made the difference. Peter Klein's latest datings are included in this essay.

5. Teri Hensick: The Fogg's Copy after a Lost Van Eyck: Conservation History, Recent Treatment, and Technical Examination of a Woman at her Toilet. The painting was long considered to be a 15th-century copy of a lost composition by Jan van Eyck. After retracing the history of conservation of this worn out painting, the author explains the results of a thorough investigation including IRR, RX pigment and medium analysis. Dendrochronology by Peter Klein settled the case: the painting has been executed after 1511. Pigment analysis reveals that it was made before 1750. This essay is an excellent contribution to the critique of copies.

6. Gianfranco Pocobene and Ron Spronck: The Fogg Art Museums' Virgin and Child from the Workshop of Dirk Bouts: Findings from Technical Examinations and Recent Conservation Treatment. Technical documents of this painting and of another Virgin and Child (Städelsches Kunstinstitut, Frankfurt am Main) (mainly X-rays and IRR documents) show similarities as well as differences. It is argued that the differences should be explained by the function of the composition, the Harvard version being one wing of a diptych, and that the pattern drawings were flipped over to produce reverse images. The conservation treatment is discussed in detail, and appropriately documented under ultraviolet light, showing the strictly limited retouchings. This article makes a technical examination preceding a conservation treatment in an exemplary way.

7. Melanie Gifford's essay: Interpreting Analyses of the Painting Medium: a Case Study of a pre-Eyckian Altarpiece, is much more than a simple case study, as the author deals with methods of investigation and interpretation of the results of medium analysis in historical perspective, including primarily microscopic examination of paint cross sections using biological stains, and instrumental techniques based on chromatography and mass spectrometry. Early results are compared with the author's data, showing that new instrumental methods lead to finer analysis and more correct interpretation. The use of several different analytical techniques confirms that the medium of the Altarpiece is not an emulsion but linseed-oil, with traces of pine resin that could originate from another layer. Pigments are also discussed, as well as the handling of the oil medium. The results are compared with recently published almost contemporary northern paintings.

8. Henry Lie: Digital Imaging for the Study of Paintings: Experiences at the Straus Center for Conservation. The author traces the history of infrared mosaicking, and explains his own experiences at the Straus Center. His procedures are beautifully illustrated and the physical means of acquisition of images are clearly explained. The author shares his experience with lead sulphide camera tubes and with the improved charge-coupled devices (CCDs). Lie experimented with close-up lenses allowing a field of view of 3 cm by 3 cm, with astonishing results. His use of a digital still camera for studio photography allowed him to produce crisp infrared images of the whole painting in a single shot, taking both infrared and daylight images using the appropriate filters. The author also has made radiograph composites and used various scanning devices. He explains his document layering techniques in Photoshop and in Unix Software. He finally deals with ethical concerns in the interpretation and in the preservation of the data. His applications of the computer in digital handling of infrared images and X-rays are pioneering and have a great potential.

9. Maryan Wynn Ainswoth: What's in a Name? The Question of Attribution in Early Netherlandish Painting, addresses the complicated issue of attribution strongly opened up in unexpected ways during the last decades. The author's thorough studies on Gerard David and Petrus Christus, amounted to build up a considerable body of information about artist's procedures, in an effort that generated entirely new questions. Did artists paint in other styles than their own, what about the master-pupil relationship, collaborative ventures, developing specialization, mass production for the open market or for export et cetera. An excellent example is given in David's workshop, where standardized central panels in retables could be done by an accomplished assistant, while the side panels, that may respond to particular requirements, could be more easily made by David himself. Technical examination may also lead to doubt signed and dated works, when selling art, made by apprentices, under the Master's name, possibly allowed better profit to the Master.

An illustrated glossary of the technical terms makes the volume accessible to a broad range of scholars, conservations professionals, scientists and students. The volume brings together the connoisseurship and experience of outstanding scholars and leading scientists. It will highly benefit to all working in the field of technical examination. It will be especially useful for scholars confronted with the difficulties of choosing the appropriate equipment and investigation technique, but also for those looking for a proper direction of research in the fast-moving and complex field of technical examination.