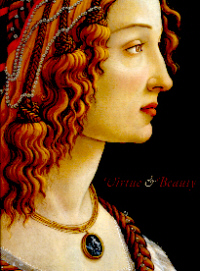 This handsome and generously illustrated volume was published to accompany the exhibition "Virtue and Beauty", curated by David Alan Brown and held at the National Gallery of Art in Washington between September 2001 and January 2002. The show brought together a small but fine group of Renaissance portraits of women (and a few of men), predominantly Florentine, with the occasional Flemish and Northern Italian interloper. While painting took pride of place, exhibits also included sculpture, medals and drawings, procured from a wide range of lenders.

The book is divided into two sections, the first a collection of five essays, the second a catalogue of the works in the show. Book and exhibition purport to present for the first time to a larger audience the phenomenon of the proliferation of female portraits in Florence and also shed light on the broader issues of women's freedom, responsibility and individuality during the period between c.1440 and c.1540.

Apparently, the exhibition set out to be a modest 'work in focus' around Leonardo da Vinci's "Ginevra de' Benci" in the National Gallery's collection, pivotal in the development of Renaissance female portraiture, and most recently examined in the exhibition curator's own monograph "Leonardo da Vinci. Origins of a Genius" (Yale University Press 1998). Accordingly, the inscription "Virtutem Forma Decorat" on the panel's reverse, which maybe translated as "Beauty Adorns Virtue", prompted the title of exhibition and accompanying book.

However, this focus is no longer particularly evident in the present volume, and while Leonardo's portrait may have been given pride of place in the exhibition, it is completely integrated into the essays of the book and set in a line of development which includes fine examples of works by Filippo Lippi, Botticelli, Verocchio, Ghirlandaiao, Pontormo and Bronzino.

The contributors of the book's essays have been chosen for their specialisation in the fields of Florentine Renaissance art and/or Renaissance women studies. David Alan Brown, Curator of Italian Renaissance Painting at the Washington National Gallery, introduces the concept of virtuous beauty in Renaissance Florence and the representation of virtue through the depiction of a beautiful woman. Brown's essay equally investigates the history of the study and of the collecting of these portraits, from Burckhardt's first deliberations in "The Civilisation of the Renaissance in Italy" of 1860 to Pope-Hennessy's "The Portrait in the Renaissance" of 1966, from Dante Gabriel Rossetti's purchase of Botticelli's "Woman at a Window" (now Victoria & Albert Museum, London) to the acquisitions of Wilhelm von Bode and Bernard Berenson and of American collectors. It finally introduces issues taken up in the following essays, trying to place the portraits in question between aesthetically pleasing object, embodiment of virtue and social historical document, the latter having been rediscovered and re-assessed by feminist art historians over the past twenty-five years.

Dale Kent, professor of art history at the University of California and author of the recent "Cosimo de' Medici and the Florentine Renaissance" (Yale University Press 2000), elaborates on the social and cultural roles of women in the Renaissance. Kent's discussion is as wide-ranging as it is concise, providing a succinct summary of research and guidance to related issues in the extensive notes. In the absence of a general bibliography at the end of the book, Kent's as well as Brown's notes at the end of their respective essays supply useful and comprehensive references to topical research.

While Kent also draws on literary sources for her discussion, Victoria Kirkham, Professor for Romance Languages at the University of Pennsylvania, focuses exclusively on Renaissance poetry, neatly complementing the two preceding studies. Kirkham presents the image of the ideal woman as projected in from writings from Dante to Angelo Poliziano and Lorenzo the Magnificent, from the older lyric tradition to Platonism, "declaring woman the agent of beauty that draws men to love, and through love, to God" (59).

The fourth essay "Portrait of the Lady, 1430-1520" by Joanna Woods-Marsden, Professor in Art History at the University of California, addresses different modes of representation. The author traces the development from comparatively sober, though idealised, likenesses of virtuous individuals, such as dowry portraits and portraits of princesses, to erotically charged, while still decorously depicted, fantasy beauties which began to emerge in the late Quattrocento. This discussion is beautifully observant not only with regard to format but also to fashion, and is the only contribution taking the reader into the sixteenth century. However, at times there is, here more than elsewhere, the danger of overstressing gender issues, and the present reviewer is not entirely convinced by the reading of sexual overtones into Raphael's and Giulio Romano's collaborative portrait of "Dona Isabel de Requesens" (Paris, Louvre). While admittedly the fancy portrait or fancy beauty as a genre is quite different from most of the likenesses considered in the book, a word or two more on this related category, particularly how it developed in the sixteenth century, would not have gone amiss.

The final "Costume in Fifteenth-Century Florentine Portraits of Women" by Roberta Orsi Landini and Mary Westerman Bulgarella, both from the Stibbert Museum in Florence, complements some of the points addressed in the preceding discussion by Woods-Marsden, but their essay remains tantalisingly short. The reader is referred to Rosita Levi Pisetzky's "Storia del Costume in Italia" (Milan, 1964), the fundamental, but not easily accessible study on the subject of dress. In this context, and especially in view of the editor's aim to address a larger audience, a more detailed discussion of garments and sumptuary laws would have been welcome.

The exhibition and, consequently, the catalogue entries proceed chronologically, tracing the evolution of the portrait from the standard profile of the middle of the 1400s to the three-quarter profile which became popular in the second half of the century. The catalogue entries are extended, but for the most part do not elaborate on the specific issues addressed by the exhibition title or the preceding essays.

While the essays focus almost exclusively on portraits of women in Florence during the fifteenth century, the catalogue does not follow the same prompt, with objects including painted portraits of men, Florentine portraits of women of the sixteenth century, and Venetian and Flemish fifteenth-century portraits. Appropriately, the essays make reference to the latter, but it is not immediately evident why single portraits of men have been included, and an attempt to arrive at an understanding of the female portraits by way of contrast with their male counterparts remains slight. More attention could similarly have been dedicated to a discussion of the genre of the double portrait of husband and wife.

Practically no wider contextual consideration or discussion has been allotted to the Venetian works, which, for one reason or another, are all by Jacometto Veneziano. In view of the inclusion of Venetian works in the catalogue and the scarcity of a discussion of the rather elusive genre of female portraiture in Venice during the Quattrocento, the scholarly value of the book would have been enhanced by an extended comparison of Florentine and Venetian works. Finally, the Florentine Cinquecento portraits of the catalogue remain an afterthought, with neither essays nor catalogue entries providing much help to integrate them into the discussion.

"Virtue and Beauty" may not be offering new insight into the subject, but it makes an enjoyable academic read and deftly summarises recent scholarship in a beautifully produced volume.