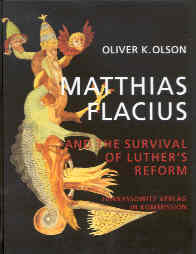 Oliver K. Olson's work "Matthias Flacius and the Survival of Luther's Reform" is a study in contrasts. To a certain extent this is unavoidable, for Matthias Flacius Illyricus has often been viewed from opposite ends of the spectrum. In the judgement of some scholars, Olson among them, Flacius was the last great custodian of Luther's legacy, a man bound by faith and principle to defend to the letter the confession as it had been developed by Luther in Wittenberg. In the eyes of others, he was far too intolerant and dogmatic at a stage in German history when dialogue was the only certain way to secure a lasting religious settlement. Even in matters of secondary importance, by which is meant the adiaphora of the mid-century debates, the Flacius of this school of interpretation is seen as a pedant and a sophist who did much to create the theological divisions of second-generation Protestantism.

Given the contrasts in his own life, the differences of opinion are hardly surprising. Throughout his lifetime Flacius remained inexorably true to the legacy of Luther (as he saw it), refusing to deviate from a fixed corpus of belief; and yet at the same time he was a scholar of immense learning and extremely wide interests, making lasting contributions to fields as diverse as political theory, ecclesiastical polity, the hermeneutics of biblical scholarship, and Reformation historiography. Born in an Istrian town ruled by the republic of Venice, his youth and early adulthood were spent surrounded by the Catholic religiosity of the south; and yet he would ultimately become the "second Luther" of the German lands, even though he was always a foreigner among the Saxons and (despite his proficiency as a polemicist) he would never really feel at home in the language. While at Wittenberg he trained under Philipp Melanchthon, ultimately becoming his colleague as professor of Hebrew; yet he would eventually turn against his teacher, and he would come to claim that the university and its professors had betrayed the essential teachings of the Lutheran Reformation. He lived his professional life in the towns of northern Germany (Wittenberg, Braunschweig, Magdeburg, and Jena) and yet his ideas would be influential throughout the lands of Protestant Europe, and his work would engage the broadest issues of the day, from the constitutional rights of the Holy Roman Emperor to the historical foundations of the Catholic faith. He was a man of extremes, hated by many and held in great esteem by others. Among the first generation of reformers, only a handful of figures, indeed, perhaps only Luther and Melanchthon, were as important for the history of the Lutheran Church.

Olson's "Matthias Flacius" is rich in the details of Flacius's life; it recreates the course of his professional history by drawing on a fascinating array of sources, from primary publications and correspondence to a wide range of secondary materials. Amidst all of the detail, however, two clear narratives stand out: first, the disagreement between Flacius and Melanchthon; and second, the relationship between Flacius and the Roman Catholic Church, and in particular his campaign against the papacy, an intellectual undertaking that would make a fundamental contribution to both the growth of Protestant identity and Reformation historiography.

The uneasiness with Melanchthon began soon after Flacius arrived in Wittenberg. It began as a difference of opinion over method and the use of Aristotle, but once the theological issues were (abruptly) raised with the introduction of the Interim in 1548, it became a dispute about the essentials of the faith, and it almost brought lasting division to the Lutheran Church. Flacius believed that Melanchthon's (initial) acceptance of the Interim betrayed fundamental principles of the faith. What Melanchthon viewed as adiaphora, Flacius viewed as essential, and he held that there was no such thing as a inconsequential element of ritual or ceremony that did not stand in an essential relationship with doctrine. Equally, Flacius believed that the acceptance of the Interim (or even its accommodation) was to concede control of the Church to the secular authorities. That is he why he reacted so vehemently to the Leipzig Interim, the compromise formula proposed by Moritz and written by the Wittenberg theologians, for in many ways he considered it more of a concession to the secular authorities than the original imperial draft. In its origins, the Interim debate was thus a highly personal disagreement between two former Wittenberg colleagues: Flacius and Melanchthon. Given the status of these two theologians, however, and given the issues at stake, it quickly became a very public dispute, especially once Flacius moved to Magdeburg and started to express his reservations about Melanchthon in print. At its most intense, the Interim conflict reveals much about the broader characteristics of the age, and in particular it sheds considerable light on the nature of Lutheranism in this period - the extreme precariousness of the faith, the tensions and discontinuities running through evangelical discourse, the unsettled and deeply distrustful relationship between the secular and the spiritual worlds, and the deep sense of insecurity that plagued northern Germany in the years following the death of Luther. Nor did these problems quickly fade. Soon after the debate occasioned by the Interim, Flacius was faced by an additional series of theological conflicts, the most significant being the issues raised by adiaphorism, majorism, and synergism, as well as the writings of Andreas Osiander and Caspar von Schwenckfeld. As each threat arose, Flacius rushed to print in order to preserve his notion of the unadulterated Lutheran faith. By mid-century, Catholics and Protestants alike considered him the premier custodian of Luther's legacy.

The second grand theme of Flacius's life was his dialogue with the Catholic Church. By the time he had reached Wittenberg he had already labelled the pope the Antichrist, and much of his early work - the collections of poems and songs, the verses by "pious and learned men" - were published with a view to denouncing medieval religion. But it was not until he had found relative safety in the city of Magdeburg, where he was joined by like-minded clergymen such as Nikolaus von Amsdorf and Nikolaus Gallus, that Flacius would begin his campaign against the Catholic Church. In its origins it was theological, of course, a continuation of the debates raised by the Interim; but it soon assumed a more radical direction, especially after religious convictions began to fuse with notions of rights and resistance. The "Magdeburg Confession" would synthesise the ideas at the heart of this dialogue, and while it has not yet received the attention it deserves, it remains one of the most important religious manifestos of the century. But Flacius's most important contribution to the age was his work on Protestant church history, an idea he had entertained for many years, as he noted in a letter to Hartmann Beyer (1552):

"I am going about with a great plan," he wrote, "which, of course, outreaches my own powers, but which, if it is carried out, could be extraordinarily useful for the church. First, I want to write a catalog of all the men that before Martin Luther of blessed memory fought the pope and his errors. Then I would wish that a church history would be written, in which in a certain order and in sequence it would be demonstrated how the true church and its religion gradually fell off the track from that original purity and simplicity in the apostolic time because of the negligence and ignorance of teachers, and also partly through the evil of the godless. Then it must be shown that at times the church was restored by a few really faithful men, and why the light of truth sometimes shone more clearly, and sometimes under the growing darkness of godless entity it was again more or less darkened - until, finally at our time, when the truth was almost totally destroyed, through God's unbounded benefice, the true religion in its purity was again restored." (219).

With this purpose in mind, Flacius laid the foundations for Protestant historiography, an approach to evangelical Church history that remained secure until the eighteenth century. Olson's study of Flacius as historian, and in particular his recreation of the making of the "Magdeburg Centuries", is fascinating. Surrounded by a team of scholars, Flacius orchestrated the writing of the massive Church history, thirteen volumes in total, with barrels of books and manuscripts arriving from cities as far away as France, Denmark, Austria, Italy, Hungary, and Scotland, and the Magdeburg scholars themselves travelling around the libraries of Germany in the search for manuscripts. It was the largest research project of its day, as the Emperor Maximilian recognised, and it was fundamental for the creation and the consolidation of a sense of Protestant identity. In this instance Flacius was not just the custodian of the Lutheran legacy, he was its author as well.

Oliver Olson's "Matthias Flacius and the Survival of Luther's Reform" is a very skilful treatment of a difficult subject. It is full of fascinating details, and it draws on a wealth of interesting source materials. Indeed, the footnotes alone warrant at least one reading. Moreover, it is a beautifully illustrated book, a very effective combination of text and illustration. At times, however, the use of primary and secondary citations tend to drown out the background narrative, and in general the work would have profited from more effective contextualisation. The search for order and authority in Reformation Germany reached beyond the realm of religious ideas. Olson's perspective on the past is almost exclusively the perspective of Flacius; that is the basis for both the strengths and the weaknesses of the work. No modern biography of Flacius has yet replaced the nineteenth-century study by Wilhelm Preger (and there are only a few articles for the English-language readership) and thus any work so familiar with the subject and so steeped in the sources is a welcome addition. At the same time, however, Olson's approach to the theme is so closely bound to the perspective of his subject (in both intellectual and religious terms) that sometimes the work has a curiously narrow range of vision. Given the depth of his scholarship and his command of the materials, future studies of Flacius will necessarily have to rely on Olson's work as a point of departure, but there is still much to be said about this subject in the broader framework of the age.