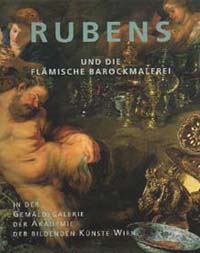 The title of the book immediately explains the idea behind the initiative. The reader is given a selective summary of the holding of 17th-century Flemish art kept at the Vienna picture gallery ('Gemäldegalerie'). The subtitle specifies that the book was published as a guide for visitors to the exhibition.

In the foreword, Renate Trnek explains that this catalogue has become a "Viennese version" of the catalogue published exclusively in Japan for the Millennium Exhibition which was staged in Tokyo, Nagoya and Kyoto. Although the title of this touring exhibition was "Rubens and his Time", the exhibits covered "a selection of superb works of European art from their holdings". A total of 72 paintings from the Viennese collection made the trip to Japan. This exhibition also provided an opportunity for appropriate restoration of the paintings to be loaned. The management of the 'Gemäldegalerie' did not want to pass up the opportunity to offer the Viennese public the chance to see for themselves the results of the substantial restoration work. Following this, a selection was made from the collection exhibited in Japan which would feature only works by Rubens and his Flemish peers. A total of 39 paintings were selected. Since little recent literature is available about this part of the collection from the 'Gemäldegalerie', the exhibition in Vienna also provided an opportunity to publish a German catalogue for this section of the fund.

In fact, the publication has become more of guide for the interested visitor to the exhibition than an in-depth academic catalogue. Thus, the intention was to place the emphasis on some of Rubens' masterworks from the collection of the Academy's 'Gemäldegalerie'. The process of restoring three of Rubens' major works "Boreas abducts Oreithya", "Bacchus" and the "Three Graces" is annotated in a concise introduction by Peter Halbgebauer.

Furthermore, the 39 paintings from the brush of 17 different artists are discussed very concisely. The biography for each of these artists has been kept very brief (an average of ten to twenty lines) and the discussion of their works covers no more than one to two pages per painting. A bibliography is lacking, although a very brief reference is made each time to "further literature". As a marginal note, it should be said that the monograph by Bettina Werche of Hendrik van Balen was not published in 2000 (143) but will be published at the end of 2003 in the "Pictura Nova" series published by Brepols (Turnhout).

The introduction does not give reasons for the selection of these artists. Obviously, the Antwerp masters have been given the most attention although, of the seventeen representatives, three are from outside Antwerp. Anton Sallaert and Jacques d'Arthois were active in Brussels, while Jacob van Oost worked in Bruges. Although Theodoor van Thulden was born and died in 's-Hertogenbosch, over a period of approximately twenty-five years he built up an artistic career in Antwerp. Artists from Antwerp and beyond are reviewed without distinction.

The order in which the various artists are presented is also not explained. Chronological order has not been respected (Jacob Jordaens, born in 1593, comes before Sallaert and De Vos, painters born in 1585 and 1584 respectively), nor is a sequence based on "importance" evident. Even within the analysis of the work of one single master, chronology is not used as a point of reference. As a rule, the numbering in the exhibition catalogue follows that of the exhibition. Observing the chronology of their production could, in my view, have increased the visitor's historical understanding and could also have made him or her more familiar with the specific stylistic development in the work of a given artist.

As far as terminology is concerned, the catalogue notes do not provide much in the way of explanation. The holding of paintings by Rubens in the 'Gemäldegalerie' in Vienna does in fact provide a unique opportunity for distinguishing the various phases in the genesis of his works of art. Although a number of types are described, it is not always clear what is covered by a specific term. "Madonna di Vallicella, Adored by Angels" is catalogued as a "Modello" (cat. no. 1, 18), as is "The Circumcision of Jesus" (cat. no. 3, 28). On page 20 we read, "Sketches in oil (also known as 'bozzetti' and 'modelli', which firmly record the composition for the client and were usually passed on to him)". The series of sketches which Rubens made for the ceiling of the Antwerp Jesuit church (cat. nos. 10-15) are referred to as "Six sketches for the ceiling cycle [....]". In analysing the style of a small oil painting on copper (34 x 45 cm), "The Judgement of Paris" (cat. no. 4), we read, "To a certain extent, this characteristic describes the style criteria of Rubens' oil sketches" (32). According to the catalogue, this is not a 'bozzetto' (32) because it is a sketch in oil which was intended as a work of art in its own right. The small "Judgement of Paris" is not to be designated a sketch because oil sketches "are produced from Rubens' brush [...] as notations of picture ideas". This insight implies that the reader will think that a large-scale composition can be linked to virtually every oil sketch ("[...] are thus at least related to the production process for a large-scale composition") (32). The use of copper as a medium seems to endorse the unique character of the mythological scene. This tableau therefore looks like an oil sketch, but is not classified as such because of its exceptional medium and because of the fact that no larger-scale version of the same "picture idea" remains.

The paintings listed under cat. nos. 1-6 are all regarded as works by Rubens; the next four paintings (cat. nos. 17-19) are attributed to "Peter Paul Rubens and studio". Nonetheless, in the first section of the "Rubens paintings", reference is made to artists other than the great master himself, who made their own contributions to the composition. For instance, Frans Snijders and Paul de Vos painted part of Rubens' majestic, bacchanalian scene, "Drunken Silenus" (cat. no. 5) and Jan Wildens collaborated with Rubens on "Nursing Tigress" (cat. no. 6). The three brothers-in-law Snijders, De Vos and Wildens participated as independent masters, but this was most likely not the case for the "Anonymous studio colleagues of Peter Paul Rubens" (40), who are also supposed to be responsible for part of the nursing tigress, a further unspecified section. Did Rubens then always put the "finishing touches" to these paintings? It seems to me that, if we want to explain to a wider audience the problems of the presence of the various hands in one painting, this should be done in a more consistent manner. No index is provided, nor is an explanatory glossary included. A map of the Southern Netherlands in the 17th century would also have been useful as a point of reference.

Producing a catalogue for a wider audience also implies that the innocent reader is assumed to have no prior knowledge. In the Vienna catalogue, reference is nonchalantly made to other drawings, sketches or paintings by Rubens and his contemporaries. Is it assumed that the average visitor to an exhibition of 17th-century Flemish art has a visual store of this comparative material? One can only evaluate what a sketch is if comparison with the final painting produced on the basis of the sketch is also possible. For instance, no illustration is shown of Rubens' painting on the high altar of Santa Maria di Vallicella in Rome (cat. no. 1 presents one of the preliminary sketches). Rubens was paraphrasing Leonardo da Vinci's "The Battle of Anghiari" (cat. no. 2). In an earlier phase, Rubens had already reworked a drawing by an Italian peer into the same composition (Paris, Musée du Louvre). The impressive "Boreas abducts Oreithya" (cat. no. 8) is stylistically compared to other works by Rubens, held in Vienna, Vaduz and Munich. Since no comparative illustrations are shown, it is difficult to visualise something in the "stylistic vicinity" (49). Jacob van Oost's "Young Woman at the Spinet" (cat. no. 29) is compared in its spatial setting with a group portrait by the same artist dating from 1667. This point of comparison is also left unillustrated.

Still, as a visitor's guide, the catalogue does have a number of advantages. Every painting discussed is illustrated in colour (following recent restoration) and the quality of the reproductions is highly convincing. The latter point is very important, since several of the paintings displayed have not previously been reproduced in colour. Analysis of the paintings is concise but apt. Each painting from the collection at the 'Gemäldegalerie' is placed within the work of the artist and any duty he owed to the works of other masters. A limited iconographic interpretation (without much source quotation) is also always given.

However noble the intention of providing the Viennese public with its own version of the "Japanese" exhibition, I cannot shake off the impression that the sub-project was launched in great haste.