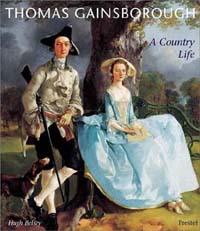 The greatest tribute to the genius of Thomas Gainsborough came not from the American millionaires who, a century after his death, paid vast fortunes for his flamboyant full-length portraits, but from his contemporary and rival, Sir Joshua Reynolds. Gainsborough's relations with the Royal Academy were never easy, yet its President used one of his official "Discourses" to deliver a fulsome eulogy on Gainsborough's achievement and his place in English art. Like later generations, Reynolds placed greatest emphasis on his late style, "all those odd scratches and marks", and it is only recently that his earlier work has become fashionable. But, as Hugh Belsey notes in his new book, Gainsborough took twenty years to reach his mature style. "Thomas Gainsborough: A Country Life" is not, as its title might seem to imply, a straightforward biography, but rather an attempt to examine the origins of Gainsborough's mature art, to show how widening horizons enabled him to develop as an artist. Belsey is well placed: he has been for many years the curator of Gainsborough's House in Sudbury, the little market town where the artist was born, and is mainly responsible for its current collection, which naturally concentrates on the artist's years in Suffolk, and includes several masterpieces.

Belsey judiciously divides his text into five chapters. Regrettably little is known about Gainsborough's training as an artist, and most details must be surmised from scanty evidence. Belsey does this with great skill in his first chapter, concentrating throughout on the evidence of the pictures, but linking them wherever possible to details about the sitters, the patrons, and Gainsborough himself. From his beginnings at Sudbury, where he painted his first portrait, the now fragmentary "Portrait of a Girl and Boy" of circa 1745 and long, and not surprisingly, attributed to Hogarth, Gainsborough worked solidly, producing a great variety of works within his chosen fields of landscape and portraiture. The second chapter is an extended discussion of his first great landscape, "Cornard Wood", 1748 (National Gallery, London), comparing it with Dutch models and Gainsborough's earliest paintings. Here, as elsewhere, Belsey weaves social history, close examination of the paintings themselves, and familiarity with recent literature.

The third chapter, oddly entitled "Re-Viewing the Landscape" (an unhappy nod in the direction of the pseudo-scholarship fashionable in some museums and universities), moves from two townscapes of 1747-8, one in Suffolk and the other, "The Charterhouse", in London (Coram Foundation, Foundling Hospital), to one of his most popular works, the "Portrait of Mr and Mrs Andrews" of circa 1750 (National Gallery, London). For the first time, landscape and portrait were successfully combined, the whole so much more alive than in the work of Gainsborough's contemporaries, Arthur Devis and Francis Hayman. In his following chapter "Portraiture in the Country", Belsey discusses the portraits he made in the county town of Suffolk, Ipswich, where clientele was more numerous and more prosperous. Finally, Belsey devotes a brief chapter to Gainsborough's years at Bath, and the beginning of his mature manner. Accounting for the transformation of his style in the late 1750s has always been difficult. Belsey proposes, reasonably, that the new 'rough manner' might have been developed from looking at pastels. Certainly, Gainsborough's own drawings became correspondingly free and sophisticated. The text ends with Gainsborough's first exhibit at the Royal Academy, "Isabella, Viscountess Molyneux" (later Countess of Sefton), in the consummate mature style, all shimmering silks and dramatically lit landscape, that are so familiar.

The book is handsomely illustrated, the text lively and stimulating. Occasionally, Belsey's imagination runs away with him: for example, there is no visual parallel between Gainsborough's portrait of Miss Ann Ford and Hogarth's "The Lady's Last Stake", though the subjects of both may be reformed gamblers. Also, there is an uncomfortable number of neologisms - "pentiment", "saque", "veristic" - and basic mistakes - "Torys", "a employable skill". Nevertheless, this is an enjoyable and stimulating introduction to England's most versatile painter in his first twenty years.