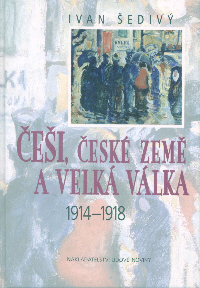 In a well-written introduction the author notes that the impact of the Great War upon Czech history has been portrayed so far as a caricature. There is the inscrutable Private Svejk, there are the idealists from the Masaryk Legions, and then, finally, there are the masses for whom the conflagration was reducible to mud, cold, and senseless suffering on behalf of an unfathomable cause.

Ivan Šedivy proposes to look at the Czech experience in World War I as it really was. He provides a useful review of the flawed system of 19th century international treaties and discusses the well-known contending theories regarding the outbreak of the Great War. The chapter dealing with the nationality problem in the armed forces of the Dual Monarchy relies heavily on Istvan Deák's Beyond Nationalism and other, often Austrian, secondary sources. Nevertheless, it brings up new and interesting data on individual Czechs serving the Emperor loyally and with competence, especially in artillery units, the fledgling air-force and the submarine fleet. Those men fit neither the Svejk pattern of behavior nor that of the dedicated anti-Habsburg conspirator nor, finally, that of the alienated masses who simply wanted to go home.

Having reviewed in considerable detail the Czech contribution to the war effort in the east, the Balkans, and Italy, Šedivy poses the intriguing question - were the Czechs good soldiers? Rejecting the established models, mostly inspired by national prejudices, the author concludes that the answer must be: it depends. He finds that the Czechs' enthusiasm for combat was low on the eastern front as well as against Serbia in 1914-1915. However, these same units proved themselves to be tough and determined combatants in Italy in 1915-1918. Indeed, some Czech units represented the hard-core of the Habsburg front in Italy to the very end. (Šedivy allows that the mountainous terrain on the Italian front and a history of wars against Italians throughout the 19th century may have been factors that minimized acts of desertion there.) In an intriguing display of what can be achieved with statistics, the author quotes a 1920 study of the relationship between the number of men killed in action and nationality in Austria-Hungary. The study overturned existing beliefs by finding that for every 1,000 men between the ages of 19 and 42 from the Czech lands, 171,2 were killed in action, whereas the corresponding number for the Alpine provinces of the empire was 130. This whole section is most interesting.

Nevertheless, one can only conclude that the Czech war record is mixed. Importantly, the author warns against assuming that acts against military honor on the eastern front were motivated by a conscious rejection of Austria-Hungary or even by Czech patriotism. He is more inclined to look for causes of Czech desertions in a gradual loosening of bonds between Czech soldiers and institutions of the Dual Monarchy, and in a general disgust with the overall conditions at the front.

In the second half of the book, Šedivy focuses on political relations between Vienna and Prague. Many of these episodes are reasonably well known, in particular the affair involving Karel Kramař and Alois Rasin. He also deals with the impact of the war on the economy in the Czech lands. The author surprises by delving also into the highly complex relationship between the war and intellectuals and artists. At the end, Šedivy focuses on the final year, 1917. He traces the decline of the K-u-K system in which too much power was vested in the wrong hands while too many potential reformers could only watch and await the inevitable. In short, it reveals the failure of all attempts to save Austria-Hungary at this late hour. This part, while interesting, covers the terrain just recently mapped out in various books by Antonín Klimek.

Šedivy has a very impressive command of a broad scale of sources, his knowledge of the map is second to no one's, and he writes in a style that makes it impossible to stop reading. Consequently, this book is packed with useful information and is a tremendous fun to read. I have learned from it and I have enjoyed the experience. I do not hesitate to give this volume my highest recommendation.