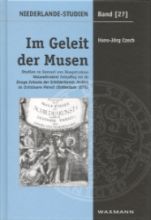 Hans-Jörg Czech's book on Samuel van Hoogstraten's "Zichtbaere Werelt" counts twice as many pages as its subject. Moreover, there are 1520 footnotes. Czech's research is as thorough as it is broad in scope. It is hard to think of an aspect of the "Werelt" which has not been studied in depth. Future researchers of the subject are well advised to make use of Czech's inexhaustible indices.

The content of Van Hoogstraten's treatise is expounded in chapters 5, 6, and 7. Chapter 8 analyses its illustrations, whereas the first four chapters treat the book as a book: a technical, commercial, social, and cultural product of writing, printing and publishing. Van Hoogstraten was widely read, and he wanted his readers to share his erudition. Czech identified the many quotations in the "Zichtbaere Werelt", and he discusses the ideas of the authors whose words Van Hoogstraten borrowed to buttress his own. In doing so, he confronts the ideas of Van Hoogstraten with those of his sources.

In his "Einführung", Czech elaborates on the problems Van Hoogstraten must have encountered when writing his book. Just as a painting or a work of literature a non-fiction book should please and instruct its audience. This audience, however, was not sharply defined, and no more was the book's subject: a mixture of art theory, practical advise for painters and art lovers, and a critical appraisal of Dutch art as it was around 1678.

The first chapter gives a survey of the "Zichtbaere Werelt's" reception in the 19th and 20th century. Czech rightly states that it was hardly ever studied as a well structured text with a logic of its own. Every researcher took the fragments he or she could use, disregarding their context. As fashions in art historical writing changed, so did the selection of passages discussed. In the conflict between Svetlana Alpers and Eddy de Jongh, both combatants quoted from the "Zichtbaere Werelt" to prove their opposite views.

Van Hoogstraten did not live to write the planned sequel to his book. He wanted to name it "De onzichtbaere Werelt". The dichotomy suggested by this pair of titles is the subject of Czech's second chapter. The next section, chapter 3, is about printing and publishing. The "Zichtbaere Werelt" was not a cheap book, but it sold rather well. To whom? There are no indications that professional painters were particularly interested (119-121). The many quotations from ancient authors presuppose an audience with a good general education. Most Dutch 17th-century artists, however, had stopped their school training at an early age to enter a painter's studio. Van Hoogstraten seems to have written about, rather than for painters.

Chapter 4 focuses on the Peritexte, the part of the "Werelt" preceding page 1. It contains, among other contributions, Van Hoogstraten's "Aen Den Lezer". Czech gives a helpful analysis of this preface in which he rightly draws attention to what is missing from it. Van Hoogstraten does not mention the low market for paintings around 1678; there is no discussion of what sets Dutch art apart from that of other countries; the book's title is not explained; and art dealers are not included in the "Werelt's" intended audience.

Chapter 5 expounds the structure of the "Zichtbaere Werelt". Czech is convinced that the book was organised as a curriculum in which every subject has a well-considered place. The reader-pupil gradually ascends from the initial level to the degree where he is qualified to start an independent career. Ideally, the book accompanies his personal development life long. Czech rightly states that Van Hoogstraten must have wanted to supplement the traditional training of young painters, not to replace it. I find this chapter the most valuable part of Czech's book since it clarifies the context in which quotations from the "Werelt" should be interpreted. As Czech points out, a lack of attention for this context is a common shortcoming among art historians.

The presuppositions on which Van Hoogstraten founded his discourse are the subject of the sixth chapter. Notwithstanding Czech's impressive learning, these pages are somewhat disappointing. The student of art theory who is familiar with the current discussion on the subject will find a great quantity of interesting background information, but not much that is essentially new. Admittedly, the literary genre of art theory is founded on authority and tradition. Van Hoogstraten would have been shocked if Czech had accused him of making statements which had not already been codified in earlier texts. What is new or topical at least, is to be looked for between the lines. This is what Czech tries to do in a separate section on the "zusätzliche Intentionen" of Van Hoogstraten's "Zichtbaere Werelt", chapter 7.

One of these intentions is the promotion of history painting as the highest form of art. Van Hoogstraten was one of the firsts to design a hierarchy of subjects in painting. Aristotle was among his sources of inspiration, but according to Czech Van Hoogstraten did not completely understand the philosopher. This raises the question of how deep his understanding was of the other books he quoted so eagerly. One of Czech's "zusätzliche Intentionen" seems to be to demonstrate Van Hoogstraten's erudition. Admittedly, my doubts have not yet completely vanished.

The last two sections of chapter 7 treat the painter's social and economic position, matters of great consequence in 1678, when the market for paintings had dramatically shrunk. All the same, Van Hoogstraten wrote that Dutch painting was flourishing. This is a somewhat unexpected statement at the end of a book which aims to remedy the many shortcomings its author had detected in the art of his compatriots. Neither Van Hoogstraten nor Czech seems to be able to solve this internal contradiction.

I want to come back to the question of the intended audience: Van Hoogstraten's audience and Czech's readers. Recent research seems to suggest that Dutch 17th-century painters were reasonably well informed about the theory of their art. A number of paintings and prints have been demonstrated to accost its rules. Therefore, one is surprised to see that professional painters were not among Van Hoogstraten's most avid readers (chapter 3), although he singled them out among the groups he wanted to reach (152-161). How did information about the rules of art trickle down into the studio? We simply don't know. One possible solution is that Van Hoogstraten codified opinions which already circulated widely, and were beginning to gain general acceptance. His book, like most propagandistic texts, must have addressed an audience which already subscribed to the ideas it advocates.

The compulsion to be exhaustive is Czech's second flaw. Next to nothing is known about the sequel Van Hoogstraten planned to write to his book. All the same, Czech devotes his second chapter to the subject. Whereas he cannot speak about the text of a non-existent book, he exhaustively discusses the philosophical and theological implications of its title. I failed to understand how an art historian might profit from this research. The discussion of the "Peritexte" in chapter 4 counts 38 pages of which some ten are devoted to Van Hoogstraten's "Inleyding". The remaining 28 pages contain hardly any surprise; the patient reader is meagrely rewarded with the information that one of Van Hoogstraten's friends did not contribute a laudatory poem (151).

It is to be regretted that a researcher who works with so much perseverance and accuracy was not protected against himself. His dissertation contains material for a number of highly valuable articles. If he had been stimulated to discard the ballast, and to rewrite essential parts of his manuscript in a comprehensible language, his contribution would have been widely applauded. Maybe every beginning researcher should be obliged to write at least one article in a language not his own.