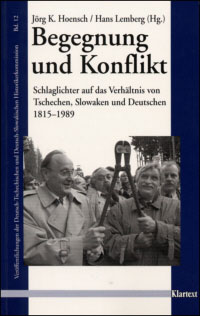 The seventeen essays and one document collected here have been taken from four collections of essays drawn from conferences of the "Deutsch-Tschechoslowakische (later Deutsch-Tschechische and Deutsch-Slowakische) Historikerkommission" and published between 1993 and 1998. [1] Since the number of contributions precludes an in-depth analysis of each essay in a review of this length, I will restrict my remarks to a presentation of each essay, and then reflect on the strengths and weaknesses of the volume as a whole.

The title, drawn from František Palacký's famous dictum that "the basic feature of the entire history of Bohemia-Moravia is [...] the constant contact and conflict of Slavdom with [...] Germandom", shows that these historians were determined to address the most pressing and problematic aspects of German-Czech and German-Slovak relations. Hence, while only a third of the essays concern the nineteenth century or the period of the Cold War, the majority and the one document focus on the period between 1918 and 1945, with two-thirds of those (and the document) examining the difficult period from Munich to the end of the large-scale expulsion of the Germans from postwar Czechoslovakia.

The collection is introduced by a short foreword, explaining the origins of the contributions, and a short essay by Rudolf Vierhaus, appealing for the "historicizing" (to borrow Martin Broszat's term) of twentieth-century German-Czech relations as a way of coming to terms with the past and easing tensions in the present. These are followed by the three nineteenth-century essays. Dieter Langewiesche focuses on the relationship between early nationalism, liberalism and constitutionalism and how they contributed to the creation of civil society in the German states by 1848/49. Then Jiří Kořalka, drawing on his earlier work on the Habsburg Empire, compares the development of German, Austrian, Czech and Slovak national identities and national movements in the middle decades of the century. Finally, Hans Mommsen examines how leading socialist theoreticians, from Marx and Engels to Kautsky and Bernstein, grappled with the problem of the conflict between the principles of internationalism and national loyalty in the second half of the century.

Four essays are drawn from the second previously published collection of essays on the interwar period. Eduard Kubů examines the relations between the Weimar Republic and Czechoslovakia in the 1920s, concluding that the differing foreign policy interests of the two states meant that the enshrined idea of "correct and friendly relations" could have no clear content. Stephan Dolezel gives an overview of Nazi German foreign policy toward Czechoslovakia, paying particular attention to the support given to, and Hitler's manipulation of, Konrad Henlein. L'ubomír Lipták then briefly examines the internal collapse of the "Czechoslovak" state idea, and the section concludes with Hans Lemberg's reflections on the long-term consequences of Munich, an essay that necessarily impinges on the essays following.

The extensive set of essays on the Second World War and the expulsion of Czechoslovakia's Germans contains almost half of the essays of the third collection. Three of these explore facets of the war years themselves: Detlef Brandes' examination of the development of Nazi politics toward the Protectorate, with particular emphasis laid on the three leading lights of Konstantin von Neurath, Karl Hermann Frank and Reinhard Heydrich; Miroslav Karný's recapitulation of earlier work on estimating the number of Czech victims of the occupation and his call for further research to clarify the totals; Jörg Hoensch's clear and persuasive analysis and delimitation of the successive phases of Germany's wartime policies toward the Slovak state; and, finally, Volker Zimmermann's examination of the last year of the war in the Reichsgau Sudetenland, which draws on his own earlier work.

The four following essays focus on the most contentious - and currently most topical - facet of Czech-German relations, the postwar expulsions. Hans Lemberg sketches the development of the plans for the expulsion, problematizing the widely held ideas that the Sudeten Germans were a Nazi "fifth column" and that Edvard Beneš was the father of the idea for the expulsion. Tomáš Staněk takes up some of these same issues before drawing on his voluminous prior work on the topic to address the mechanics of the expulsion. Much like Karný before him, Jaroslav Kučera then attempts to calculate the loss of life on the German side in the aftermath of the war. Finally, a 1996 Deutsch-Tschechische Historikerkommission press release is reproduced, declaring that, pending further research, the number of German deaths as a result of the events preceding and during the expulsion was between 15 000 and 30 000.

The final three chapters explore postwar topics. Eva Hahn examines expellees' identity formation and group membership through the prism of the notions of "Heimat" and "Zuhause". Finally, Edita Ivaničková and Radko Břach discuss the rupture in the relationship between Czechoslovakia and the DDR in the wake of the 1968 invasion and the importance of the 1973 Prague Agreement for Ostpolitik, respectively.

As this brief overview shows, there are several strong points to the collection. The authors are among the best-known and most respected members of their fields and they do not shrink from addressing many of the most contentious points of past two centuries of Czech-German relations. Given that the publication is intended to inform the wider German, Czech and Slovak publics of the course and results of the Historikerkommission's work to date, it is a success. The articles are neither overly long, nor too detailed for the educated layperson to absorb, and are marked by clarity and evenhandedness. The professional audience, however, will want to read the four volumes from which these essays have been gleaned.