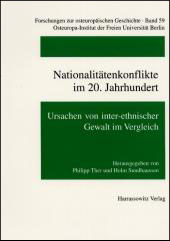 The Balkan Wars of the 1990s stimulated an upsurge of interest in the causes of ethnic and national conflict. Ethnic cleansing, genocide, mass rape, and the exodus of hundreds of thousands of refugees from former Yugoslavia captured the attention of scholars and the public alike. Initially, politicians and the press sought explanations in primordial nationalism and ostensible "ancient hatreds" in the region. It has taken nearly a decade of patient work by historians and social scientists to overcome these shibboleths. Ethnic conflicts in the Balkans are the product of the complex interaction of politics and ethnic entrepreneurs, influences of the international system, and the dismantling of old states and the building of new ones. The volume edited by Philipp Ther and Holm Sundhaussen ably reflects this new literature on ethnic and national conflict, with the focus clearly on Europe and the 20th century.

The book is divided into geographical sections: Southeastern Europe, Russia and the Caucasus, East Central Europe, and Western Europe. Ther contributes a general introduction and conclusion. Peter Hägel provides a concluding essay about the social science literature on ethnic and national conflicts, which includes a very useful annotated bibliography.

Both Ther and Hägel make clear that concrete historical cases need to be examined through the lenses of this growing literature, without subsuming the particularities of the individual cases to theoretical paradigms. In fact, the spirit of the book - what distinguishes it from many other primarily historical investigations of discrete cases of ethnic and national conflict - is its attempt to explore causation from the perspective of comparative history. The authors are all specialists on the conflicts they discuss; at the same time, they try to find commonalities (and differences) between their individual cases and those of their fellow authors.

The contributions to the volume are uniformly excellent. In the section on Southeastern Europe, Sundhaussen analyzes the Kosovo and Krajina conflicts from the perspective of inherently contradictory Serbian platforms of "self-determination" and "historical rights." In an analysis of the Macedonian situation, Stefan Troebst demonstrates the ways in which violence is tied to particular epochs and is therefore "reversible" (54). Carl Bethke develops a model for understanding the peaceful evolution of Vojvodina by counterposing the relatively stable ethnopolitical relations in the province to a series of potentially destabilizing factors. In the section on "Osteuropa", Kerstin Jobst explores the Civil War history of the Crimea (1918-19), using Mark Pinson's concept of "demographic warfare" to describe the ebb and flow of population movements in a region dominated by large empires and nationalist politics. Christoph Moeskes explores the conflict between Georgia and Abkhazia, both from a historical and contemporary policy perspectives, focusing on the problems created by the "double-secession" of Georgia from the USSR and Abkhazia from Georgia.

The section on East Central Europe is led off by Ther, who examines the history of Lviv (Lwów, L'vov, Lemberg) from a multinational Habsburg past to its Ukrainian present. Its story is a sad one: of warfare, depopulation, ethnic cleansing, and genocide. Ther makes the persuasive case that war itself feeds the fires of national conflict, destroying the possibilities of multiethnic civil society. In a companion piece, Piotr Madajczyk reviews the problems of Upper Silesia in the 20th century, especially the ways in which national and social differences tended to reinforce one another in times of conflict. In comparing nationalism and violence in Budweis/Budějovice and Ödenburg/Sopron over the course of the 20th century, Jeremy King examines the ways in which the nation-state increasingly became the focus of nationalist violence, while local conflicts were subsumed by larger and more powerful international forces.

By devoting the final section of the book to Western Europe, the editors appropriately emphasize the fact that ethnic and national conflict are not the exclusive domain of Eastern, East Central, and Southeastern Europe. Christiane Kohser-Spohn explores the strength of the autonomy movement in Alsace-Lorraine, one which tended to welcome French "liberation" after World War I, only to reject French policies of cultural and linguistic assimilation. Karl Christian Lammers provides an overview of the Schleswig issue since 1840, demonstrating the extent to which strongly engaged interstate relations, in this case between Germany and Denmark, can actually turn a history of ethnic conflict into positive, mutually reinforcing minority policies on both sides of a border. The final contribution is by Peter Waldmann on the frustratingly persistent violence in Northern Ireland. The problem here, as many ongoing cases of ethnic conflict in the world, is the investment of ethnic entrepreneurs and their sources of social support in the continuation of violence rather than in the establishment of peace. While neither Waldmann nor the editors develop concrete proposals for ending ethnic conflict, their volume contributes to a growing scholarly literature that can be profitably used by practitioners of "conflict resolution" to try to break the vicious circles involved in the habits of social violence.