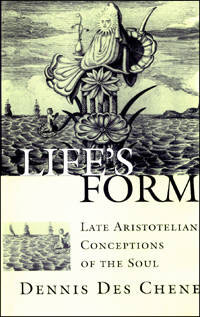 After his splendid "Physiologia. Natural Philosophy in late Aristotelian and Cartesian Thought" (Ithaca: Cornell, 1996; the book earned the Morris D. Forkosch Prize, the title of Choice Academic Book of the Year for 1996 and the NEH Subvention) Dennis Des Chene published another captivating book on sixteenth and seventeenth century Aristotelian philosophy. The volume on Life's Form treats the scientia de anima (science of the soul) in the works of the Scotist Eustachius a Sancto Paulo and of the liberal Jesuit scholastics such as Franciscus Toletus, Franciscus Suárez, Petrus Fonseca, the Coimbran commentators on Aristotle and Roderigo de Arriaga.

The book is devised into four main parts. The first reviews the "Data for the Study of Souls". The data are gathered from two sources: from experientia on the one hand (experience here is understood in its broader, Aristotelian sense which includes common sense and indirect accounts, too) and from "Propositions to Be Held by Faith" on the other. The data gathered from experience is the main and foremost source to understand the functions of the soul. In interpreting experientia, illusion is the exception that confirms the rule. With regard to faith, the immortality of the soul is the most important issue. As a reaction to new theories about the mortality of the soul (Cajetanus, Pomponazzi), the Lateran Council (1513) concluded on a number of propositions concerning the soul, which included the doctrine of the immortality of the soul. The Jesuit Aristotelians attempt to show that both according to reason and in Aristotle's doctrine, the soul is not destroyed at death. Toletus provides a practical vademecum, a sort of digest of the views held by the Church on the rational soul. He lists ten points which include the individuality, immortality and incorporeality of the soul.

The second part discusses the various definitions of the soul. The soul is defined in the first place in terms of life: both as the form of a body potentially having life and as the principle of the operations of life. Suárez defines life as having the power of self-moving and self-perfecting by virtue of something intrinsic. The case of plants is considered to be controversial, because life in them is somewhat "hidden". The difficulty is not whether they live but how to distinguish their operations from those of inanimate things. Immanence is one criterion of self-action, proposed Thomas: all and only vital operations terminate within the agent or the substance they belong to. Originating from an intrinsic principle is the second criterion of self-action: nonliving things never act but are always acted upon. Both principles present difficulties (e.g. eating and growth) which were meticulously elaborated by the Jesuit authors (especially Toletus, Suárez and Arriaga). With regard to applying the term "life" to God, Suárez follows Thomas claiming that God is viventissimus, most alive. But in what sense can the same term be applied to God and plants? Suárez sees the similarity in being "self-operational, where 'operation' is taken broadly, in abstracting from the efficient cause or from being in actu by nature" (De Anim. 2c4no21, Opera 3:498, cited on p. 64). Arriaga renounces even this basis and to him 'life' relates only equivocally to God and to plants.

Aristotle's definition of the soul as form of the body is used in late Aristotelianism to connect the human soul as tightly to the body as possible, yet granting it immateriality. This connection between body and soul is important in order to comply with the teaching of the Church, according to which anything that applied to Christ's soul as being fully human is exemplary to all human beings. The soul then, as the substantial form of the body cannot be only an accident ('temperament' as Galen and his modern followers believed) to the body neither is the soul an entirely separate substance which uses the body sheerly as an instrument (a view ascribed to Plato and Averroes). The soul, for the Aristotelians, is the forma informans (as opposed to the forma assitens) of the body. Des Chene then scrutinises the intriguing questions resulting from Aristotle's definition: In what sense is the soul the 'first' actus of the body and in what sense is it actus at all, and the body potentia? And of which body is the soul the form? In what sense is the body different from the forma corporeitatis?

Aristotle's second definition defines the soul as principle. The commentators of De Anima take Aristotle to be demonstrating his first definition from the second, though they disagree about the exact type of demonstration: whether Aristotle argues a priori, from cause to effect (Toletus and the Coimbrans) or a posteriori, from effect to cause (Suárez). This disagreement is due to the underlying uncertainty about the second definition itself. They all agree, however, that this second definition is descriptive and not quiddative. This will have bearings on questions of unity, especially the unity of the soul and the composite.

In part three Des Chene surveys the powers and the parts of the soul. The question how the one soul can act in so many different ways in animals and humans led Plato to claim that each individual has several souls. Aristotle, on the other hand divides the soul into three different parts: vegetative, sensitive and rational "souls". The Aristotelians then have to establish how the different parts of the soul, and so too its powers differ from each other. They have to account for the unity of the corruptible matter and the immortal reason. The question of the divisibility of the soul by splitting the body (in plants and some animals) have to be answered as well. The chapters in this part focus on the various kind of distinctions (active and passive, immanent and transeunt, intrinsic and extrinsic). On the basis of these distinctions the powers of the soul are studied. From the time of Scotus and Ockham, three essential positions were held by philosophers on the question whether the soul is distinct from its powers. These positions were more or less followed by the sixteenth-century Aristotelians, too: (i) Nominalists claimed that the powers of the soul are the soul itself (Toletus) , (ii) Scotists believed that the powers of the soul differ formally but not really from the soul, (iii) while Thomists argued for a real distinction between the soul and its powers (Eustachius and the Coimbrans).

The last part examines the unity of the soul both in the sense of functional unity of the parts of the soul and the union of the body with the human soul. The general setting of the treatment of the rational soul and the unity of the human soul straddles the boundary between natural philosophy and theology. This setting is the principal concern of the chapter. For the Jesuit scholars it was essential not only to disprove Plato's and Galen's claims about the multiplicity of souls but to demonstrate that Aristotle's occasional mentions of 'parts' of the soul, and the common terminology about 'rational soul', 'sensitive soul', etc. did not tell against the unity of the human soul, as it was upheld by the Catholic Church. The tripartite division of soul is nothing more than a sheer distinction in reason. The question about the integral unity of the soul was important with regard to its incorruptibility. General agreement held that rational souls were indivisible (Arriaga is exceptional in believing that not only the human rational soul but purely spiritual substances, too can be divisible). What is applicable to the rational soul, has to be applicable to all souls. Toletus proves this on the basis of the immateriality of the soul. But if the soul is indivisible, it cannot be corrupted but only annihilated. The late Aristotelians paid special attention to how the soul is tied to the body in a substantial union: "the entire soul is in the entire body, and entirely in each part (tota anima est in toto corpore et in qualibet parte)". (p. 191.)

In his illuminating account of the philosophy of the sixteenth- and early seventeenth century Aristotelians Des Chene manages to present his complicated matter with a great degree of simplicity without overlooking details. His book will be appreciated not only by students and scholars of late Aristotelianism but should be the guide of anyone interested in the philosophical background of the period. It is regrettable that a few but disturbing typographical errors have managed to creep into a book of such quality.

The interested reader can follow Des Chene's further explorations into seventeenth century studies of the soul (especially in Descartes' philosophy) in Des Chene's latest book "Spirits and Clocks. -Machine and Organism in Descartes" (Ithaca: Cornell, 2000), which is considered by the author as the second part of the volume on Life's Form.