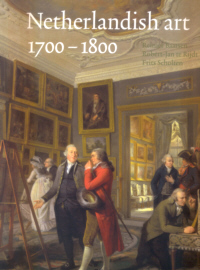 This lavishly produced volume is the third in a series of four on the collections of the Rijksmuseum, each covering a century of the Dutch nation's artistic output. It treats an even 100 works in entries of one or two pages each, accompanied by superb colour illustrations. Decidedly different from a complete museum collection catalogue, such as the monumental volumes being published by the Rijksmuseum itself on its collection of paintings, it nonetheless aims very seriously to represent the collection by means of a selection of significant works.

This introductory format carries particular weight with this volume, as it showcases a part of the collection that is lesser known to most readers, compared to the already famous achievements of the seventeenth century in the Northern Netherlands. There is a genuine engagement in the entries, as the authors seek to explain and celebrate the works of this era. Supporting these texts are five essays, by established specialists in the various areas covered here; Reinier Baarsen leads by orienting the reader (likely more familiar with the isolated and independent nature of 17th century easel paintings) towards the heightened importance of the decorative interior ensemble, with various components shaped towards a coherent unity. Indeed, works of applied and decorative art comprise nearly half the total selection. Also preceding the catalogue section is an overview of Dutch history of the eighteenth century by Kees Zandvliet, introducing important points such as the concentration of wealth among Amsterdam's families, the continued cultural role of the House of the Orange even through the second stadholderless period, and its sudden sidelining during the two revolts of the Patriots or Batavians at the century's close. Following the entries are three essays elaborating on specific areas. Frits Scholten highlights the achievements of the Amsterdam workshop of Ignatius van Logteren, and Jan Baptist Xavery, in particular his breathtaking figure group in the Church of St. Bavo in Haarlem, in his overview of sculpture. Bianca du Mortier's essay on Dutch eighteenth century dress focuses on high fashion, helpfully explaining practical and technical aspects as well as the position of Dutch practice in a wider Western European context. Baarsen and Robert-Jan te Rijdt close by addressing the history of the collecting of eighteenth century art of various categories, which received its great impetus in the postwar years, with sculpture benefitting from the directorship of the Jonkheer David Röell.

Chronology dictates the order of the catalogue, which quickly brings the reader to the two flower painters who represent the halcyon of the tradition of the previous century, Rachel Ruysch and Jan van Huysum (nos. 2, 3). In this context, the exquisite refinement that Adriaen van der Werff brought to fine painting would not have been out of place, even if his output bridges the previous century. With the wine cooler and fountain produced by Jan Lanckhorst and Alger Mensma for Cornelis Schrijver (no. 24) we confront the sophisticated vocabulary that Classicism brought to the decorative arts. While many of these works are derivative of foreign practice, the paintings of Cornelis Troost demonstrate an original contribution, in the striking Portrait of a Member of the Van der Mersch Family (no. 31), and his scene of An Amsterdam Town (surely it should be "City") Garden (no. 35), but particularly his theatrical scenes, which narrowly preceded those of his more famous counterpart in England, William Hogarth. Other memorable selections include Matthijs Horrix's clock case (no. 82), a pierced tea chest by Pieter Adolf Bruné (no. 84), the gold goblet by the brothers Metayer, and Jan Baptist Xavery's splendid bust of Don Luis da Cuhna (no. 39), all closely keeping with French fashions. In painting, Jacob van Strij's achievement in stretching the oeuvre of Albert Cuyp (no. 88) cannot be overlooked, and the painterly achievements of Jan Ekels (no. 89) and Isaac Ouwater (nos. 78a, b) likewise hinge on the elaboration of famous Dutch models from the age gone by, one whose glory was not forgotten, as the Dutch must have noticed in the interest of foreign collectors and the steady flow of these works to London, Paris, and the courts of Germany. Even Adriaen de Lelie's notable scene of art lovers in the famous cabinet of Jan Gildemeester (no. 95), keeping with modern French and English taste, still highlights works by Ter Borch and Rembrandt, serving as a colourful emblem of the tensions affecting Dutch art in this century. On the other hand it is remarkable to consider that Jean Grandjean (no. 80) was the first of his countrymen to embark on a study trip to Italy in fifty years, testifying to the cultural constrictions of Dutch artistic practice for much of the century.

In true Dutch style, these texts are often rich in details about biography, patronage and interpretation. The early section of the catalogue feels at times like "Marot & Co." in emphasizing the wide impact of the Huguenot émigré architect Daniel Marot, whose influence emanated from his favoured position with the House of Orange. Indeed, one senses an over eagerness to emphasize the "new order" of the eighteenth century at the expense of continuity with the seventeenth. The omission of the painter and biographer Arnold Houbraken (whose Sacrifice of Iphigenia was acquired not so long ago), and the fijnschilder Adriaan van der Werff (who does make it into one of the essays) seems forced, as they both represent significant and original contributions to the period and continue to enjoy fame. Some entries remain vague about specific aesthetic achievements, and adherence to foreign fashion regularly surfaces as a criterion in the analyses, as with the candlesticks by Christiaan Warenberg (no. 8) and the two tureens from the factory of the Count van Gronsveld (nos. 67a and 67b). The salient comparisons to French models would of course complete the picture, but at the same time perhaps diminish the presentation of Dutch achievements. Occasionally one senses a tension in presenting works of art that are so striking as to be irresistible, even when the artistic achievement is qualified, as seen in the incompetently rendered figures on the nonetheless compelling Delft faience frame produced by Cornelis Brouwer's pottery.

At this level it is a concern to see regular problems with translation into English, especially with a text aimed at a larger audience. We read about the "chiselling" of silver, where "carving" is meant (46, 54). Instead of a "tradition, which is very convincing", a "reliable tradition" is meant (48). Passion scenes are "usually depicted" rather than "usually stated" (54). There is in English a significant distinction between "making love to" and the "seducing" that is meant in no. 38b (107). The word "obviate" is too obscure for use here (51), but at the same time the text is sprinkled with informal or conversational usage: "little" instead of "small", "the whole thing" instead of "the entire piece/work", etc. Fortunately these curious lapses do not deter substantially from comprehension and enjoyment, and this English edition is sure to reach a wide international audience.

This sensitive and reflective overview of the Rijksmuseum's 18th century treasures is delivered with poise by a team of writers that demonstrates its formidable depth of scholarship in the area. A firm hand has clearly worked to shape texts by many authors into a coherent whole. This catalogue is absolutely not to be dismissed as a coffee-table edition of "greatest hits" for a popular market, but instead provides an extremely useful overview of an important part of the Rijksmuseum's collection, and thus by definition Dutch art of the eighteenth century.