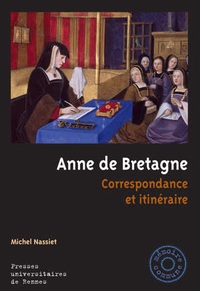 Michel Nassiet's publication is a major contribution to our understanding of the influence, power, and agency of medieval and early modern women. He provides a very positive picture of Anne of Brittany (1485-1514), duchess of Brittany, where she ruled in her own right before becoming Queen of France for the rest of her life by marrying two successive kings of France.

She married Charles VIII (1483-1498) in 1491, and after Charles' sudden death from an accident in 1498, married his brother, Louis XII (1498-1515), in that same year. Anne's constant efforts to produce a male heir, with at least ten pregnancies, probably led to her premature death in 1514 before age 30. Although a son, Charles Orlando, was born to the first couple in 1492, that son died in late 1495. There was not another surviving male child from either marriage (on their two surviving daughters, see below.)

Earlier historians have emphasized Anne's patronage of surviving manuscripts, her literary and musical pursuits, and how her education far outstripped that of her royal husbands. At a time when her royal husbands were trained in the arts of war, but were barely literate, Anne as duchess and then as queen composed and scribed her own letters in old French, Latin, and occasionally in Spanish. They have downplayed Anne's role in the political events of the time and have treated her, if at all, as a disobedient daughter. Daughters of dukes and mothers of queens were negligible in the traditional historiography.

In this new age of treating women's power and authority with respect, Nassiet argues for Anne's "agency." He shows that the substantial correspondence which he has spent decades collecting and editing demonstrates her political prowess. As Duchess and then as Queen, Anne of Brittany took an active interest in rulership and politics. From the death of her father, Francis II, Duke of Brittany in 1488, Anne made efforts to maintain the independence of Brittany and her own rule as duchess.

Anne began this effort by rejecting the marriage promise that her father and his advisors had extracted from her as an underage girl to marry Alain d'Albret and to be ruled by her father's advisors, this d'Albret and Rieux. Instead - in what Nassiet describes as a virtual "coup d'etat" - she turned instead to the English and to the prince of Orange to support her establishing her own rule over Brittany.

Anne's letters to various correspondents, including Queen Isabelle and King Ferdinand of Spain, ask that they stop pushing for the earlier arrangement. Instead as France came ever closer, she held out for marriage to the King of France, Charles VIII, and with his death to Louis XII. As Queen the affairs of Brittany were her special concern and at the end of her life, Anne would attempt to have her younger daughter be named duchess and rule an independent Brittany.

Nassiet provides a model edition of a set of letters that survive almost always as single copies in the archives and libraries of France and beyond (London, Rome etc.). Only a few of them had been published earlier. He is able to more closely date a few of those. Letters are organized in chronological order, transcribed and annotated with extensive notes about people and places mentioned therein.

After a biographical introduction, Anne's letters as Duchess come first as a separate collection, identified with roman numerals. Nassiet then uses letters for her passive correspondence from that same period.

Her correspondence as Queen, begins with a "Catalogue des Missives d'Anne, Reine de France," (103-148); the latter lists all letters or references to them which Nassiet has found and establishes the numbering of the Queen's letters. It uses arabic numerals. The Queen's passive correspondence begins with number 1 instead of a more useful P-1. There are then a few "sources complémentaires", again numbered with Arabic numerals.

The notes for all these letters are extensive, but are nowhere indexed. This means that one must take care to note down such references as they are encountered, or risk not being able to locate again such tantalizing notes as those documenting comments by Italian ambassadors on how smitten Anne and Louis XII appeared to have been with one another! There is no bibliography of unpublished sources.

In the "Catalogue" there are references to 410 letters for the twenty-one years from 15 February 1492 to December/January 1513/1514. Only about a quarter of these letters have been found. Many of the references to letters now lost come from two manuscript inventories: Paris, A.N., KK 85, which lists Queen Anne's correspondence from December 1493 through September 1496, and Nantes, Bibl. muni., no. 1335, which lists correspondence from October 3, 1497, to September 27, 1498. For this entire span of nearly five years, Nassiet's catalogue covers numbers 13 to 263 - that is 250 of the total 410 references, or 61 percent of all references.

Overall Michel Nassiet here makes a solid argument for Anne as a woman of power and authority. Her "agency" was comparable to, possibly exceeding, that of many other royal and noble women of the late medieval/early modern age. Perhaps the fact that she was neither the daughter of a king not the mother of kings explains why she has been overlooked. That power and authority extended to her daughters as well.

Although producing no surviving sons, Anne was mother to two surviving daughters with Louis XII. The elder, Claude, born in 1499, would also be Duchess of Brittany (1514-1524) and Queen of France, marrying in May 1514, Francis I son of Charles, Count of Angoulême, and Louise of Savoy. Francis I thus succeeded his first cousin once removed who was also his father-in-law Louis XII.

Francis I was King of France from 1515 until his death in 1547. His wife, Claude, Anne of Brittany's daughter, died in 1524. They produced seven children, most notably Henry II (1510-1559) who became King of France and married Catherine de Medici.

Renée (1510-1574), the younger surviving daughter of Anne and Louis XII, was born in 1510. Her mother Anne of Brittany attempted to have this daughter Renée named duchess of Brittany rather than her elder sister Claude, but Louis XII resisted Anne's attempt to make Brittany again independent of France.

Renée in 1528 married Ercole II d'Esté (d. 1559), the future duke of Ferrara, son of Lucrezia Borgia and grandson of Pope Alexander VI. She was duchess of Ferrara from 1534 to 1559. The marriage produced five children; the first two, daughters, were each briefly engaged to be married to Charles I.

Renée's support of Protestantism led to her arrest for heresy in Ferrara, and she only escaped to France in 1560, a year after the death of her husband. She died in 1574 at her chateau of Montargis where she had established a center of Calvinist Protestant worship. Like her sister Claude, Queen of France, who in many senses brought the kingship to her husband, Renée, as a pivotal figure in religious reform, is testimony to the importance of their mother, Anne of Brittany.