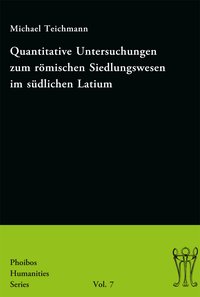 In Mediterranean survey archaeology, the use of "legacy data", i.e. the use of data from research done in the past in a present-day academic context, is currently high on the agenda. [1] This is for good reasons given a) the rich tradition in classical topographical landscape archaeological studies of Mediterranean countries since the Renaissance and b) the impressive coverage of Mediterranean regional landscapes through systematic site and artefact surveys. [2] In Italy, we may reckon data from both extensive surveys in the classical topographical tradition and data from systematic site and artefact surveys to the category of 'legacy data'. [3]

Not surprisingly both approaches converge in the rural landscapes around Rome, the once undisputed political centre and imperial metropolis of the western Mediterranean ancient world. In its heyday, the food economy of the Eternal City depended, apart from overseas imports, above all on the intensive cultivation of its immediate hinterland, itself boasting numerous small cities with their own hinterlands. In the period from the mid-Republic to the mid-Imperial period and beyond, the hinterland of Rome sensu lato became filled with thousands of Roman villas, among which many villae rusticae, i.e. sturdily built farmsteads with a primarily productive function. Alongside them, there were the luxurious elite villa's that combined leisure and production, and the coastal villas, that were primarily meant for the leisure of the higher social echelons. While the latter two types of villas have been subject of recent books, the former has received less attention. [4]

Michael Teichmann has taken up the challenge of bringing all legacy villa data together for nine regional landscapes, spread over the territory between Rome and the Roman port town of Terracina, located about 120 km to the southeast. His research covers the period between ca. 300 BC and 300 AD and has resulted in the compilation, visualization and locational analysis of all villa's known in the literature for each landscape separately.

In the first chapter, the author explains that the villa will be the main subject of his analysis, with sanctuaries, tombs, towns and roads as the religious, socio-economic and infrastructural points of spatial reference in the surrounding landscape. To set the scene, the author starts with an introduction on the delimitation of the research area, and the theoretical and methodological background of modelling survey and landscape data in GIS. He emphasizes the 'Notwendigkeit quantitativer Untersuchungen' for the comparative interpretation of the distribution of villas across different landscape zones. Following a historical introduction based on the ancient sources (chapter 2) and an introduction to the geographical aspects of the landscape zones of the research area - which in the area vary from volcanic and limestone relief to river valleys and coastal flats (chapter 3) - the author specifies the GIS applications he will apply. These consist of location modelling, cost analyses, density estimations and viewshed analyses. The author indicates the potential and limits of each analytical tool for furthering our understanding of the location of villas in the landscape. He does so in terms of locational preferences, i.e. nearness to major infrastructure, major towns, Rome itself, important sanctuaries, and landscape variables. Chapter 5 deals with the classification of sites identified as villa in the consulted literature and databases, and the underlying criteria for this functional attribution. It also explains on what criteria chronology is established, such as certain types of artefacts (coins, diagnostic ceramic wares etc.), and building techniques. The chapter concludes with a comment on the analytical methods applied, including the application of statistics.

Chapters 6 deals with the core of the author's research, i.e. the nature of his data and the methodology of his quantitative approach. Here, the author presents his actual analyses for which sufficient data were available in the nine regional landscapes to attempt locational analyses. The steps taken in the analysis of each of the nine landscapes are as follows. First the landscape zone is screened for the presence of sanctuaries of some importance, towns and infrastructural works. These are briefly described. Next follow the locational analyses of the villa's: a) their landscape setting in order to evaluate location preferences such as exposure to sun and wind, and soil fertility b) cost distances to evaluate how easy or difficult sanctuaries, (port) towns, rivers and roads could be reached from the villa c) local villa density, visualized in kernel density maps to evaluate the presence of clusters of villae d) viewshed analyses to establish visual contact between villae on the one hand and sanctuaries, towns , roads, mountains and the sea on the other. The author comments consistently on the degree of statistical validity of his analyses. Data visualizations are given in colour plates at the back of the book. The various GIS analyses result in a wide range of observations that are brought together in section 6.11 after which the chapter concludes with a comparison with studies by Rob Witcher on Etruria, Eeva-Maria Viitanen on the mountainous zones east of Rome, and Sebastian Vogel et al. on the Sarno valley in Campania, adding to the observations already done by the author himself. Finally the author compares the outcome with the opinions and recommendations of the agronomers Cato, Varro and Columella on the preferred location of a villa in a given landscape. Chapter 8 contains the conclusions and some methodological recommendations for further research.

All in all, this is a well-written, well-structured and well-documented work making a contribution to an important aspect of the study of the rural settlement history of south Lazio, that of the distribution of Roman villae over the variegated landscapes of South Lazio. In compiling the extensive database, the author acquired also access to data from unpublished theses, which makes his dataset unique. His GIS analyses result in many, often interesting observations on the location of villa's linked to the variables discussed above, but these do not result in meaningful overarching spatial and chronological patterns that allow the author to interpret his observations in socio-economic terms. Neither do they result in clear-cut comparisons with the other study areas. The reason behind this is the low resolution of the data in terms of site classification, chronology and functional attributes and the lack of contextualization of the changing economic role of the villa within the Roman economy of South Lazio. While the relationships established in the author's GIS analyses of villa's with other site types (sanctuaries, towns, tombs) and infrastructure is effective, no link is established with the more complex settlement reality of the Roman rural landscape that only becomes visible in datasets acquired by intensive artefact surveys. Lack of detail in the recording of archaeological sites and the landscape clearly is a limitation when working with legacy data only. This is not to say that we do not deal with a relevant study here. On the contrary, Teichmann shows how standard GIS analyses are only of limited use in revealing locational preferences in the complex local villa landscapes of the period studied. At the same time, he paves the way for himself and other researchers to attempt other types of analysis than the ones presented in this book, aiming at answering more complex questions on the socio-economic and ritual spatial aspects. [5] For instance, modelling the land plots of individual villas in the clusters highlighted in the kernel density maps, may give insight in the availability or scarcity of land. In combination with artefact analysis it can even allow a comparative insight into the economic backgrounds of such clusters, especially when more attention can be given to land evaluation. [6] Also there is considerable potential of integrating the database with other 'big data' initiatives. [7] In sum, while the author is to be commended for this ambitious study, there is hidden potential to say more about the Roman villa economy based on legacy villa data than presented in this well-documented book. [8]

[3] Systematic topographical inventories south of Rome go back around a century, with Giuseppe Lugli as the leading figure in the famous Forma Italiae project, a national - and still on-going endeavour to map the archaeological landscapes of Italy on 1: 25000 map sheets.

[7] See for a recent database project on the hinterland of Rome with the aim to study demography and the Roman economy http://comparativesurveyarchaeology.org/.

[8] The data file is accessible via the website of the publishing house Phiobos (https://phoibos.at/OA/PhHS_7-Katalog.zip).