Stéphane Benoist (ed.): Rome, a City and its Empire in Perspective. The Impact of the Roman World through Fergus Millar's Research, Leiden / Boston: Brill 2012 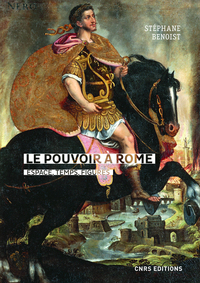 The city of Rome in the first four centuries AD was the location of a remarkable convergence of political control, economic might, cultural authority, and religious centrality. These interlinking sources of social power were simultaneously expressed in Rome's monumental cityscape and embodied in the figure of the Roman emperor, the city and the monarch each animating the other, in space and over time, through a resonant and mutually constitutive ideology of Roman imperial supremacy.

No one has explored this nexus of topics as comprehensively over the last thirty or so years as has Stéphane Benoist. The volume reviewed here collects twelve articles and book chapters published between 1999 and 2009. The essays have not been systematically updated, but they are standardized and minor errors have been corrected. These twelve studies constitute a representative cross-section of Benoist's considerable output over the years - the bibliography includes no fewer than 55 articles and chapters, in addition to four monographs and seven edited or co-edited volumes - focusing in particular on the themes of his two monographs, La Fete à Rome au premier siècle de l'Empire. Recherches sur l'univers festif sous les règnes d'Auguste et des Julio-Claudiens (Brussels: Editions Latomus, 1999) and Rome, le prince et la Cité. Pouvoir impérial et cérémonies publiques (1er siècle av. - début du IVe siècle ap. J.-C.) (Paris: Presses universitaires de France, 2005). Anglophone scholars will welcome the news that a similar collection will soon appear in English under the title Festival, Ceremonies, and Imperial Discourse: The Emperor at Rome, from Augustus to Constantine.

The volume opens with a brief intellectual biography, in which Benoist sketches his interdisciplinary formation as an epigrapher, historian, and anthropologist and signals his debts to his former advisor, André Chastagnol, and to a frequent collaborator, Ségolène Demougin, to whom the volume is dedicated. The chapters that follow are organized into three sections: I. "Espace" (chapters 1-4), II. "Temps" (5-8), and III. "Figures" (9-12). Each section includes a short prefatory essay that sets the studies in context. There is no general conclusion (not to be expected in a volume of this nature, of course), but the volume is equipped with a very full bibliography and useful set of indices.

The strengths of these essays will be well known to those familiar with Benoist's work. The gathering of evidence, mostly textual (literary and epigraphic), is very impressive, and Benoist offers regular assessments of the nature of the evidence - what it can and cannot tell us - that are always salutary. His engagement with the modern scholarship is comprehensive and judicious (and we can thank CNRS Éditions for the decision to print footnotes instead of endnotes). Especially noteworthy is Benoist's adroit balancing of structural and synthetic perspectives, on the one hand, with narrative and diachronic ones, on the other. This dual orientation is particularly clear in the essays on the ceremonial returns of the emperor to the city (ch. 3, "Le retour de prince dans la Cité [juin 193-juillet 326]"); on time-reckoning and calendrical technologies ("Fasti et 'geste impériale': le temps civiques à Rome [1er s. av. n.-è.-IVe s. de n.-è]"); and on the long-term transformation of the emperor from Pontifex Maximus to a ruler "chosen by the gods" ("Du pontifex maximus à l'élu de Dieu: l'empereur et les sacra [1er s. av.-IVe s. ap. n. è]"). Like several other essays in the volume, these studies demonstrate the insights that can only come from such a long-term framing of the relevant problems, too often missing from studies of Roman imperial representation and ideology.

There are a few shortcomings. It is disappointing to find so few maps and images in these pages, which leaves the reader with an incomplete picture of the spatial and visual contexts of "power at Rome." There is also less formal argumentation and explicit theorization than one might expect in a collection of essays on these themes. It is not insignificant that the concept of "power" itself is nowhere explored in depth (nor does it merit a separate entry in the index). As a result, these essays are not really organized as systematic arguments mobilized to advance a particular thesis, but should be read instead as explorations of problems and as extended "think pieces."

As "think pieces" these studies are uniformly suggestive and inspiring and it is certainly useful to have them collected together and published between two covers. So where can the scholarship on these topics go from here? I offer two possibilities. The first would be a fuller integration of the Republican background. Of course Benoist addresses the Republican roots of many imperial practices and discourses, and has important things to say about Sulla, Pompey, and especially Caesar, but in light of recent work on the political culture(s) of the Republic, more systematic work covering the period from, say, the Middle Republic through the High Empire could shed new light on old questions. The second way forward would be to set the Roman material in a comparative context. Imperial Rome is, of course, far from the only case in which we find this self-reinforcing nexus of urban monumentality, monarchic authority, and political power. Studies of analogous polities, such as the Achaemenid, Han, or Ottoman Empires, might help us not only to identify what is typical and what is distinctive in the Roman case, but also to outline new research agendas based on these comparative insights. Benoist's work will be a useful starting point for either venture, and all scholars working on these problems will want this convenient collection of his work to hand.