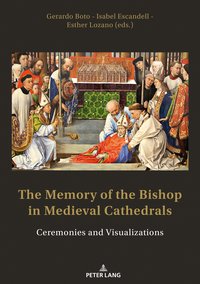 This important collection of essays brings together twelve scholars who provide thoughtful and original essays on the memoria of the episcopacy in the Middle Ages. The focus is on Western Europe with case studies taken from Amiens, Cologne, Lausanne, León, Parma, Toledo and across Castile which is nicely contextualised by the editors in their introduction. It is a pleasure to learn that this volume is the output of three collaborative projects which have examined different aspects of the episcopacy and of commemoration. Such international partnerships are to be encouraged.

The pan-European approach taken by the editors of this volume is an important one for the results showcase what can be considered as normal commemorative practice and also what was distinctive, and especially how particular (arch)bishops chose personal strategies to perpetuate their memory. It is all too easy to forget that freedom of movement across Europe was different in the Middle Ages than it is (sometimes) today, and that the role of the Church, as the institution which bridged countries, states and cities, enabled the transmission of ideas and innovation which quickly caught the attention of monarchy, nobility, churchmen and wealthy merchants. Such innovation was manifest in their choice of tomb monuments and several essays in this collection consider the location, form and function of those commissioned for archbishops and bishops respectively. One interesting point to emerge is the question of spatial arrangements for the tomb of the deceased with the choir, funerary chapel, or processional routes often providing the setting for the grave. An important point emphasised by the essays in this volume is that there was no single "model", or single way of organising commemoration, which was applied universally and, indeed, why would there be? Regional, personal and political influences - and the interests of the cathedral authorities - framed how senior ecclesiastics were remembered and where. It is not surprising to learn that the location of tomb monuments for churchmen on the Continent was no different than those for their counterparts in England: namely at the east end close to the high altar. But it is interesting to note that cathedral dignitaries and members of the chapter were interred in the cloister: this was not always the case and in medieval London the old cathedral church of St Paul's housed the graves of past canons in the side chapels of the great cathedral. The cloister was the necropolis for prestigious Londoners.

Memory, however, was not limited to tomb monuments. This is emphasised in other essays in this volume which consider the mnemonics used in the performance of remembrance both in the written texts and in visual forms (such as glass, wall paintings, vestments, and so on). It is also reflected in what perhaps can be best described as the "construction of memory" in the physicality of new structures: Cardinal Gil de Albornoz (1302-67), for example, was commemorated by a tomb monument at Toledo, and also by his foundation of the Real Colegio de Espa&#241a in Bologna. One is reminded of direct comparisons with the foundation of educational colleges in Cambridge and Oxford and their role as commemorative institutions not only celebrating the memory of the founder, but also producing generations of graduates as products of institutionalised memory. Memoria was also served through the liturgy and it was a pleasure to read of this important focus which has, regrettably, been overlooked in other publications. The discussion on Pedro González de Mendoza (d. 1499) at Toledo demonstrates the lengths to which some episcopal patrons would go to ensure appropriate memory. In the cardinal-archbishop's case he not only appropriated the area at the high altar for himself - with the liturgical benefits of burial in this sacred space - but he paid for the construction of the altar of Santa Elena on the northern side of his tomb which contained a sculptured representation of the bishop receiving a piece of the Holy Cross from St Peter. His epitaph was carved into the walls. The location of the tomb close to an altar was important: but it was not a requirement. The notable example of bishop Bernardo degli Uberti (d. 1133) in Parma traces the story of entombment in the body of the church at his death and his later exhumation and reburial in the crypt following his canonization in 1139. It was not unusual for a saintly bishop to be transplanted but what is of note is the liturgical celebrations which took place a century later at an altar in the transept of the cathedral: intercessory masses were not always exclusively celebrated at the tomb.

The third and final point to be made about this fine collection of essays are the questions raised on image. More often than not this was in idealized form and reflected the patron's expectation on how successive generations, and posterity, would remember them. It was a desired image. It was about legacy, self-image, reinvention and, perhaps, falsehood, but also devotion. Retrospective commissions for archbishops Gero (d. 976) and Rainald von Dassel (d. 1167) in Cologne inevitably formed part of an intended message organised on their behalf by their successors. Indeed, the circumstances which identified Rainald with the Magi, the Virgin and the martyrs Felix and Nabor, reveal how his memory was entwined with the reliquaries he had brought to Cologne. The "management" of episcopal memory is a theme which resonates with activities, identified elsewhere by Phillip Lindley, on the other side of the Channel most notably at Hereford cathedral. Similarly, bishops were buried in Lausanne Cathedral along the walkway used by pilgrims to the Lady chapel. This brought them to the attention of strangers and, inevitably, to their prayers. The point is nicely made that the medieval bishop, a key player on the public stage, made the most of the theatre of memory. The tomb was a prop as were images elsewhere, whether sculptured, glazed, heraldic, in fabric or written (in manuscript and on the walls of the Cathedral and /or tomb), and the liturgy as the script. The most impressive tombs were inevitably those commissioned directly by the patron - noted particularly in Castile - and they represented the concerns of the bishop and the ways in which he intended to be remembered. Such practices enabled other props to be brought into the display and it is of little surprise to read of the proximity of carvings, such as of the crucified Christ, or of figures representing Our Lady. Memory, commemoration and devotion were all part of this performance.

This is an informative collection of essays with a clear focus on episcopal memory. It is nicely produced - with colour images a most welcome inclusion within the text - and the authors and editors are to be congratulated in bringing together the myriad ways in which cardinals, archbishops and bishops were remembered in the Middle Ages.