Evangelos Alexiou: Greek Rhetoric of the 4th Century BC 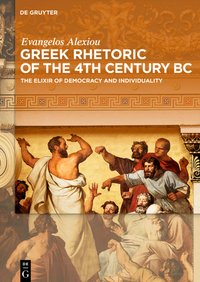 In this excellent volume, Alexiou discusses rhetorical theory and practice in fourth-century Athens, paying close attention to the social and political, as well as literary and philosophical issues of the time. The book is "a revised and slightly abbreviated form" (IX) of the original work published in Greek in 2016, and this translation will undoubtedly - and deservedly - broaden its audience immeasurably.

The book falls roughly into two halves. The first half (down to 158) covers the origins and development of rhetoric and its theoretical side, including the three Aristotelian genres of deliberative, forensic and epideictic (Chapter 1); fourth-century theoretical debates about rhetoric, with the opposition between Isocrates and Plato, and Isocrates and Alcidamas (Chapter 2); and the surviving rhetorical handbooks of Anaximenes and Aristotle (Chapter 3). Alexiou then moves on to the ancient canon of ten Attic orators, or rather, the non-canonical authors, especially Apollodorus (Chapter 4); before discussing Isocrates (Chapter 5). In this chapter, the longest in the book (unsurprisingly, given that Alexiou is one of the world's leading experts on Isocrates), he follows the three subdivisions that are traditional in surveys of the orators (their life, work and style), but adds a welcome fourth section on the transmission of the text and the author's reception (mostly in the ancient world). The chapter is a model introduction to Isocrates, with its comprehensive coverage of his educational and moral-political ideas, his ground-breaking encomia of Alcibiades in On the Team of Horses and of the Cypriot king Evagoras, and his periodic style.

A similar pattern is followed in the chapters of the second half of the book, where Alexiou discusses the practical orators of the canon, beginning with Demosthenes (Chapter 6). This is a neat juxtaposition of the leading teacher and political idealist (Isocrates) and the leading logographer and practising politician (Demosthenes); and with the extensive and perceptive treatment of Demosthenes in the book's second longest chapter, these two heavyweights, who were to remain central figures in western rhetorical education for many centuries, make up the central core of the study. The Demosthenes chapter is then logically juxtaposed with the one on Aeschines (Chapter 7), and discussions follow of Isaeus, Lycurgus, Hyperides and Dinarchus (Chapters 8-11).

The final chapter summarises each of the foregoing ones, ending with the traditional (but more recently challenged) view of the decline of rhetoric in the Hellenistic period, when "classical rhetoric, which was the elixir of democracy, lost its significance and grandeur, precisely because the vital space of its political momentum no longer existed" (309, cf. 291). These summaries are very useful, and indeed (as with most administrative reports) are the place to start for readers wanting a brief synopsis of the subject. But they do not add to what is contained in the corresponding chapters.

The monograph concludes with a Bibliography and an extensive General Index. One of the book's greatest strengths, for which it will be an essential starting-point for future scholars and students, is its comprehensive bibliographies, which are linked to each chapter rather than collected as a single whole, "for the purpose of thematic systematisation of sources" (311). These are supplemented by further references in the footnotes. The arrangement by chapter, which one expects more in a companion or edited volume than in a monograph of this kind, leads to a good deal of overlap (e.g. the very first entry, Alexiou's own Evagoras commentary, occurs six times), and it is not easy to find an abbreviated title in the correct chapter bibliography when the header to each page is simply 'Bibliography'. But on balance I think it is a good way of doing things.

It is the task of every reviewer to indicate areas where s/he has reservations about the book under scrutiny. I have very few of these. My first is the fairly obvious one, that it seems slightly odd (whatever Alexiou's justification of it on XI) to restrict the coverage of the Attic orators to the fourth century, which leads to the omission of Antiphon, Andocides and, most notably, Lysias, who was such an important figure in later literary criticism, especially Dionysius of Halicarnassus, as the model of the plain style and who (like Andocides) certainly was writing in the fourth as well as fifth century. Alexiou does discuss Lysias' speech For Mantitheus as "a characteristic example of ēthopoiia" (12), a choice perhaps dictated by the fact that he published his own interpretation of the speech in Hellenica 2001 (cf. 12 n. 54; this speech is also probably to be dated in the early fourth century); but this feels like a missed opportunity, and many readers (myself included) would have welcomed Alexiou's thoughts on the canon of orators as a whole.

It also seems odd that the chapter on Isaeus should follow those on Demosthenes and Aeschines, whether or not one puts credence in the ancient tradition that Isaeus was Demosthenes' teacher, which is apparently accepted by Alexiou (160, 168). The Isaean corpus certainly contains speeches that long antedate those of both Demosthenes and Aeschines (cf. 235), and Dionysius included Isaeus along with Lysias and Isocrates amongst the earlier orators (On the Ancient Orators 4). I presume that this order was driven by the logical and aesthetic juxtapositions mentioned above, but it hardly does full justice to Isaeus' pivotal role as "a forerunner of Demosthenes" (242) in the development of forcefulness (deinotes) in speaking.

On occasion, Alexiou makes authoritative remarks of the ipse dixit kind that might be questioned. Most are of no great significance, and indeed many would agree that "The account that Isocrates wore mourning garb after Socrates' death is apocryphal" (97), which could apply to much of what is written in the source for this (the pseudo-Plutarchan Life 838F), whose recent commentators Worthington and Roisman, however, are inclined to believe the story. But I find it harder to accept for either author that in his private speeches Demosthenes' "style might seem bland and monotonous at times, as is the case with Isaeus" (169). Again, it is certainly arguable that "the most authoritative manuscript" (189) of Demosthenes is S, but elsewhere Alexiou records "the present-day conclusion that a unilateral preference for one or more codices is not justifiable" (205).

The erroneous statement that "most judicial speeches available to us can be found in the corpus of Demosthenes" (167) clearly is missing an initial 'the' (which is included in the repetition of the remark on page 300 and in the original Greek version). Generally speaking, the translation is of a high standard, but there are misprints throughout, mostly innocuous (I smiled at the thought of tiny Oratots, 70 n. 51), but private suits had 201 judges not 210 (167); and it is an error, not a misprint, when Alexiou asserts that Lycurgus was the sole canonical author "of aristocratic origins" (305) - few Athenians were as aristocratic as the Eupatrid Andocides.

Finally, I have to note the exaggerated claim for the book made not by Alexiou himself, but in the Preface and again on the back cover, that "the so-called minor Attic orators are evaluated systematically for the first time alongside the major representatives of the art of oration: Demosthenes and Isocrates" (VII). For two of them, Antiphon and Andocides, who are the subject of the first Loeb volume of "so-called" Minor Attic Orators, are not evaluated at all, and other scholars apart from Alexiou have discussed the ones included in the second Loeb volume and here. Messrs Blass, Dobson and Usher will be turning in their graves.

These are, however, minor quibbles. There is far more to commend than criticise in Alexiou's survey, which indeed deserves to be recommended reading in all future courses on classical rhetoric.